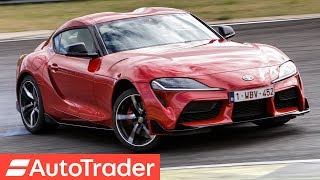 The Supra is an excellent sports car that manages to combine extravagant looks and exciting performance with a demure side that’ll make it a very usable everyday car. It was co-developed alongside the BMW Z4, meaning the two cars share plenty, and whether that's a positive thing or a negative thing will depend on your point of view. However, there's no doubt that if the idea of a Porsche Cayman or Alpine A110 appeals, make sure you've had a very good look at the Supra before spending any money.
Our verdict

Is the Toyota Supra a good car?

Running costsSafetyFeaturesReliabilityInteriorPerformance
Pricewise, the Toyota Supra sits squarely in the middle of rivals like the Porsche Cayman S, Jaguar F-Type V6 and Alpine A110, although the price of those will likely rise when you tick various options boxes. The Porsche suffers from very high service, maintenance and repair costs, which the Toyota, Alpine and Jaguar. When it comes to fuel economy the Alpine is again supreme, although it doesn’t have the power of the other cars. The Toyota is likely to be slightly easier on fuel than the Porsche or Jag, but not by much. The Porsche’s ace in the hole is its resale value, which far exceeds the opposition. For that reason alone we’d expect it to be cheaper overall to run over several years than the Toyota and Jag, which will likely be very similar to each other. The Alpine will be cheaper than all of them, due to its lower purchase price and much better fuel economy. But you will lose out on any power boasting.

With 6 new and 48 used Toyota Supra cars available on Auto Trader, we have the largest range of cars for sale across the UK.