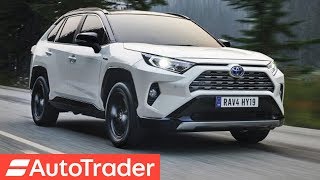 The RAV4 will appeal to many as a safe, reliable SUV with generous equipment levels, and plenty more will like the environmental credentials that its hybrid-only engine line-up provides.
Our verdict

Is the Toyota RAV4 a good car?

Running costsSafetyFeaturesReliabilityInteriorPerformance
The Toyota RAV4 doesn’t have any immediate close rivals, save perhaps for the Honda CR-V hybrid, although that has less power than the Toyota. But as their prices are similar, we’ve compared the RAV4 two-wheel drive Design model with the CR-V SE hybrid. We also looked at another car RAV4 customers might be interested in: Skoda’s Kodiaq 2.0 TDI diesel SE Technology (five seat), which again has less power, but its more powerful diesel engine is only available in high-spec trims.

What we’ve found is that, according to industry estimates, the Skoda is cheaper to buy and will get better fuel economy, as well as costing less in depreciation, but it’ll cost slightly more than the Japanese cars to service, maintain and repair. The CR-V lags behind both in fuel economy and has relatively poor resale value, so despite cheap servicing and repair costs is likely to be more expensive than both its rivals. The Skoda will be slightly cheaper to run than the Toyota overall.

One major thing to consider concerns company car tax. Because the RAV4’s CO2 emissions are much lower than its rivals, it could cost business users much less in tax, which suddenly makes the Toyota much more attractive.

With 228 new and 1,209 used Toyota RAV4 cars available on Auto Trader, we have the largest range of cars for sale across the UK.