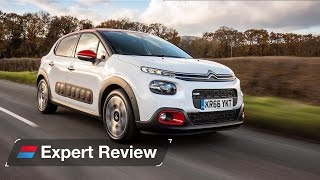 The C3 certainly isn’t a class leader among the very impressive array of superminis on offer in today’s market, because – looks aside - it doesn’t really dazzle in any single area. It is, however, a very charming and likeable little car, with bags of style and some fairly tempting equipment. And for many supermini buyers, that’ll be more important than dynamic excellence or practicality.
Our verdict

Is the Citroen C3 a good car?

Citroen C3 how good does it look

InteriorPerformanceAppearancePracticalityDriveabilityReliabilityEquipment
For many buyers, the C3’s stylish exterior will be enough to guarantee a purchase, but the funky design on the inside will also help cement the deal. Again, the design is fresh and unconventional, giving you a very chic-feeling environment to sit in. Like in the Cactus, the materials aren’t of the highest quality – a few of the panels are downright cheap-feeling – but there’s such a mixture of finishes, textures and colours that you don’t notice as much as you otherwise would. Ergonomically, though, the C3 isn’t nearly so appealing. The touch-screen infotainment system looks good and drastically cuts the number of buttons on the dashboard, but it’s also woefully awkward to use; the menus are confusing and it’s very slow to react to your inputs. And, although there’s height- and reach-adjustment for the steering, the wheel doesn’t go far enough away from you.

With 66 new and 1,959 used Citroen C3 cars available on Auto Trader, we have the largest range of cars for sale across the UK.