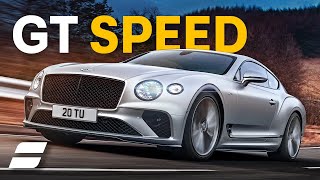 Bentley obviously doesn’t build slow cars, so when it adds the ‘Speed’ badge to the name you know you’re in for something special. So it is with the new Continental GT Speed, the most powerful car Bentley has yet made but one just as capable on twisty roads as it is the flat-out ,long-distance road trips evoked by its name. Hugely expensive, exquisitely built and – yes – incredibly fast the GT Speed is a worthy hero car in the modern Bentley range. Click here to read about the rest of the range, including the convertible.
Our verdict

Is the Bentley Continental a good car?

Running costsSafetyFeaturesReliabilityInteriorPerformance
At the time of writing Bentley still hasn’t announced a price for the Continental GT Speed but, as the saying goes, if you have to ask then you probably can’t afford it. In the context of the Continental GT range it will rank with the likes of the Mulliner version, albeit with the emphasis on outright performance and handling rather than bespoke luxury. For that extra money you get more power, more technology under the skin (more on this shortly) and, perhaps just as importantly, the bragging rights of having the fastest, most powerful and meanest looking Bentley on the block. As for running costs it’s best not to even ask, on the basis this is a 659 horsepower car powered by a 6.0-litre 12-cylinder engine. Tax, fuel costs, maintenance, insurance – all of it is going to cost a fortune. For those lucky enough to afford one that probably won’t be a problem, though.

With 680 used Bentley Continental cars available on Auto Trader, we have the largest range of cars for sale across the UK.