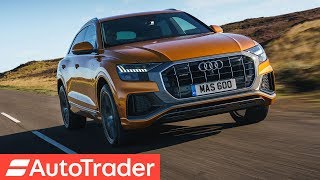 Audi’s flagship SUV is designed to be a sportier accompaniment to the company’s other big SUV, the Q7, and to that end, it has a much more aggressive look. This styling may prove to be as divisive as it is distinctive, but buyers will still be impressed by the Q8’s beautifully modern interior, plentiful technology, strong practicality and muscular performance.
Our verdict

Running costsSafetyFeaturesReliabilityInteriorPerformance
You wouldn’t expect a big flagship SUV – especially an Audi one – to be a cheap car, and it really isn’t, but importantly, the Audi Q8’s price is competitive with those of its main rivals. If you’re talking about the basic S line version, that is. The range topping Vorsprung model adds almost 20 grand to the price, which makes it considerably pricier than most rivals, but the Vorsprung model does add pretty much every optional extra it’s possible to add to the S line.

Audi has the edge on most rivals when it comes to official fuel economy and CO2 emissions figures, though, which will have much to do with a 48-volt mild hybrid system. More on that later. This system is unlikely to have any major impact on servicing costs, either, but from a wear-and-tear perspective, the fact that the smallest wheel size is 21 inches in diameter means tyre replacements will be costly. It’s also worth investigating Audi’s servicing packages to cover other consumables.

With 69 new and 84 used Audi Q8 cars available on Auto Trader, we have the largest range of cars for sale across the UK.