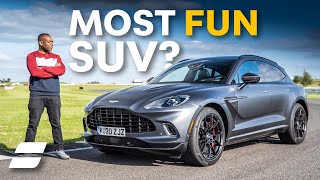 The DBX is a little late to the super-SUV party but, if you’ve been waiting for a luxurious, ultra-exclusive off-roader that really does handle as well as a sports car, look no further. We know, we couldn’t believe it, either.
Our verdict

Is the Aston Martin Dbx a good car?

Running costsSafetyFeaturesReliabilityInteriorPerformance
This is a large car from a British luxury marque and it’s not going to be cheap to buy or own, but that’s half the cachet. Insurance and VED (or ‘road tax’) will be high and, while average fuel economy is quoted at about 19mpg, don’t think you’ll get more than mid-teens to the gallon if you plan on enjoying the sound of the exhausts. Oh, and it's also in the highest bracket for company car tax. But what price an Aston? When compared with the likes of the Bentley Bentayga and Lamborghini Urus, the DBX is in good company. And looks like a bargain compared with the Rolls-Royce Cullinan.

With 20 used Aston Martin Dbx cars available on Auto Trader, we have the largest range of cars for sale across the UK.

There are no results. Search all brand new deals

There are no results. Search all leasing deals