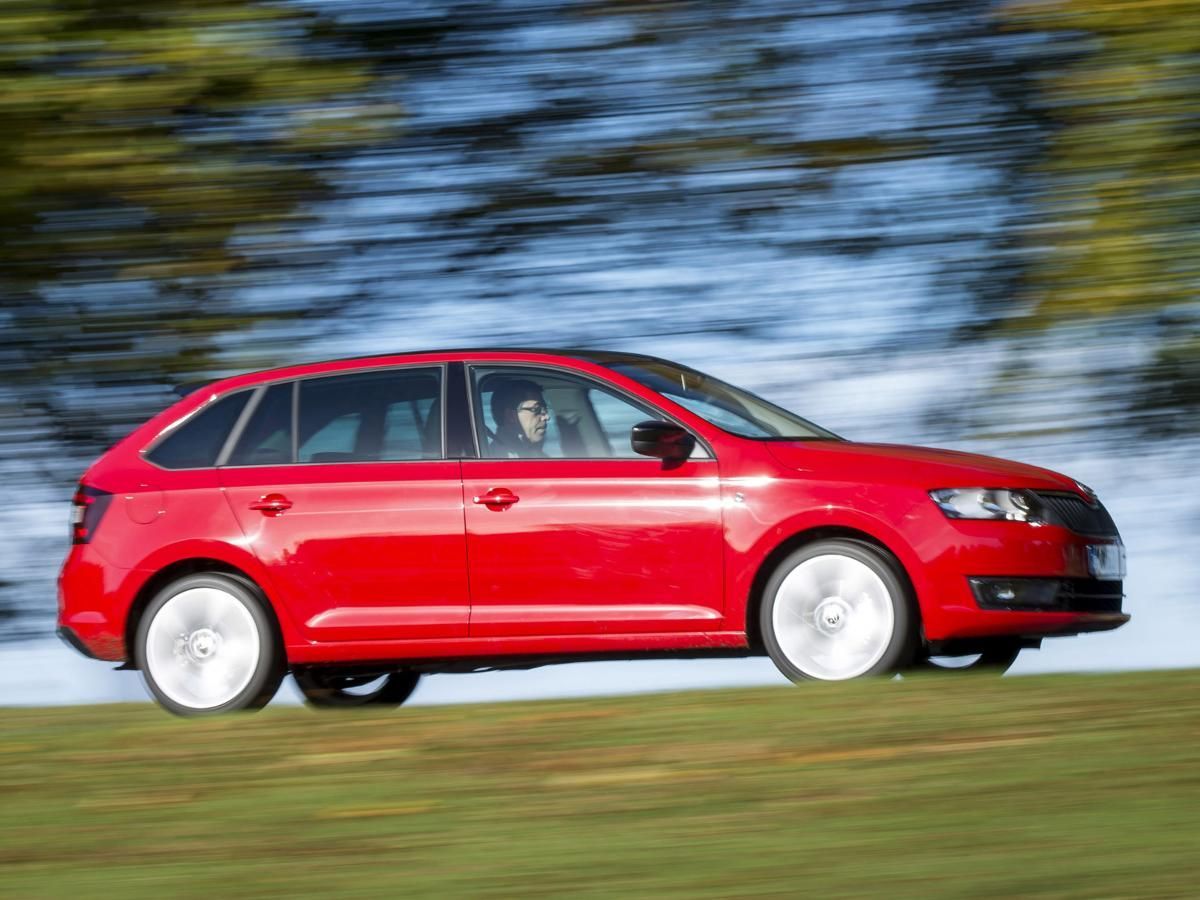 The Skoda Rapid Spaceback is a reasonably capable car in most areas, but it’s not particularly impressive in any. Space and equipment are strong points, but rivals are better to drive and higher in quality.

The Rapid Spaceback is, so says Skoda, designed for style-conscious young buyers. To us, that sounds a little optimistic. Sure, enough, the clean, crisp lines give the Spaceback a reasonably smart look, but it doesn’t exactly stand out from the crowd in the compact hatchback market. Entry-level S cars certainly don’t look much cop with steel wheels and black door handles and door mirrors. You have to go for second-rung SE trim or above for body-coloured mouldings and alloys. You can spice things up a little further by specifying the optional panoramic sunroof with extended tailgate glass.

There’s lots of adjustment for your driving position and excellent all-round visibility. The dashboard has Skoda’s usual plain, no-nonsense design, so all the controls are logically placed and easy to use, while the touch-screen infotainment system features logical menus and clear graphics. Where navigation is fitted, however, the screen is desperately slow to update. Quality is also something of a mixed bag. It has a reasonably sophisticated, grown-up feel on first inspection, because the materials on view are textured and smart-looking. However, when your fingertips probe further, you’ll find these plastics to be hard and scratchy, and the materials below your eyeline show even more signs of cost-cutting. That said, they’re (just about) acceptable for a car competing with Ceeds and i30s rather than Golfs and A3s.

Despite the ‘Spaceback’ name, this car actually has a smaller boot than the saloon on which it’s based – 415 litres compared with the saloon’s 550 litres. However, the hatchback bodystyle gives you better access to the space available due to its much bigger rear opening, and compared with the hatchback rivals the Spaceback is up against, the capacity is actually very good indeed. The Spaceback’s boot is still far from perfect, though. There’s an enormous load lip to negotiate when hauling heavy items in, and when you fold the rear seats down, the backrests simply flop down on top of the bases, leaving a loadbay that’s both stepped and angled. Where the Spaceback does deliver on its name, though, is in the passenger compartment. The rear seats have tons of headroom and legroom, so there’s space for even tall passengers to stretch out. There’s just about enough shoulder room to allow you to carry three across the rear bench, too, so long as your pals don’t mind getting friendly.

On the road, the Spaceback has a relaxed, easy-going character. The controls are light and easy while the ride feels fairly civilised over most surfaces. However, the suspension does clonk rather too much over the nastier potholes, and the ride can get unsettled at higher motorway speeds. The handling is similarly mediocre – it feels secure and predictable, but not the sharpest or most enjoyable family hatchback you’ll ever drive.

The entry-level engine is a turbocharged 1.2 petrol with just 85bhp, and while that sounds too weedy for a car this size, the engine is phenomenally sprightly. It pulls eagerly at low revs to make it flexible enough for most drivers, and it’s capable of pretty decent speed if you work it harder. Some drivers may prefer the extra punch of the 103bhp version, or the 120bhp 1.4 (which comes exclusively with a semi-automatic gearbox), but if you’re just planning to bimble about in a relaxed manner, the entry-level petrol is absolutely fine. Importantly, it’ll also cost you much less to buy, and has the lowest running costs of the petrols. The 1.6 diesels (one with 89bhp and one with 103bhp) do even better on that score, and although they’re not all that quick, they’re both flexible enough to keep life easy. However, they’re a little on the rowdy side and transmit a few too many vibrations through the steering wheel and pedals. The gearshift, too, is horribly notchy.

The Rapid Spaceback isn’t the uber-cheap offering you might expect, but it certainly sits at the more affordable end of the family hatchback spectrum. It costs less than a Golf or a Focus, with prices being more on a par with rivals from Hyundai, Kia and Seat. The Spaceback’s figures for fuel economy and emissions are par for the course, too.

There isn’t much reliability data available on the Rapid yet, never mind the Spaceback, but you can take confidence from the fact that Skoda usually does very well in the various reliability and customer satisfaction survey. The manufacturer is currently sitting reasonably pretty in Warranty Direct’s manufacturer stands, too. The interior plastics look a little brittle and flimsy in places, but the assembly is pretty solid.

The Rapid Spaceback provides all the safety kit you’d expect, things like stability control and six airbags, but it doesn’t go the extra mile. That said, although the Spaceback hasn’t yet been crash tested by the experts at Euro NCAP, they say it should provide similar protection to that of the Rapid saloon, and that’s a five-star car.

The Spaceback comes quite well equipped, provided you avoid the base-level S versions which have, air-con, remote locking and electric front windows, but miss essentials like alloy wheels and a Bluetooth phone connection. SE trim checks those boxes, along with the ones for powered rear windows, rear parking sensors, a leather multi-function steering wheel and cruise control. Elegance models add climate control and cornering foglamps, but we don’t really think these versions are worth the extra cash you’ll pay.

Practicality is arguably the Spaceback’s biggest asset, so if you want lots of space and a big boot for an affordable price, it’s worth a look. However, it’s worth bearing in mind that the Spaceback’s bigger brother, the Octavia, only costs a few hundred quid more, and offers even more practicality, a much nicer interior and a better driving experience. If it were us, we’d find the extra pennies. 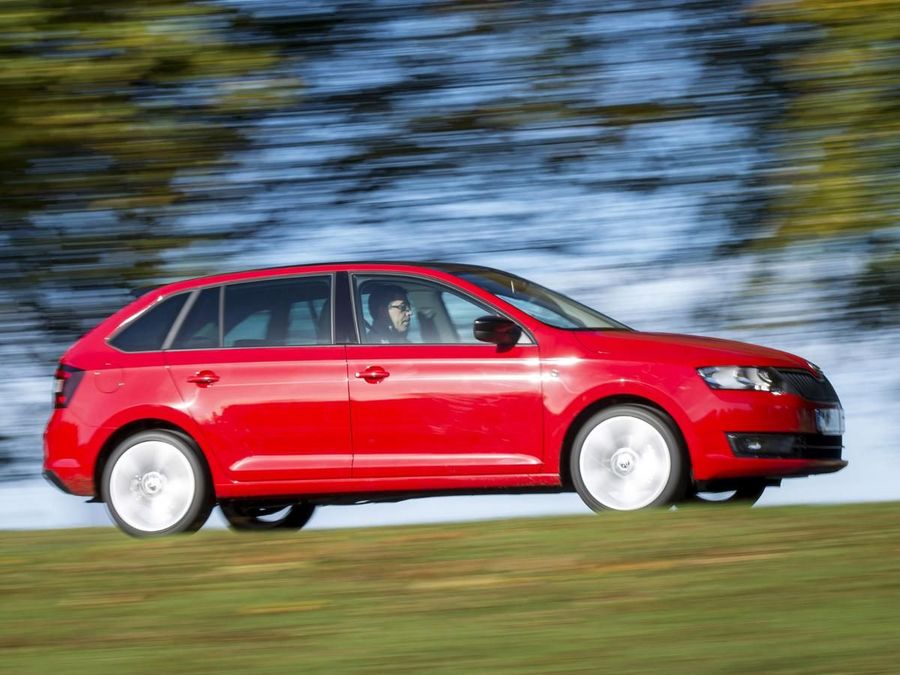