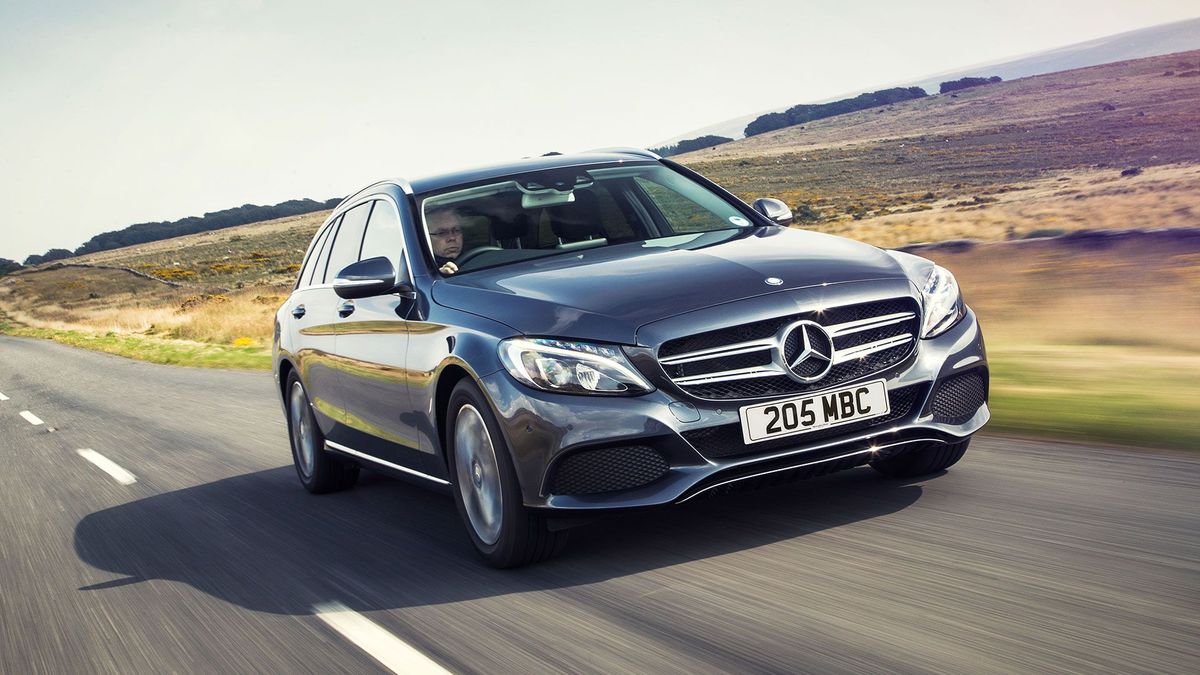 The Mercedes C-Class Estate is one of the roomiest, most practical estate cars of its type. What’s more, it offers swish looks, a strong image and a classy interior with heaps of luxury and safety kit. The efficient diesel engines also mean it’s affordable to run. Some rivals are more refined and better to drive, but nevertheless, the C-Class is a cracking all-rounder.

In a class where image counts for a whole lot, the C-Class Estate makes a very strong case for itself. The front end has curvaceous lines and swoopy details, while the rear of the car is also quite sleek, especially for an estate car. It’s nowhere near as boxy-looking as some other family wagons, and importantly, it conveys the impression of class and exclusivity you’d expect from a Merc. All versions come with alloy wheels, but mid-range Sport models get LED headlamps and more chrome exterior trim (including on the roof rails) than entry-level SE models for a slightly sharper look. AMG Line cars have a sporty body kit as well. 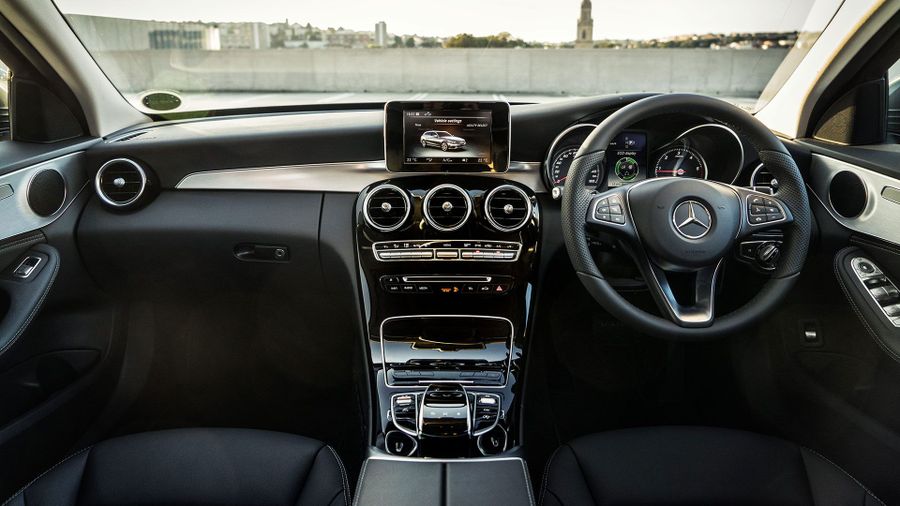 View gallery
“ All versions have dense-feeling materials, spiced up by plenty of metallic and piano black inserts ”

The good news is that the interior has just as much wow-factor as the outside. All versions have dense-feeling materials, spiced up by plenty of metallic and piano black inserts, and the simple, clutter-free design looks cool and makes things look even more sophisticated. That layout does mean that most functions have to be controlled via the infotainment system, but while rivals from Audi and BMW have more intuitive systems, the Merc’s is easy enough to get to grips with once you’re used to it. Provided, that is, you only use the central dial controller. You also get a Touchpad controller, which can be used both like a mousepad and to write out letters and numbers, and it’s much more of a faff. The only other slight criticisms are that the screen, that’s been styled to look like an iPad, looks like a bit of an afterthought. 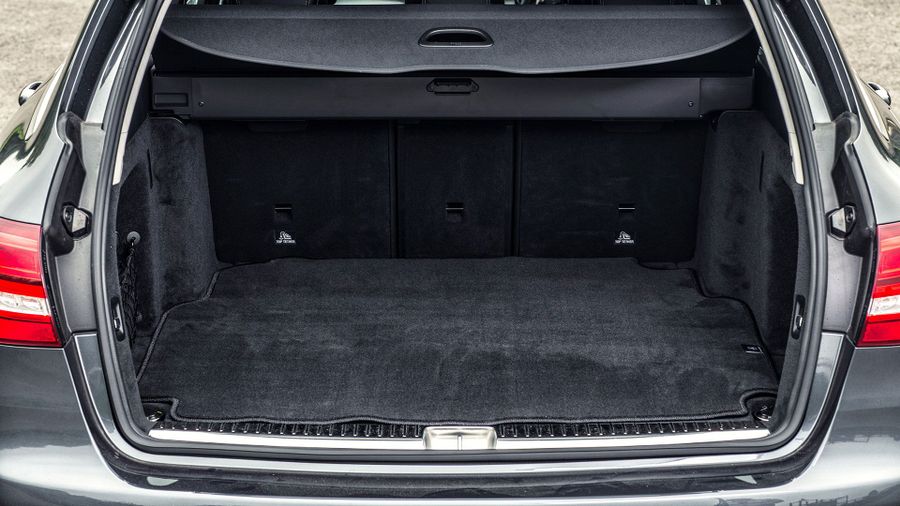 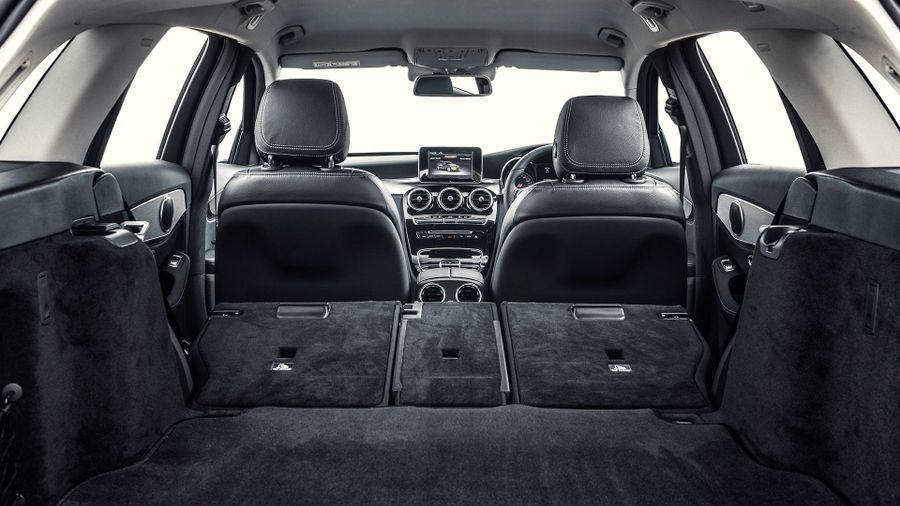 For outright boot capacity – the very reason for buying an estate car – the C-Class has very similar figures to its main rivals from Audi and BMW. You get 490 litres of space with all the seats in place, and 1510 litres when you fold them down. And, unlike the C-Class Saloon, all versions of the Estate have split-folding rear seats that allow you to do just that. What’s more, the backrests lie pretty much flat, giving you a nice level load area. Life is pretty sweet for passengers as well. The rear seats have plenty of headroom and legroom, allowing two lanky adults to stretch out in comfort, and there’s enough shoulder space for a third to fit in if needs be. However, the middle seat is rather narrow, and whoever sits there will have to straddle a wide transmission tunnel.

All versions of the C-Class come with an Agility Select switch, with modes ranging from sporty to relaxed, which lets you tailor the responses of the steering and throttle (and where fitted, the automatic gearbox) according to your mood. However, the steering is never particularly satisfying, being slow and inconsistently weighted. Each version of the car gets a different suspension setup, but none of them can rival the class best for dynamic excellence. The SE’s is the softest and smoothest, but it still clunks over potholes and you feel a fair amount of body lean in the bends. The Sport’s lowered setup gives ever-so slightly tighter control in corners, but you feel more jitter over patched-up surfaces. The AMG Line’s suspension is stiffer as well as being lowered, and when combined with the big wheels you get, the ride suffers much more than the handling improves. There is one more choice, an optional self-levelling air suspension. It delivers a smoother ride than any of the other arrangements, and it also handles more fluidly. It’s not a particularly cheap option, but it’s definitely worth adding if you can stretch to it, and pretty much essential if you’re even thinking about getting a version with bigger wheels.

Petrol engines include a 2.0-litre unit with 181bhp and 4.0-litre twin-turbo with two outputs sitting just either side of 500bhp. However, the vast majority of C-Class owners go for a diesel. The entry-level choice is the C200d with a 134bhp 1.6, and we reckon it’s the pick of the bunch. There’s no denying that it doesn’t have a lot of outright pace, but it’s flexible and eager at the bottom of the rev range, which keeps life nice and easy. It’s also the quietest and smoothest diesel engine on offer, and the six-speed manual gearbox has a pretty slick change, too. The best-seller is the C220d, which has a 2.1-litre four-cylinder engine with 168bhp. It’s pretty muscular, nipping from 0-62mph in just 7.9 seconds and giving strong in-gear flexibility. However, it’s disappointingly noisy, and you feel some vibrations through the controls. Pair it with the optional automatic gearbox, and you’ll find that gears are held for too long and shifts are rather slow when you use the paddles. The C250 has the same engine as the C220, but with power uprated to 201bhp. It has a useful performance advantage, but it’s not much more refined. 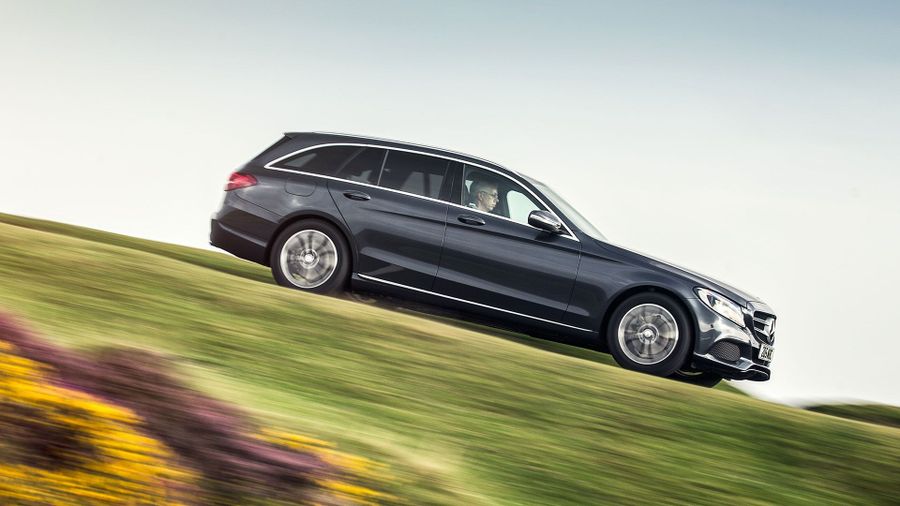 Prices are roughly on a par with those of rival offerings from Audi, BMW and Jaguar, but you do get bags of kit as standard with your C-Class. What’s more, the Mercedes has resale values that’ll match anything else in the class, which will protect your investment long-term. Company car drivers will like the low CO2 emissions given by the Merc’s diesel engines, because they mean very affordable monthly tax bills (albeit not quite as affordable as the cleanest versions of one or two rivals). Everyone will enjoy the strong fuel economy that this efficiency brings. Both the C200 and C220 diesels return upwards of 65mpg according to official figures, while the C250 is only a fraction behind.

Mercedes currently sits in a disappointing, lowly place in Warranty Direct’s manufacturer standings, well inside the bottom half of the table. However, as an individual model, the C-Class doesn’t do too badly, so it seems like it’s Merc’s other models bringing the company’s overall score down. However, it’s worth bearing in mind that repairs aren’t especially cheap if something does go wrong. 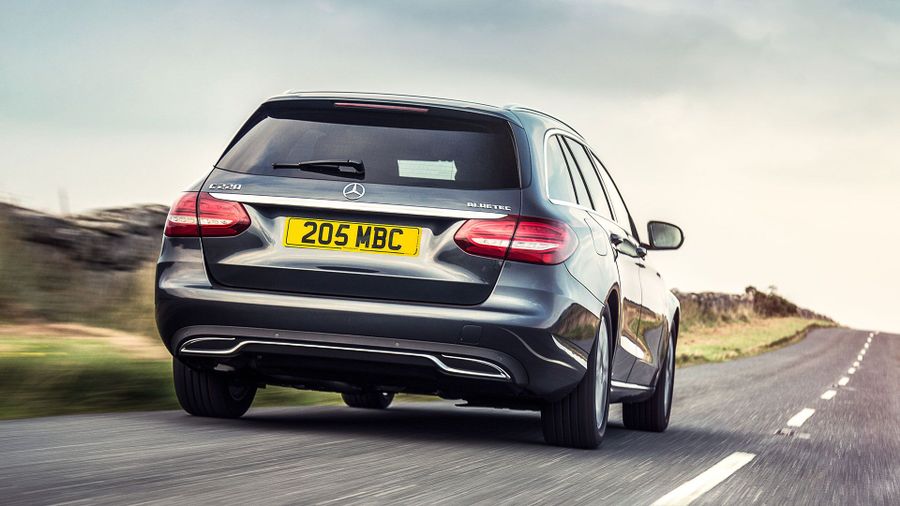 Every C-Class Estate comes with an impressive suite of safety measures. As well as stability control and a shedload of airbags, you get a pop-up bonnet to limit injuries to pedestrians, a system to warn you if you’re getting tired and a system that can sense an impending collision and apply the brakes automatically. Raid the options list, and you can have even more electrical driving aids. This collection of safety-based cleverness is a big part of why the C-Class Saloon has achieved the full five-star rating in Euro NCAP crash tests, and there’s no reason why the C-Class Estate shouldn’t perform just as impressively.

All versions come with plenty of luxury kit. Even the SE has a powered tailgate, cruise and climate controls, leather-effect upholstery, rain-sensing wipers, four powered windows, a reversing camera and a DAB radio. Sport trim adds electric folding mirrors, a parking assistant, sat-nav, heated seats and ambient lighting, while AMG Line trim adds uprated steering and brakes, along with a whole host of sporty styling goodies inside and out.

The Mercedes C-Class Estate looks the business, and with a practical, high-quality interior and generous equipment, it has most of the important bases covered. With clean, efficient engines, it’s also very affordable to run as a company car. We only wish it were a little more refined and a little more engaging to drive. Still one of the best prestige wagons, though. 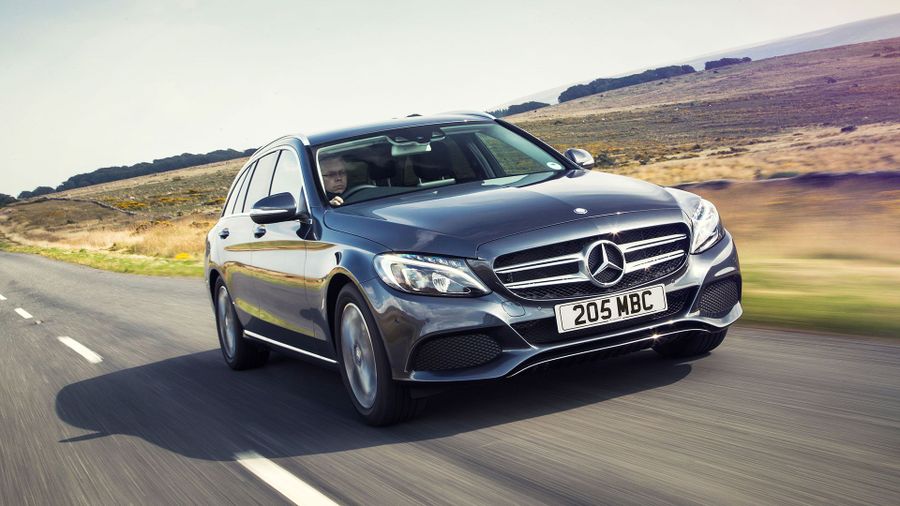 SE's suspension is smoothest of the standard setups
1/13