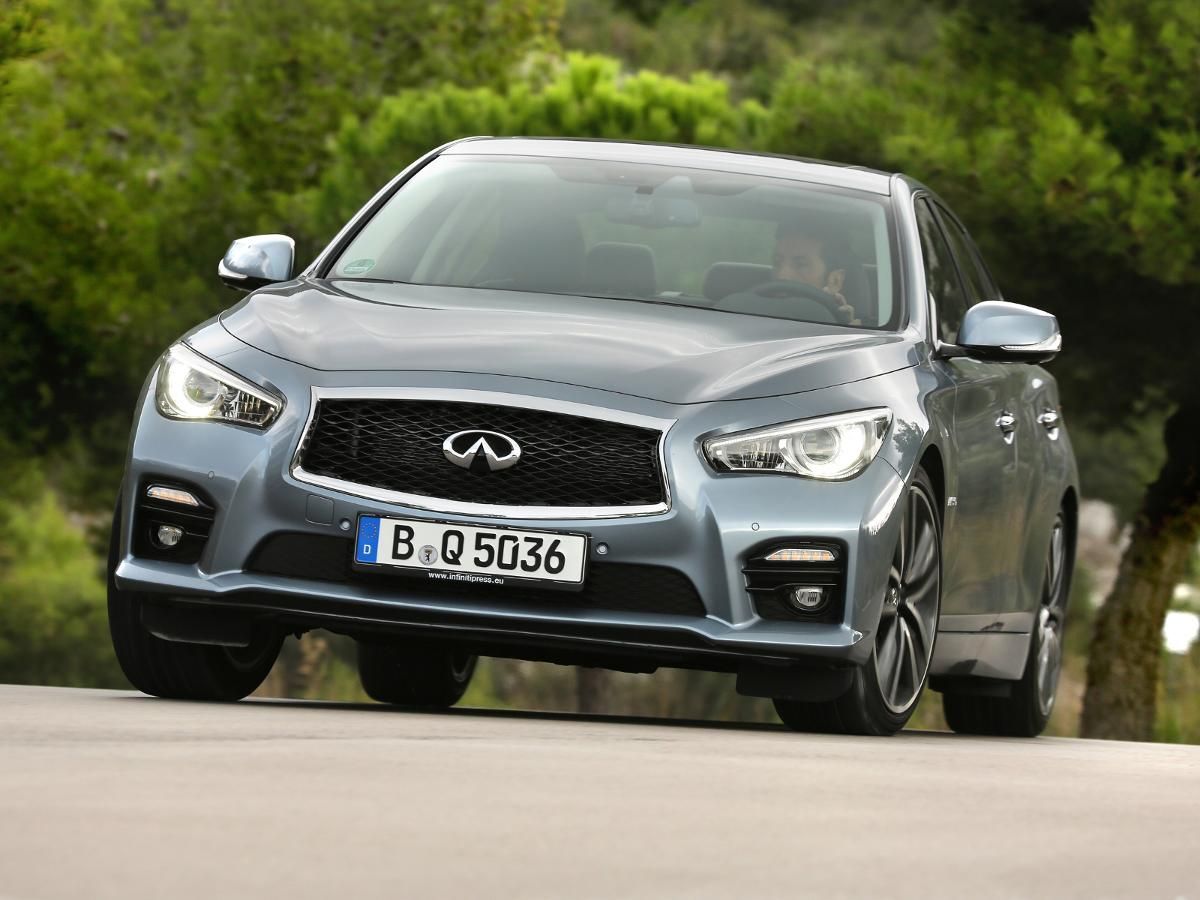 The Infiniti Q50 isn’t without its merits. It has lots of space, a big boot and an economical diesel engine. However, it’s compromised in too many other areas, and it’s not cheap enough to buy. We’d still steer you towards established players like the BMW 3 Series.

Pick of the range
2.2d SE manual
Best engine, plenty of kit and cheapest to buy
Most economical
2.2d SE manual
This version has the beating of its German rivals for CO2 emissions
Best avoided
Hybrid AWD
Powerful drivetrain and all-wheel drive makes it expensive to run

The Infiniti Q50 has a tough job on its hands, because it has to tempt buyers away from popular models like the Audi A5, BMW 3 Series and Mercedes C-Class. The styling is smart enough that the Infiniti doesn’t look out of place against its rivals, but whether it’s handsome enough to tip the balance remains to be seen. All models have alloy wheels, but they’re bigger on range-topping Sport models. These versions also have a different front bumper design and LED headlamps for a more muscular look.

The Q50 has a smart cabin that’s attractively trimmed and high in quality. Granted, the materials don’t have the same dense robustness of those in the best rivals, but the assembly is impressively solid and there’s enough sophistication to make the Q50 feel like it belongs in the executive car fraternity. The ergonomics, though, aren’t so impressive. The centre console features two screens that make you wonder which you should be looking at to operate a particular function, and it’s also quite confusing that although the screens have touch-screen functionality, part of the system is also controlled by a now-customary scrolling dial. The menus used to control various functions could be more logically arranged, too. What’s more, some drivers will wish that their seat went lower, and the foot-operated parking brake won’t be to all tastes.

Passenger space is one of the Q50’s big plus points. The rear seats are particularly generous on kneeroom, allowing leggy passengers to travel comfortably. Rear headroom might be a shade tight for those much over six feet tall, but it’s competitive by class standards. So is the 500-litre boot of the diesel model, which actually has its rivals beaten for capacity. However, there’s a narrow, oddly-shaped aperture between the boot and the passenger compartment when you fold the back seats down, and the load area is heavily sloped. And, in the hybrid version, the extra technical gubbins reduces the boot to 400 litres, plus does away with the folding rear seat altogether.

The Q50’s ride has a firm edge that felt abrupt over the few bumps we found on the smooth Spanish roads of our test route. We suspect that when faced with the rutted surfaces of the UK road network, the suspension could have a hard time keeping you comfortable. The payoff for this firmness is tight body control, and combined with the strong grip and the even weight distribution, it makes the Q50 change direction with reasonable sharpness. However, the handling is ruined by the steering. It has a large dead-zone around the straight-ahead, but is really quick once you turn past it. That makes it feel unnervingly twitchy, and the situation isn’t helped by the strong self-centring action. There’s another steering system available, which replaces the mechanical setup with a digital system. Unfortunately, this system is even worse. You get absolutely no information about what the front wheels are doing in a bend, so you feel eerily and unnervingly detached from the car. In its sportier modes, the steering will be too fast for many drivers, and whichever mode you select, the weighting is horribly inconsistent and unpredictable.

Most buyers in the compact executive class go for a diesel engine, and the one in the Q50 is the same 168bhp 2.1-litre four-cylinder unit you’ll find in one of the car’s major rivals, the Mercedes C-Class. It gets rather rowdy when you take it above 3000rpm, but most of the time, the noise insulation is pretty good. So is performance, with decent urge from low down and strong pull in the mid-range. We’ve only tried the engine with the optional seven-speed automatic gearbox (a manual six-speeder is standard), and although the shifts could be faster, they’re smooth enough. The hybrid version uses its electric motor to enhance performance rather than economy, and the combined power of the electric motor and 3.5-litre V6 petrol engine comes in at 359bhp. It’ll see off the 0-62mph dash in an impressive 5.1 seconds, and feels just as quick as the numbers suggest.

Prices for most versions are reasonable, but you’ll only pay a few hundred quid less than you will for the equivalent A4, 3 Series or C-Class, and we think the difference should be bigger. In fact, it’s entirely possible that the Q50 could cost you more than the German cars in the long run, because the Infiniti won’t hold its value anything like as well. This’ll also have an effect for company car drivers, because weak residuals will push contract hire rates up. The Q50 is more efficient than its German counterparts, though; the diesel returns 64.2mpg and emitting CO2 at a rate of just 114g/km when paired with the manual ‘box, and that places it in a lower company car tax band than all its rivals. Be warned, though – those figures get worse if you go for the range-topping Sport trim (62.8mpg/118g/km), probably due to the bigger wheels, and decline further if you specify the automatic gearbox (58.9mpg/124g/km). The hybrid, meanwhile, will return just 45.6mpg, and that drops to 41.5mpg if you go for the all-wheel drive version.

Infiniti is too small a brand to be included in most reliability surveys, but the fact it’s part of the Nissan group should provide confidence that the company’s products will stand the test of time. The warranty lasts three years or 62,000 miles, which is reasonable, but nothing special.

All Q50s get safety must-haves like stability control and six airbags, and the car has achieved the maximum five-star rating in Euro NCAP crash tests. What’s more, higher end versions come with all sorts of clever safety aids. Cars with the adaptive steering also have a system that helps prevent you wandering out of your motorway lane, while an optional Safety Shield Pack is available that provides radar cruise control, lane departure warning, blind spot warning and forward emergency braking.

Even entry-level SE trim comes with plenty of goodies including alloys, keyless entry, cruise and climate controls, Bluetooth, automatic lights and wipers, a leather multi-function steering wheel and front and rear parking sensors with a rear-view camera. SE is certainly the one we’d choose. Premium trim adds heated heather seats and a different interior trim, while Sport models have a LED headlamps, powered steering adjustment and the drive-by-wire steering system.

Because you’re bored with the established players in the compact executive market. Unfortunately, for Infiniti, though, the Q50 is too compromised in too many areas to be a genuine alternative to the dominant German offerings. 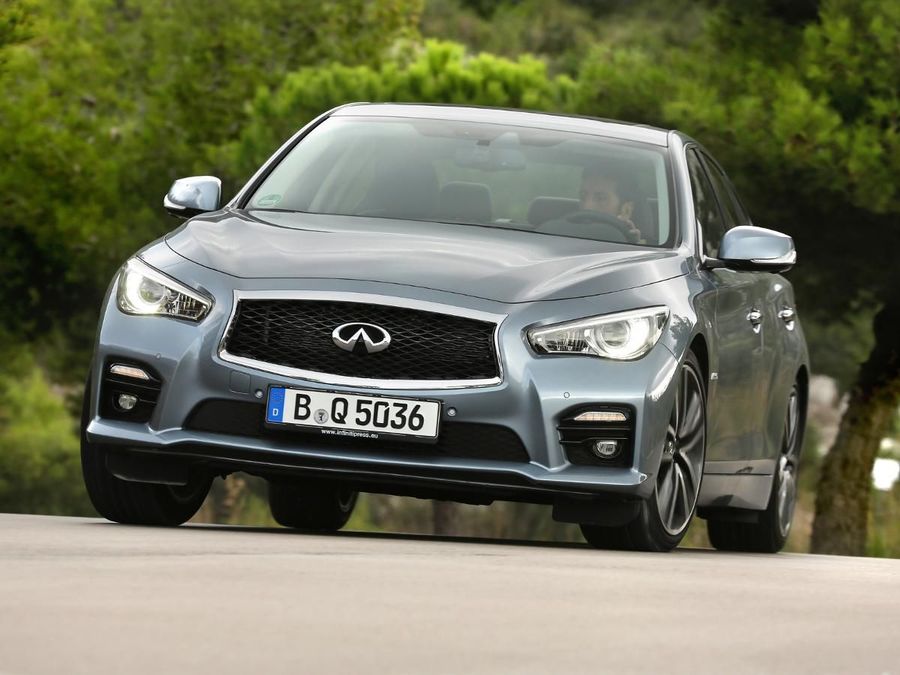