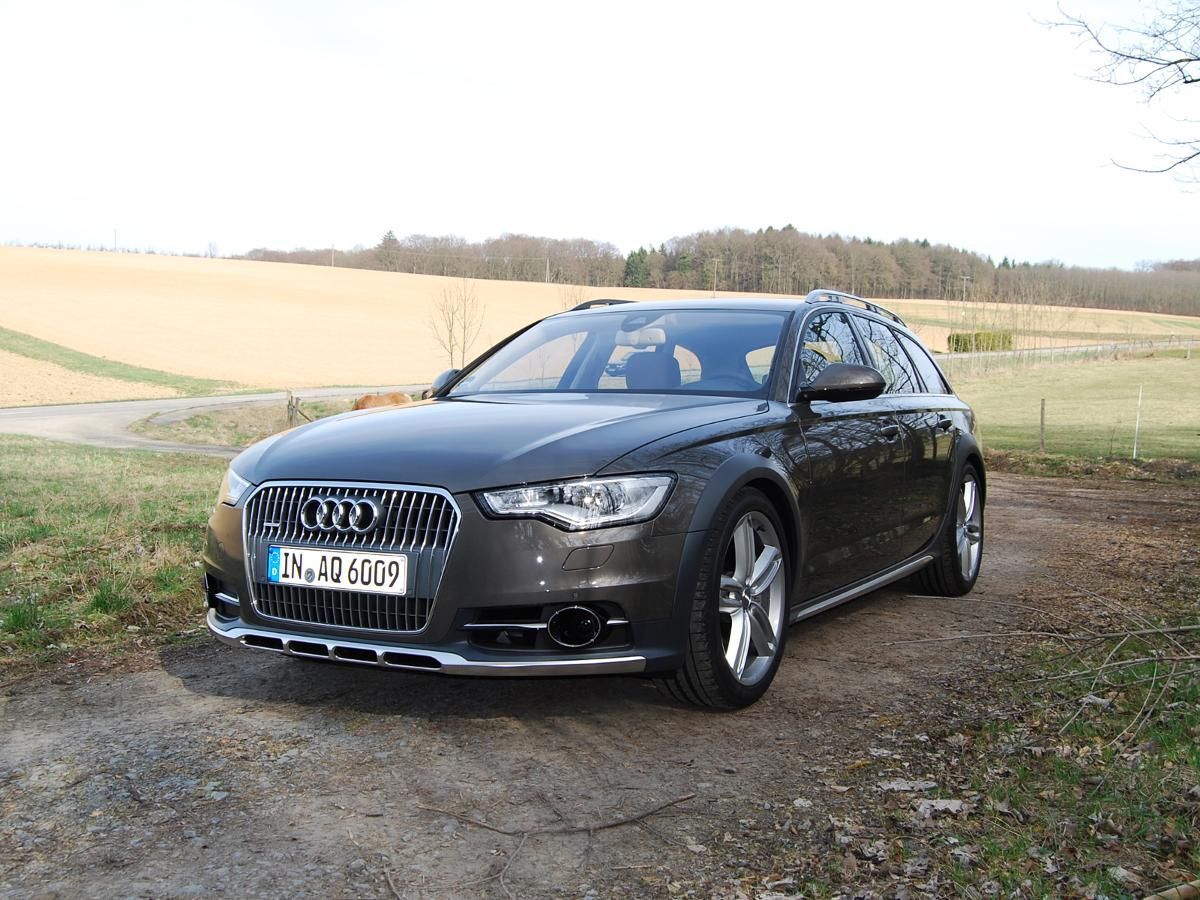 Audi’s latest mud-plugger A6 follows in the mould of its predecessors: offering off-road capability in a package that shows little compromise over the standard car. It’s a superbly subtle 4x4; though for most, the abilities of the cheaper Quattro A6 Avant will be more than enough.

Audi’s trademark subtlety hasn’t been lost in converting the discreetly handsome A6 into a go-anywhere mud-plugger. The A6 allroad is targeted at those who find the image of a traditional 4×4 a turn off. It has a raised ride height and metallic off-road bash plates front and rear, but otherwise it’s business as usual. Even the contrasting wheel-arch extensions can optionally be finished in the body colour, to further maximise the allroad’s stealth appeal. Audi hasn’t been completely restrained with the tarty details: the trademark trapezoidal grille, for instance, is now finished in chrome. It’s a desirable object, though, and when’s the last time you heard that about a soft-road estate?

The cabin, of course, is Audi’s trump card. The A6 allroad is a supremely refined and comfortable place to sit. It’s a tactile delight too, with passengers treated to Milano leather seats and expensive looking soft-touch plastics. Go for the cool brushed aluminium trim and the interior ambience exudes precision and modernity. Things can go slightly awry if you try some of the more adventurous wood inlays – the bamboo of our test car was a distinctly incongruous addition – and some of the ergonomics are slightly questionable, with minor adjustments to temperature or fan intensity requiring multiple button pushes. It’s all solidly put together, however, and can be loaded with tech, like Google Maps based sat-nav, night vision and a high end Bang and Olufsen stereo with tweeters that rise from the dashboard.

The cavernous boot of the regular A6 Avant is unchanged, meaning 565 litres of space with the rear seats in place and 1,680 litres when they’re folded flat. The boot also comes with a plethora of nets and rigid guide rails, which can be positioned infinitely across the load bay to secure objects of almost any shape and size. The cabin has space enough for four adults to travel in comfort, with room for a fifth on the rear bench on shorter trips. Parking this near five-metre estate is a doddle, thanks to standard fit front and rear parking sensors. If that’s not enough, you can even specify Audi’s Top View system, which utilises discreetly installed cameras to give a bird’s eye view of the car – making getting into even the tightest spaces child’s play.

The allroad’s air suspension can be adjusted from the cockpit to suit your mood and the road surface you’re on. Sport mode gives noticeable firmness, with imperfections in the tarmac relayed back into the cabin. Comfort mode takes the edge off, but the car feels less in control of its mass, with a vertical bounce over bumps and slightly more roll in corners. The allroad setting raises the ride height for easier progress in the rough stuff. Thanks to the Quattro four-wheel-drive system, the allroad feels immensely planted and stable in corners. Keen drivers may bemoan its lack of handling finesse but most will revel in the allroad’s unflappable all-weather ability. The steering is direct, if lacking in feel; but with so much grip on offer, it isn’t a serious problem.

To give the allroad the muscle to go with its beefy persona, the engine line-up is limited to 3.0-litre V6s, three diesel and one petrol. It’s the diesel units which impress most. All give the necessary pulling power for relaxed off-road driving and return impressive fuel economy. The entry level (and most efficient) version offers 201bhp. It’s capable of hauling the allroad’s not inconsiderable 1,900kg bulk from 0-62mph in 7.5 seconds whilst still returning 46.3mpg. The mid-range 245bhp version is expected to be the best seller however, as it’s the best compromise between power and economy. Its power output may seem lacking given the size of the car, but its large amount of low-down grunt hauls the allroad down the road at an impressive rate. Thanks to twin turbochargers, the top of the tree 313bhp diesel is even more impressive. Its mountain of pulling power endows this unassuming estate car with eyebrow raising levels of performance and allows for effortless mile munching. The 306bhp petrol V6 is equally as quick, but needs to be wound up further before it gives its best. Weirdly, it also sounds muted and reserved next to the rorty diesel motor, which has trick exhaust plumbing to give a sportier sound. All engines are mated to Audi’s seven-speed S tronic twin-clutch automatic gearbox as standard, except for the twin-turbo diesel, which gets an eight-speed conventional auto.

The lack of small, four-cylinder engines in the line-up means the allroad doesn’t fare as well as the regular A6 Avant in terms of running costs. That said, Audi has gone to great lengths to keep fuel consumption and CO2 emissions as low as possible. The allroad is 70kg lighter than the outgoing model, thanks to extensive use of aluminium in the body shell, and there’s also an on-demand oil pump and brake energy recuperation. Every engine comes with stop and start as standard and you can even specify low power consumption LED headlights. The results are impressive, with CO2 emissions ranging from 159-206g/km – significantly lower than the less powerful Volvo XC70, the allroad’s closest comparable rival. The least powerful diesel will return 46.3mpg on the combined cycle, and even the 3.0-litre petrol will manage 31.7mpg. Strong residual values are expected, due to the desirability of the Audi badge.

While the A6 generally enjoys a reputation for reliability, brake and suspension issues surfaced on the previous generation allroad. While not known to fail, the Quattro four-wheel-drive setup will bring about some eye-watering bills if it needs attention. On the whole, however, the A6 range has proved to be dependable, and is impeccably well constructed.

The Audi A6 scored a full five stars in Euro NCAP crash testing, with high scores for both adult and child occupant safety. It’s loaded with safety kit too, from ‘pre-sense’ collision mitigation to night vision with pedestrian detection. The inherent road-holding advantages of the Quattro four-wheel-drive system are aided by Audi’s latest Electronic Stability Programme, ensuring steadfast grip in all conditions.

As a premium addition to the A6 line-up, the allroad comes with a generous standard specification. Memory card based sat-nav, Bluetooth telephone connectivity, Milano leather seats and 18-inch alloy wheels all make an appearance, as well as a standard fit retractable 6.5 inch display. The extensive options list is broken down into a number of packages, which represent a saving over individually specified items. The Technology Pack includes Audi Connect internet connectivity, which brings Google Earth mapping to the upgraded sat-nav. Adaptive Cruise Control, Active Lane Assist and a blind spot monitor can also be added. The Comfort Pack adds a rear parking camera, keyless go and electrically adjustable seats with memory function.

For most, the all-weather practicality of the regular A6 Quattro will be more than enough. But if you really need a car that’s as happy towing a horsebox up a muddy field as it is making an entrance at a posh hotel, the A6 allroad presents a compelling proposition. 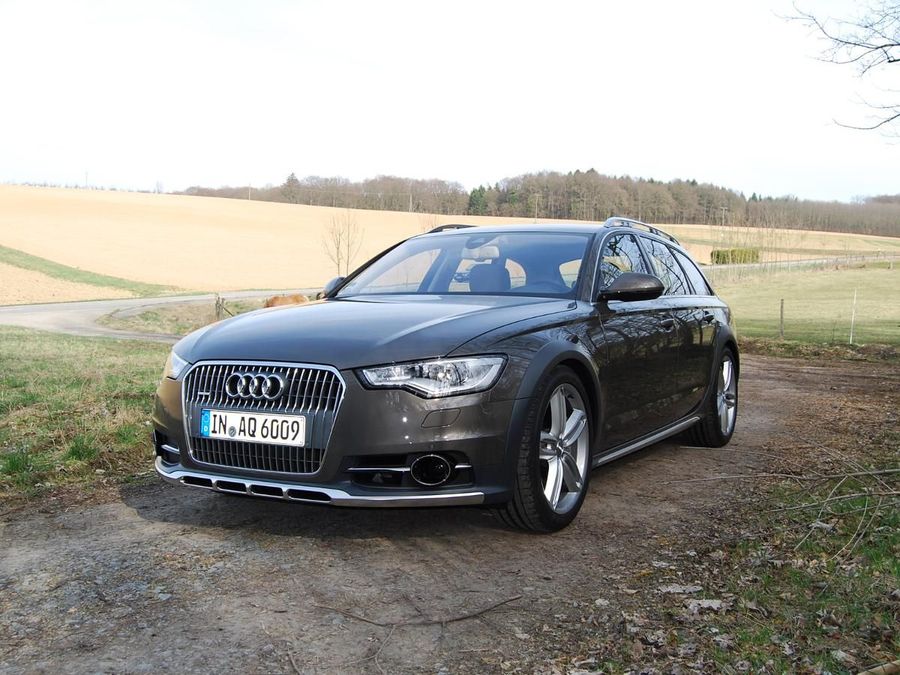