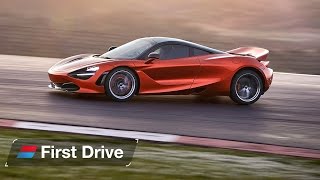 Even when compared with other supercars, the McLaren 720S really is something special. It uses an incredible amount of performance-enhancing technology to maximise its dynamic excellence, but at the same time, still manages to deliver a level of analogue sensation and feedback that is essential in any supercar. Engaging, absorbing and thrilling, and for our money, it’s the best of the supercar breed.
Our verdict

Mclaren 720S how good does it look

InteriorPerformanceAppearancePracticalityDriveabilityReliabilityEquipment
McLaren has tried to remove as much plastic as possible from the cabin of the 720S in order to hike up the feeling of quality and sophistication, replacing it with leather and alcantara finishes, along with new milled aluminium switches. It all looks good and feels solid, even if it doesn’t quite feel like the revolution in quality McLaren claims. What does feel like something of a revolution, though, is the amount of glass that surrounds you – achievable thanks to the clever design of the body – because it makes the cabin feel light and airy and gives you all-round visibility unmatched by any other supercar. The driving position is spot-on for a car like this, with a low-slung feel, and thanks to narrower door sills, it’s a little easier to get in and out than it is with most rivals. What’s not quite as easy, though, is the way the portrait-orientated touch-screen infotainment system works. The various functions are arranged and accessed in some rather counter-intuitive ways, it takes rather too long to transition between screens, and the system doesn’t always do what you tell it at the first time of asking.

With 53 used Mclaren 720S cars available on Auto Trader, we have the largest range of cars for sale across the UK.