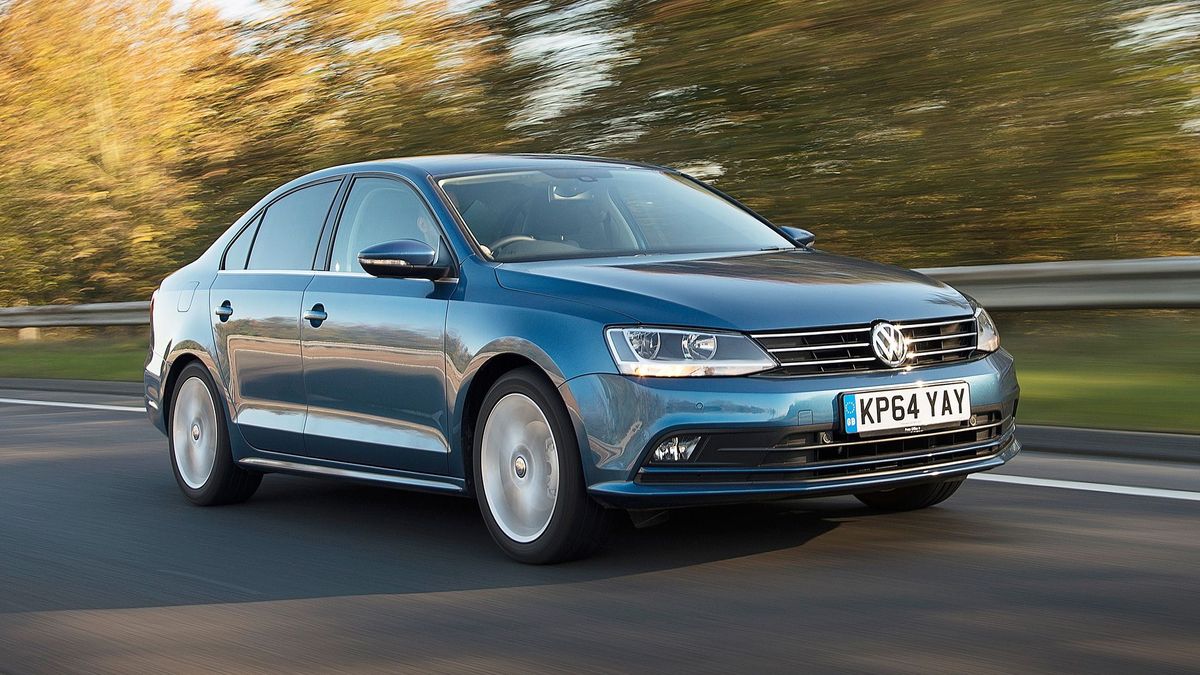 The Jetta’s problem is not that it’s a bad car, but rather that other (much better) cars from within the VW range really show it up in every single area. Next to them, it feels dated and more than a little rough around the edges when it comes to refinement, ride, and build quality. Yes, the Passat is a little dearer, but it’s also worth every penny.

Pick of the range
Jetta 1.4 TSI SE
The cheapest model with SE trim is the most compelling buy in the range
Most economical
Jetta 2.0 TDI 110 with manual gearbox
Average fuel economy of more than 70mpg, with CO2 emissions of 105g/km
Best avoided
Jetta 2.0 TDI 150 GT
If you’re going to spend this much on a VW saloon, spend it on a Passat 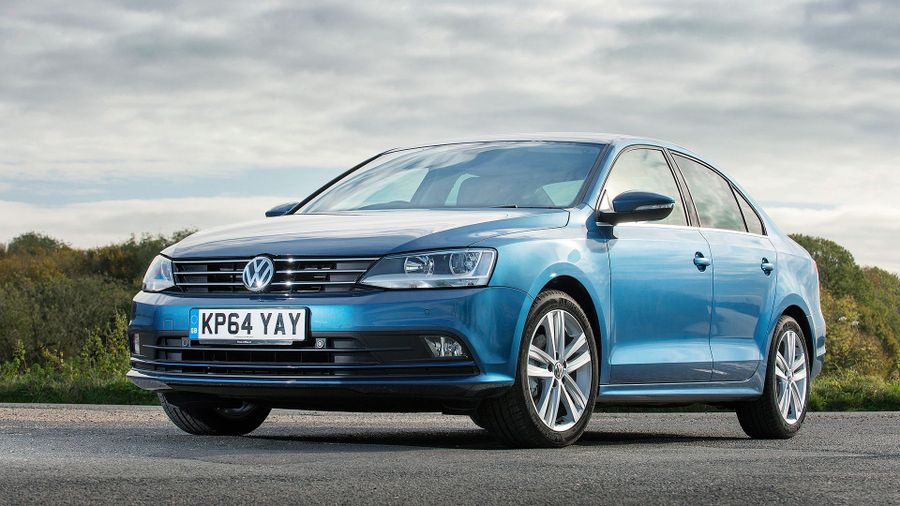 View gallery
“ It’s less of a Golf-with-a-boot and more a case of ‘Honey, I shrunk the Passat’ ”

VW has worked hard to give the Jetta its own identity within the company’s range. As a result, it’s less of a Golf-with-a-boot and more a case of ‘Honey, I shrunk the Passat’. At the front, the Jetta clearly takes much of its style from its larger brother, with its grille and headlights in particular very similar. Mind you, that’s no bad thing, as the Passat is one of the most elegant family cars on the market. True, the Jetta isn’t quite *that* elegant, but it does have a certain something, at least in the higher trim levels. Even the base, S-trimmed car looks pretty smart, with body-coloured bumpers, mirrors and door handles, as well as a chrome-trimmed grille. However, you need to go for SE trim to get standard alloy wheels, while the range-topping GT models sit a little lower and have an extra chrome strip on the bottom of the side windows and tinted rear windows. 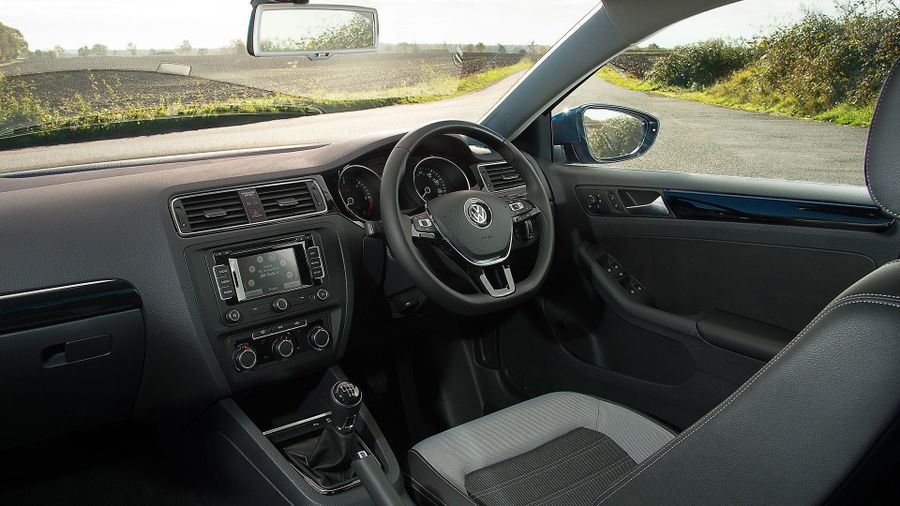 View gallery
“ The Jetta isn't poor; it’s just that you don’t have to look too far to find little details that disappoint ”

The trouble with the Jetta’s cabin is that, while it’s pure Volkswagen, it’s previous-generation Volkswagen. The Golf and Passat, in particular, show just how far the company can go; and, while it’s not that the Jetta is a disaster – indeed, the soft-touch materials across the top of the dash are very classy – it’s just that you don’t have to look too far to find little details that disappoint. For example, the plastic around the centre console and on the door panels is hard and scratchy, while the ill-fitting lining in the lidded cubby behind the handbrake is something you don’t expect. Likewise, the more modern switches and infotainment systems in other VWs show up the Jetta’s. On the other hand, the Jetta feels robust, and the driving position is excellent, with the wide range of adjustment on the seat and steering wheel allowing almost anyone to get comfortable.

The Jetta caters very well for passengers – but only for four adults. Up front, there’s loads of room for a couple of six-foot (and beyond) adults, and although the rear seats are set a little higher than the front, passengers back there will need to be well over six foot tall before they have to worry about their heads touching the roof. Similarly, legroom in the back is excellent and, thanks to the way the rear seats are sculpted, two passengers will be very comfortable. However, there are some drawbacks: the shape of the rear doors means that tall passengers need to duck their heads to get in; and, space in the centre seat is restricted, firstly by the fact that it is narrower than the outer two, and secondly by the raised tunnel in the floor. It’s a similarly mixed story in the boot: while the 510-litre capacity is excellent, the car’s saloon body style limits its practicality. It’s very awkward to get anything from the furthest reaches of the boot; and, when you fold down the split-fold rear seats (standard from SE trim upwards) they don’t lie completely flat. To make matters worse, dropping them is an awkward job, as you have to pull a release in the boot before going through the rear doors to fold the seats down. 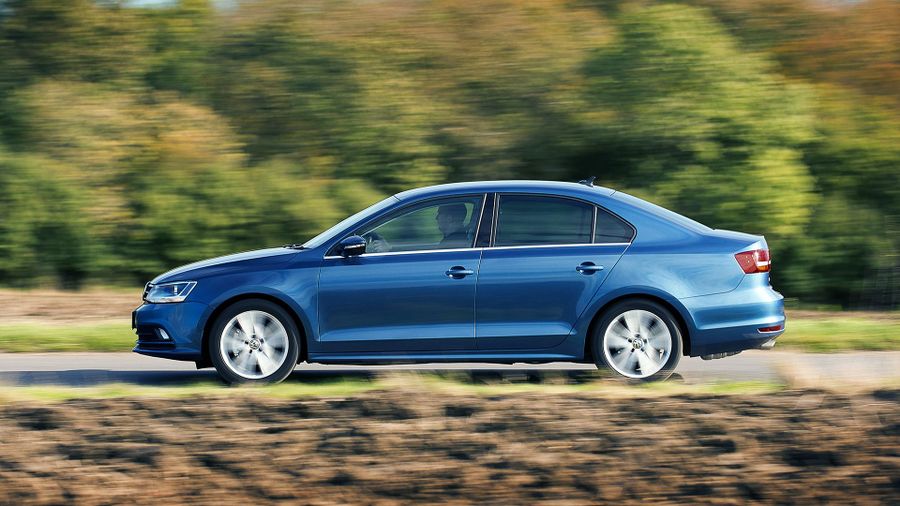 View gallery
“ Even on A-roads and motorways, the ride never seems to completely settle ”

In common with most mainstream Volkswagens, the Jetta seems to be trying to focus on comfort, but it does no more than a reasonable job. Thing is, when the car encounters anything other than a smooth road – an all-too frequent occurrence in the UK – it struggles to deal with it effectively. It’s at its worst around town and at low speeds – when it thumps and bumps its way around – and it does get better at higher speed, but even on A-roads and motorways the ride never completely settles. The handling, too, is a case of good, but could be better. The steering has precious little feel and, compared to more modern VWs (built on a lighter platform), the Jetta doesn’t feel as agile or involving. Still, it handles no worse than other affordable saloons in this class, and better than, say, a Kia Optima or Hyundai i40.

The Jetta has a relatively limited range of engines – as befits the relatively limited appeal of a saloon in this area of the market – and so far we’ve only tested one, the 108bhp version of the 2.0-litre diesel. You can also choose a 148bhp version of the same engine, while the 1.4 TSI petrol engine also comes in two states of tune, with either 123- or 148bhp. Although the 2.0 TDI 110 is the least powerful of the Jetta’s four engines, it does a perfectly good job, with a decent spread of power across the rev range above about 1,500rpm and enough power to get the car around town without having to work it too hard. On the open road, you feel its limitations a little more, and with just a five-speed gearbox (every other engine has a six-speed ‘box), you need to work it rather harder, which betrays the fact that it’s far less refined than modern 1.6-litre units.

The real attraction of the Jetta is that it’s a Volkswagen saloon that costs less than a Passat. However, it’s not that much less, and you can get into the Jetta’s larger brother – which we expect to have stronger residual values - for not much more. Then, if you don’t mind a hatchback, there’s the ever-popular Golf, which costs much the same to buy in its most basic form, but will be cheaper to run. Still, that’s not to say the Jetta is especially costly, and indeed every model averages more than 50mpg, while every diesel-engined model averages more than 60. Those are decent, if not exceptional figures for the class. There are better company cars out there though, and the Skoda and Seat versions of the Jetta - the Rapid and the Toledo - are more affordable still. 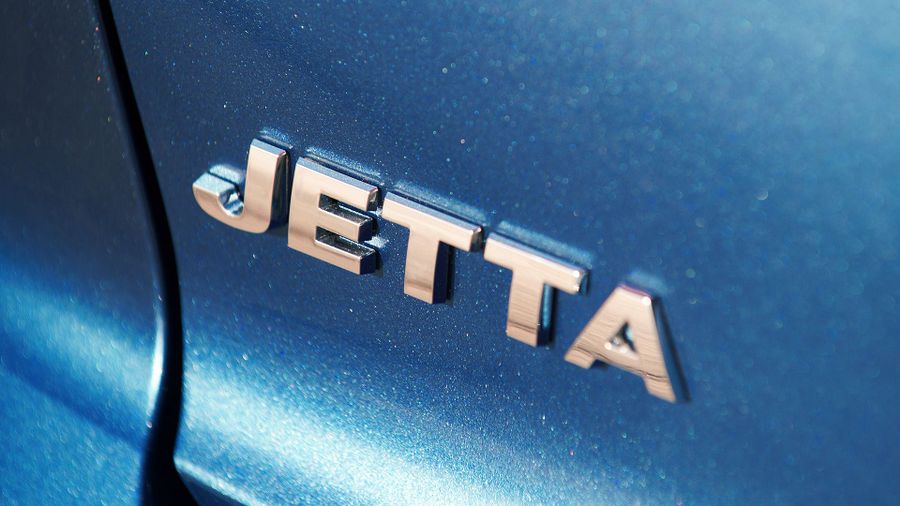 Volkswagen may have a reputation for reliability, but it’s not necessarily borne out by the facts. The company sits a little below average in Warranty Direct’s Reliability Index, and this Jetta’s predecessors, the Jetta and Bora, also rate a little below average. However, owners on our website report faultless reliability from the latest Jetta, and the fact that it uses proven technology bodes well for the future.

The Jetta hasn’t been crash-tested since it was revised in late 2014, but the 2011 model (which is based on fundamentally the same structure as this car) achieved the maximum five-star rating from Euro NCAP when it was launched. Every model comes with six airbags as standard, as well as stability control, while SE and GT models can be specified with an optional blind spot monitoring system. However, there are none of the more modern active safety systems you can get on the Golf and Passat, such as lane departure warning and autonomous emergency braking systems.

The Jetta comes in S, SE and GT trims, and even the most basic models have a DAB radio, air-conditioning, all-round electric windows and remote central locking. However, we think it’s worth upgrading to SE, which brings a smarter interior, split-folding rear seats, Bluetooth, cruise control and an iPod-compatible stereo. The extras on top GT trim are primarily aesthetic, but you do also get sports suspension and automatic lights and wipers. However, with any trim, you’ll need to venture to the options list if you want luxury goodies like climate control or sat-nav.

Essentially, the appeal of the Jetta lies in the fact that it’s a Passat Lite – a VW saloon for a little less money than its bigger brother. However, in terms of its kit, space and drive, it’s very clear where why the Jetta is so much cheaper, and why you're paying less. 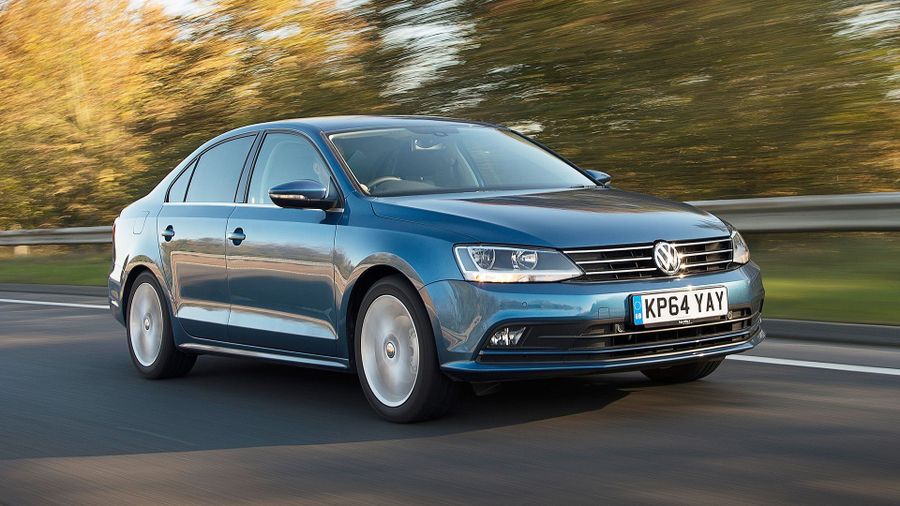 Unusually for a Volkswagen, the Jetta suffers from too much road noise at speed
1/20