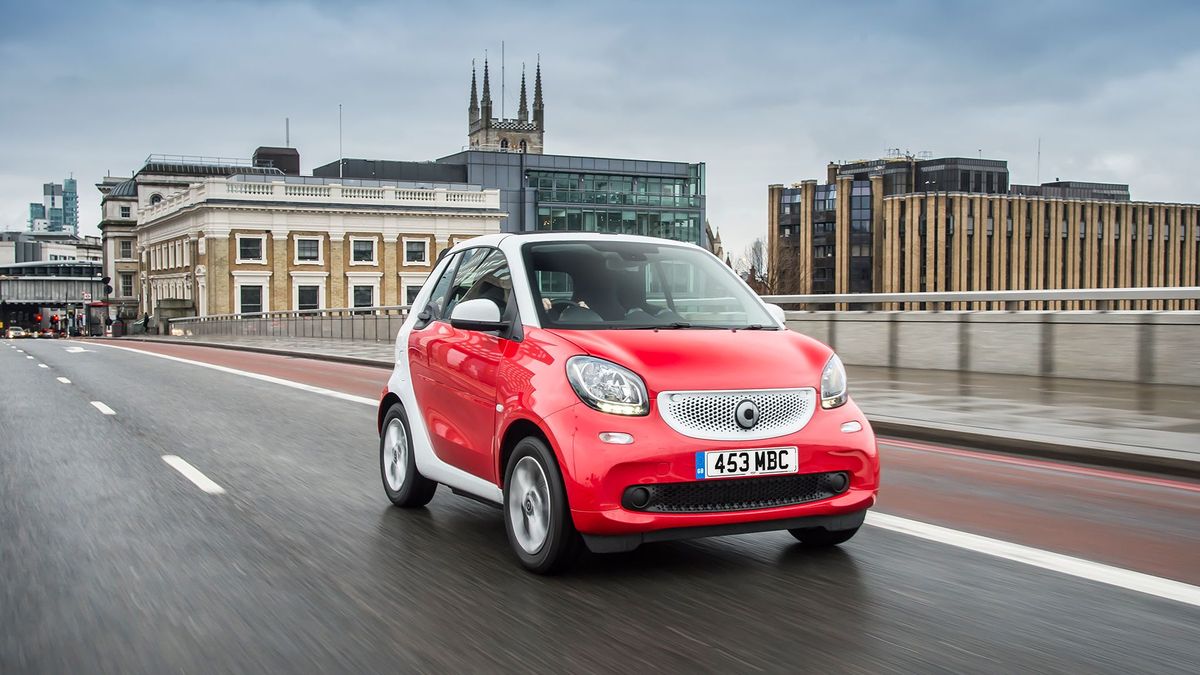 The ForTwo Cabrio is quite expensive for what it is, but it does give genuine wind-in-the-hair fun, and nothing at else at this price can do that as effectively. It also gives the Cabrio an extra dimension over the hard-top version as a city car. And, for all its shortcomings – not least the limited practicality, restricted visibility and unsettled ride – the ForTwo Cabrio is a very appealing little car.

Pick of the range
ForTwo Cabrio Prime 90bhp auto
Not cheap, but a perfect companion around town
Most economical
ForTwo Cabrio Electric Drive
Expensive to buy but gives you zero-emissions motoring
Best avoided
ForTwo Brabus
Every version has a firm ride, but the lower sports suspension makes it almost unbearable 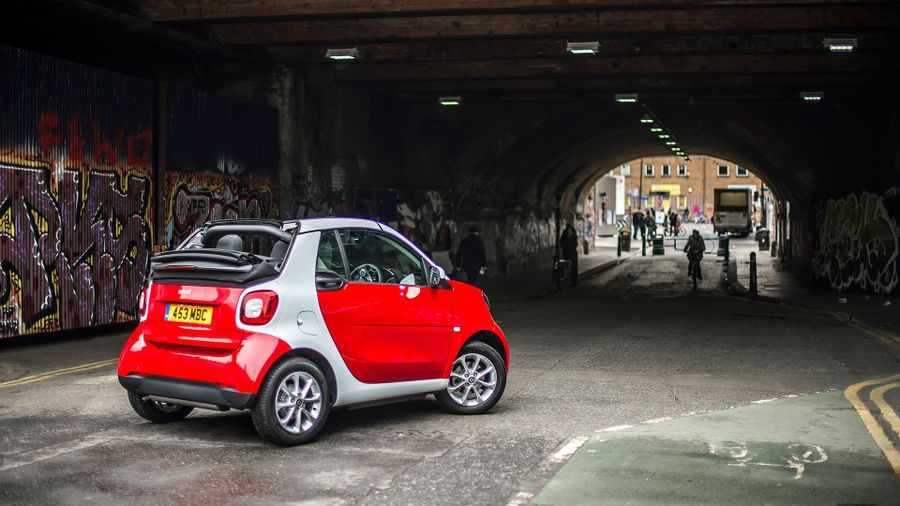 The ForTwo Cabrio retains pretty much all of the regular ForTwo’s distinctive design. Smart-ophiles will spot some minor differences, such as the narrower rear pillar and sportier styling of the safety cell, but the big difference is that the basic car’s hard top is replaced by a fabric roof. It’s available in black or (as a cost option) red. And, given the vagaries of the British weather, the good news is that it can be raised or lowered in just 12 seconds, even when the car is moving. What’s more, the roof can be set up in three different ways. You start with the fabric in place, and at the touch of a button you can roll back what is effectively a full-length sunroof. Then, to open up the cabin even further, you can drop the side windows and remove the roof bars. Being a Smart, the Fortwo is already – if you’ll forgive the pun – a smart-looking thing, with alloys and LED daytime running lights on every model. Mind you, the standard spec on a Smart is pretty much irrelevant because – as the umpteen pages of colours, trims and accessories in the brochure testify – the point is that the almost limitless combinations allow buyers to create what is effectively a unique car. And, that's the case on every model, even the most expensive Brabus model, which comes with its own sporty bodykit, chrome exhausts and unique alloys.

Essentially, the Cabrio’s cabin is identical to the hard-top’s, with the same high-quality materials that inject some fun and frivolity. However, while the fabric roof doesn’t alter the car substantially, it does make it a slightly different proposition as a city car. By virtue of being open to the air and being able to look up at buildings through the gap where the roof would be, it somehow gives you a more intimate connection with the city as you drive through it. True, even with the cabin in its most open configuration, you’re still conscious of the bodywork behind your head, so you never feel completely open to the elements, but there’s no question you’re getting a genuine wind-in-the-hair experience. Mind you, there is a price to pay: dropping the roof makes it much more difficult to see out of the car – particularly over your shoulder and through the rear-view mirror. It’s also a little disappointing to see that you have to head to the options list to get height adjustment on the steering wheel and driver’s seat. 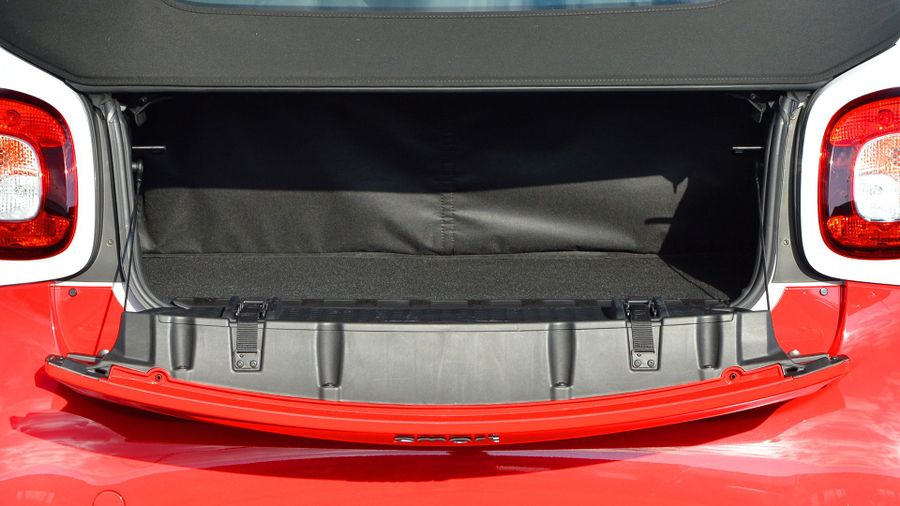 View gallery
“ With the roof bars stowed in the boot lid, they eat into the already limited boot space ”

This may be a tiny car, but the two people it can accommodate will be anything but cramped. Legroom is excellent, as is headroom – even with that retractable roof in place – and a couple of six-footers will be perfectly comfortable. Indeed, the only drawback is that, with the roof bars stowed in the neat compartment inside the boot lid, they eat into the already limited boot space. Then, again, if you were worried about practicality, you probably wouldn’t be considering a ForTwo of any sort in the first place. If you’re considering the Electric Drive version, then fear not; the batteries are stored in the floor of the car so there’s no price to pay in practicality. 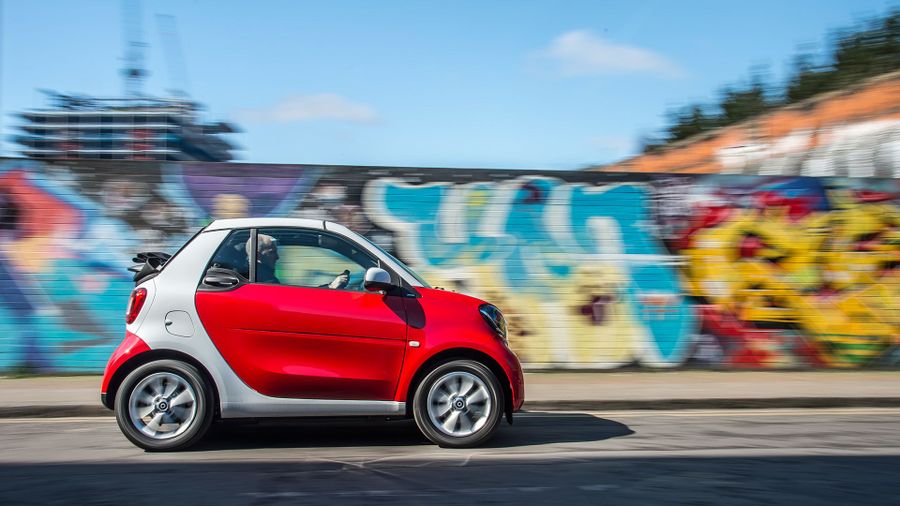 Naturally, what makes the ForTwo such a fine car around the city is its tiny size. Not only can it fit into amazingly tight gaps, the turning circle is almost comically small and you have to fight the temptation to perform impromptu U-turns just for the hell of it. That said, it’s not a universal thumbs-up, with the biggest problem being the unsettled ride. The suspension doesn’t deal with bumps in the road particularly effectively, which can give you a proper jolt from time to time, and the effect is also exacerbated because the rear wheels hit the same bumps so soon after the fronts. It’s noticeable on the most basic models, but it’s even more unpleasant on Proxy models, which come with larger alloy wheels and lowered sports suspension; and, in the sporty Brabus model, it can be genuinely uncomfortable, with the back of your head being bashed against the head restraint from time to time. Out of town, the Cabrio feels quite agile and nimble, but it’s clearly not in its natural (or intended) habitat, and that jittery, unsettled feeling never goes away.

Like the regular ForTwo, mainstream versions of the Cabrio come with a choice of two petrol engines, but our only experience of these so far has been with the most powerful version - the turbocharged 89bhp engine - and we’ve only sampled it with the optional six-speed automatic gearbox. Happily, it’s a combination that really suits the car. It responds well around town, dashing eagerly from one red light to the next, but it also has the wherewithal to cope with higher-speed blasts out of town. Mind you, if you are considering regular high-speed journeys in a Smart, bear in mind that, even with the roof in place, they’ll be very noisy experiences.

If speed is your thing, then you could consider the Brabus version, with its 109PS engine. It's easily the quickest model in the range, but the trouble is that it's still not all that quick, and especially not once you drop the roof and ruin the aerodynamics. Yes, it does respond sharply in town, but given the price you pay financially and in terms of ride comfort, we don't think it's worth it.

We’ve also had a shot in the Electric Drive version, which has a 80bhp electric motor and a theoretical maximum range of around 100 miles. Electric propulsion really suits the Smart’s urban-friendly character because the pickup is instantaneous and eager, allowing you to exploit gaps in traffic really effectively. The top speed is limited to 80mph to maximise battery range, but that’s unlikely to ever cause you a problem. 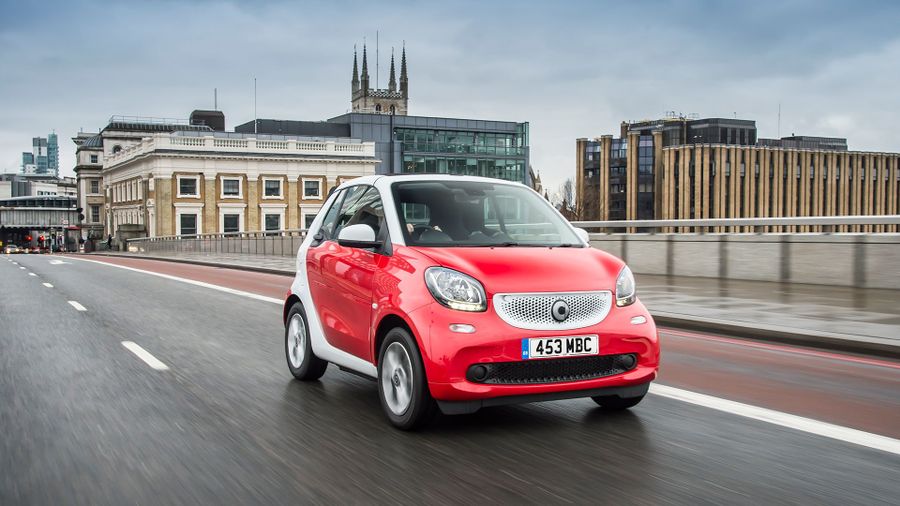 View gallery
“ If you can stomach the purchase price, the running costs don’t look too bad ”

The Cabrio is like the regular ForTwo, in that it’s an expensive thing to buy; even more so, in fact, as the open-top car is a couple of grand dearer than the Coupe. City cars like the Toyota Aygo (with its x-wave roof) do provide some sort of open-top motoring (and two more seats) for a lot less. Or, looked at another way, you don’t have to add all that many options on to the range-topping Smart to be close to Mazda MX-5 money. However, if you can stomach the purchase price, the ForTwo’s running costs don’t look too bad: every model averages more than 60mpg and only the Brabus version has CO2 emissions of more than 100g/km. Obviously, the Electric Drive version is even cheaper to run, because electricity is much cheaper than petrol, and it qualifies you for all sorts of tax breaks and other fiscal benefits. The Government will even give you a few grand towards buying it in the shape of the electric car grant, but even after you factor that in, the car is still eye-wateringly expensive.

As a maker, Smart doesn’t have the best of records, sitting mid-table in Warranty Direct’s Reliability Index. However, previous generations of the ForTwo have a much better score, with a better-than-average rating for reliability. This is borne out by owner reviews on our website, where previous versions of the car score almost universally full marks for reliability. So, while it’s too early to comment with any certainty on this model (which was co-developed with Renault), the omens are good.

The Smart ForTwo has always been big on safety – to such a degree that the company has made a design feature of the tridion safety cell by painting it a separate colour – and this version continues in that vein, with the standard kit including five airbags (a driver’s kneebag, plus driver and passenger head and thorax bags), anti-lock brakes, stability control and cross-wind assist. Optional extras also include lane-keeping assist – which beeps at you if the car detects you drifting out of your lane – and forward collision warning sensors.

There are three trim levels, Passion, Prime and Proxy, and all are reasonably well equipped. Even the basic Passion comes with climate control and Bluetooth connectivity (although it’s perhaps a surprise that a DAB radio is only an option), while Prime adds leather upholstery, heated seats and extra instrument pods. Meanwhile, at the top of the range, Proxy models have the Sports package (including a bespoke bodykit, as well as changes to the suspension), but the options list across the range is long and tempting – particularly when it comes to the car’s styling – and allows buyers to create a unique package. The Electric Drive model is based on Prime trim, but also adds heated leather seats, rear parking sensors and satellite-navigation. Finally, there's the Brabus version, which comes with its own sporty look inside and out, as well as plenty of luxury items and technology to justify the high price.

Any ForTwo is at its best as a city car, and there’s no doubt that the retractable roof gives it an extra dimension in that role. What’s more, while similar cars do give some open-top thrills, none do it as well as the Smart. On the other hand, there are some obvious shortcomings, so we recommend that potential buyers should only take the plunge when they are fully aware of those limitations. 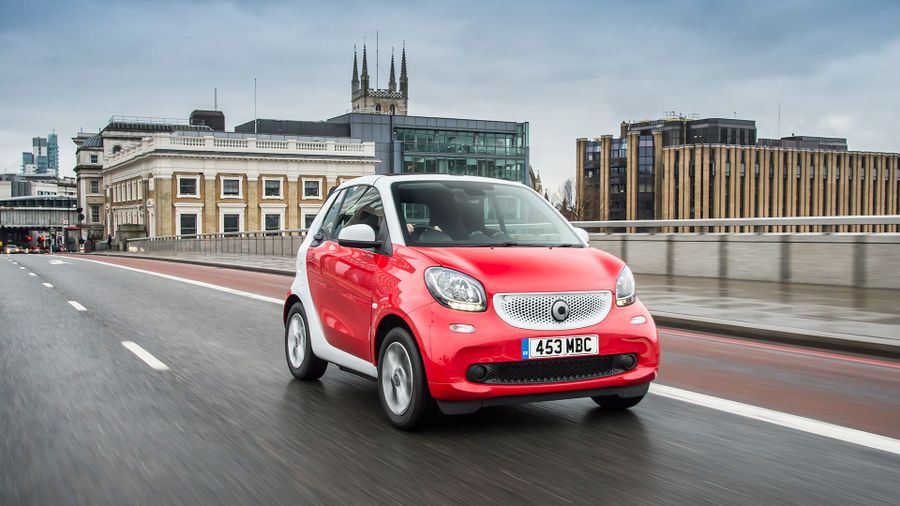