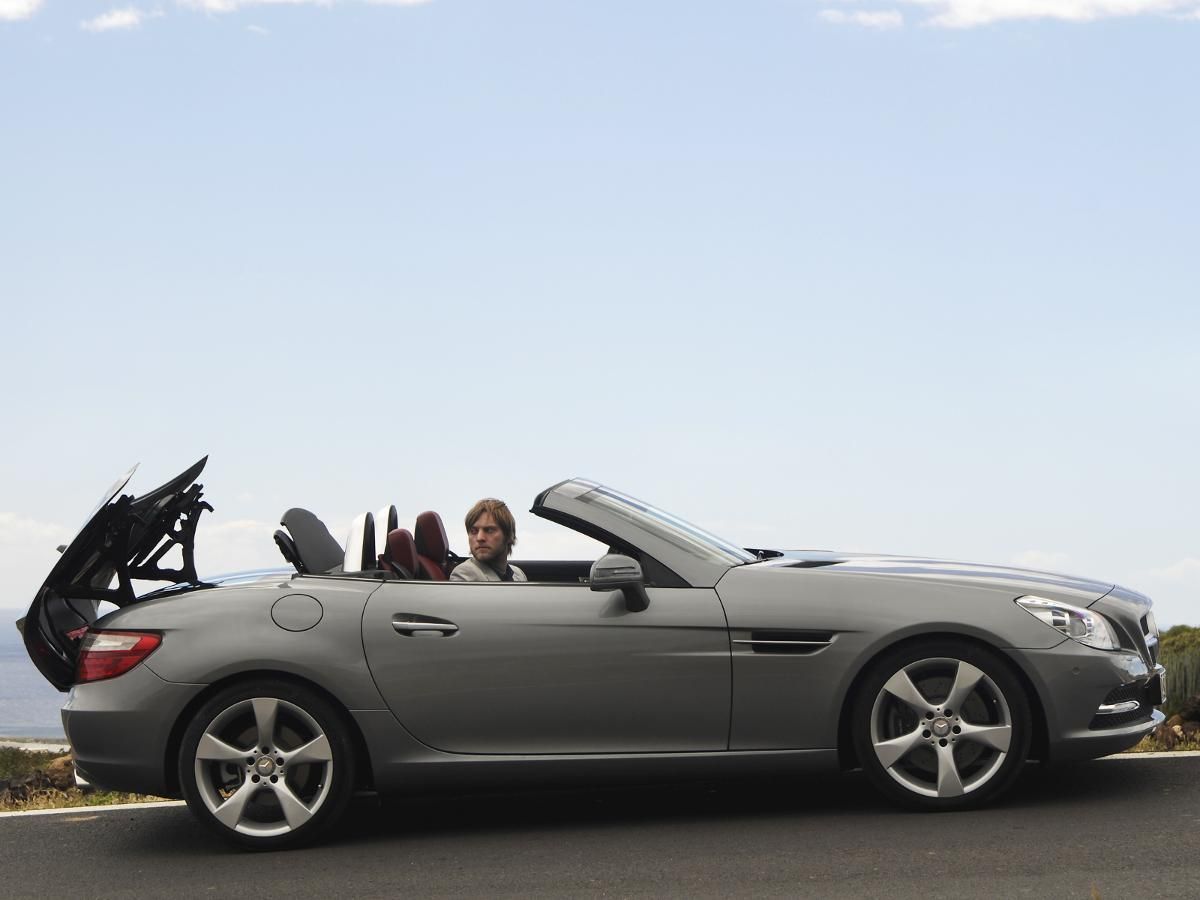 The third generation Mercedes-Benz SLK Roadster is the sportiest and most engaging version yet. All those inherent SLK values of refinement and luxury are there, but its nowhere near as good to drive as the best cars in this class. It is also quite expensive - and the harsh ride, creaky roof, and dated infotainment system all count against it.

The current trend for strong geometric lines has made this the most slab-sided and aggressive looking Mercedes-Benz SLK so far. Traditionally, the Mercedes-Benz SLK has appealed more to female buyers, so the emphasis with the third generation Mercedes-Benz SLK was to broaden appeal by ‘manning-up’ the visual stance. Special merit must go to the boot area, which requires some slick double-hinged engineering to house the three-piece folding metal roof. The combination of a long, wide bonnet and squat, stubby rear design gives it classic sports car proportions, and the shutlines are clean and smart. Entry-level cars get five-spoke 17-inch alloys, while the sportier AMG versions boast twin exhausts, lowered suspension and a stylish bodykit, along with larger alloy wheels.

The interior of the Mercedes-Benz SLK is smart and functional, without setting the world alight when it comes to design or quality. It feels reminiscent of the Mercedes-Benz SLS supercar, and there are brushed aluminium accents on the door handles, jet-like air vents and gear selectors. At the centre of the dash is a large 5.8-inch screen that also has the option of offering internet access through a data enabled mobile phone. Further party pieces include Campari red lighting strips along both the door cards and centre console to lift the cabin’s ambience at night. In the day, customers can play with the Magic Sky Control roof. This allows passengers to alter the amount of light that enters the cabin by changing the transparency of the glass roof. Sounds like an expensive, optional extra (it is) but in hot weather it does keep you cool with the roof up. The overall finish of the Mercedes-Benz SLK feels decent but it falls just short of the BMW Z4 by a couple of instances – the minuscule clock that sits on the dash feels tacked on, while the elasticated door pockets also look cheap. A Porsche Boxster and Audi TT Roadster both feel considerably more premium inside, with smaller panel gaps and more space.

Space and versatility isn’t a Mercedes-Benz SLK strong point, but there is some storage on offer in the central arm rest and behind the seats, as well as noticeably more shoulder room. The latest mechanism in this third generation SLK now uses a lighter weight magnesium frame, takes less than than 20 seconds to electrically unfurl and can be operated when moving (albeit at very low speeds). Unfortunately, the retractable show piece still eats into bootspace rather dramatically, and is convincingly bettered by the two-boot layout of the Porsche Boxster. When folded, the main issue isn’t so much space but the tight boot aperture, as even conventional shopping bags require a decent push to fit. Roof down, the SLK continues to provide both passengers with Airscarf (the best-selling option that blows hot air onto the occupant’s neck) and Airguide, a new wind deflector that sits in between the two rollover bars and reduces buffeting at speed.

The rear-wheel drive chassis is a development of the outgoing Mercedes-Benz SLK. However, the steering rack has been adjusted to offer a more darty and direct response for the driver. Combined with impressive body control, the new SLK feels sportier than ever before but doesn't handle with the same sure-footed poise as any of its nearest rivals or match the comfort of the BMW Z4. The AMG Sport models have a firmer suspension setup, but even the standard car is not very comfortable on uneven British roads/ Optional variable rate steering and new adjustable dampers are available as part of a Dynamic Handling Package, but even with these expensive extras, the SLK is not able to compete with the front-runners in this class. Choose a set of the larger alloy wheels and the road noise is fairly shocking too, especially on coarse road surfaces.

Five versions of the new Mercedes-Benz SLK are currently available. The best-selling SLK 200 develops 184bhp from a turbocharged, 1.8-litre petrol engine. It feels a bit wheezy and breathless at higher speeds. The higher tuned SLK 250 packs 204bhp from the same four-cylinder unit and accelerates from 0-60mph in 6.6secs, but it's also thrashy and not especially eager, either. The SLK 350 uses Merc’s new normally aspirated 3.5-litre V6 with 306bhp. The 0-60mph sprint time shrinks to 5.6secs and it feels considerably punchier. The diesel model develops a not insignificant 204bhp from a twin-turbocharged 2.1-litre engine. While it’s likely to appeal to those looking to keep costs down, we can’t help thinking that a diesel soundtrack is a tad out of place in an elegant, sporty roadster. In Mercedes tradition, the SLK55 AMG is the current range topper, and uses a new 421bhp normally aspirated version of AMG’s new 5.5-litre V8. Only the SLK 200 gets a six-speed manual gearbox as standard, but it can also be specified with the same 7G-Tronic seven-speed auto that features as standard on the rest of the range. Both gearboxes confirm the SLK as a nippy cruiser rather than an out-and-out sports car. The manual gearbox feels notchy and a bit vague, while the auto ‘box is luxuriously smooth but a little bit slow-witted compared to the double-clutch system used in the Audi TT Roadster. This SLK may be quick, but this is not a car you hustle along for fun.

The Mercedes-Benz SLK 250 BlueEfficiency is not good value when compared to its closest rivals, especially the Audi TT Roadster, which is better equipped as standard and cheaper. All versions come with engine stop/start, and brake energy recuperation to help save fuel. The SLK 200 automatic and SLK 250 return 43.5mpg and 42.8mpg, respectively. However, the top spec 301bhp SLK 350 returns a still fairly impressive 39.8mpg and 167g/km of CO2. Unsurprisingly it is the diesel that offers the best economy, managing 56.5mpg and emitting 132g/km. Again though, a diesel TT will be even cheaper to run, with 65.7mpg claimed and CO2 emissions of just 114g/km.

Mercedes-Benz is known for its robust build quality and long-lasting designs. However, the third generation SLK is a development of the previous model which, after a limited recall for incorrect control unit software, has fared well in later life. The engines are all proven in other Mercedes models including the C- and E-Class, but the manufacturer does not enjoy a brilliant reputation in the latest round of customer satisfaction surveys.

Mercedes’ devotion to self-improvement is probably evidenced best with the vast array of safety equipment on offer in the SLK. Standard features include PreSafe and Active Bonnet, both designed to improve passenger and pedestrian safety respectively, in the event of an impact. There’s also AttentionAssist, a system that constantly monitors 70 parameters to ensure driver alertness, and Brake Assist Plus with optional Distronic Plus, a form of radar cruise control. We also tested (and liked) the Intelligent Light System, which managed the main beam in low light conditions, and Speed Limit Assist. The new Mercedes-Benz SLK is still to be Euro NCAP tested, and is unlikely to be, as it sells in low enough numbers to avoid the attention of the testing body.

Standard specification includes 17-inch five-spoke alloys, 5.8-inch colour screen, LED daytime running headlamps, Bluetooth connectivity, climate control, six-disc CD player and the standard electric-hydraulic Vario roof without glass. The Mercedes-Benz SLK AMG Sport adds leather upholstery for the seats, racy red seat belts, drilled front brakes and other performance and styling enhancements. The extensive options list can add a lot of money to the overall price at a dealer though, so be careful not to get carried away.

If you want a two-seater sports car that puts more emphasis on luxury and gadgets than ultimate driving performance, the Mercedes-Benz SLK is it. However it would be remiss of us not to highlight its multiple dynamic shortcomings, or its high list price when compared with its rivals, especially the Audi TT Roadster and Porsche Boxster. 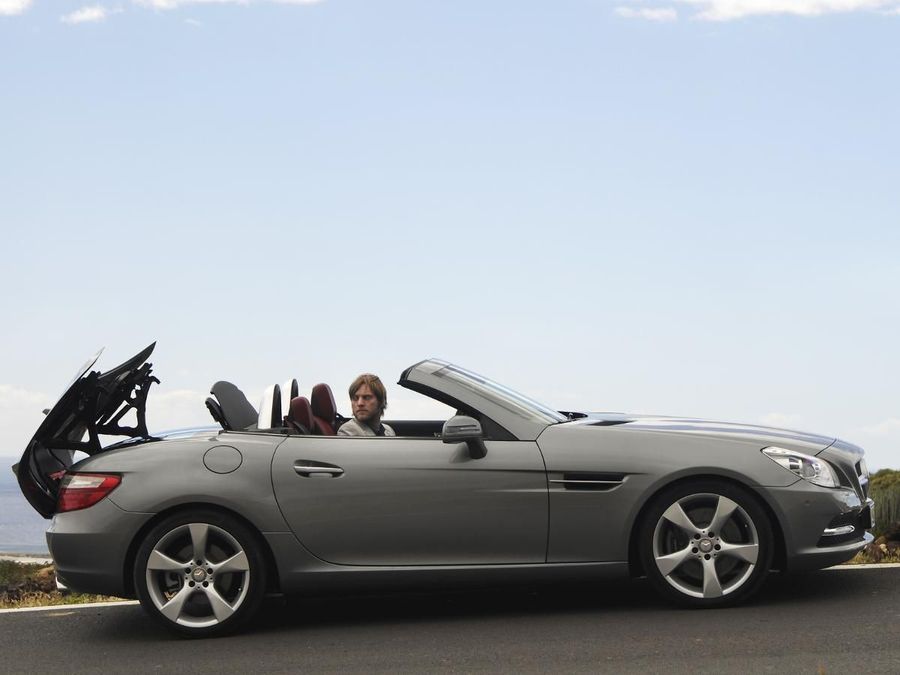