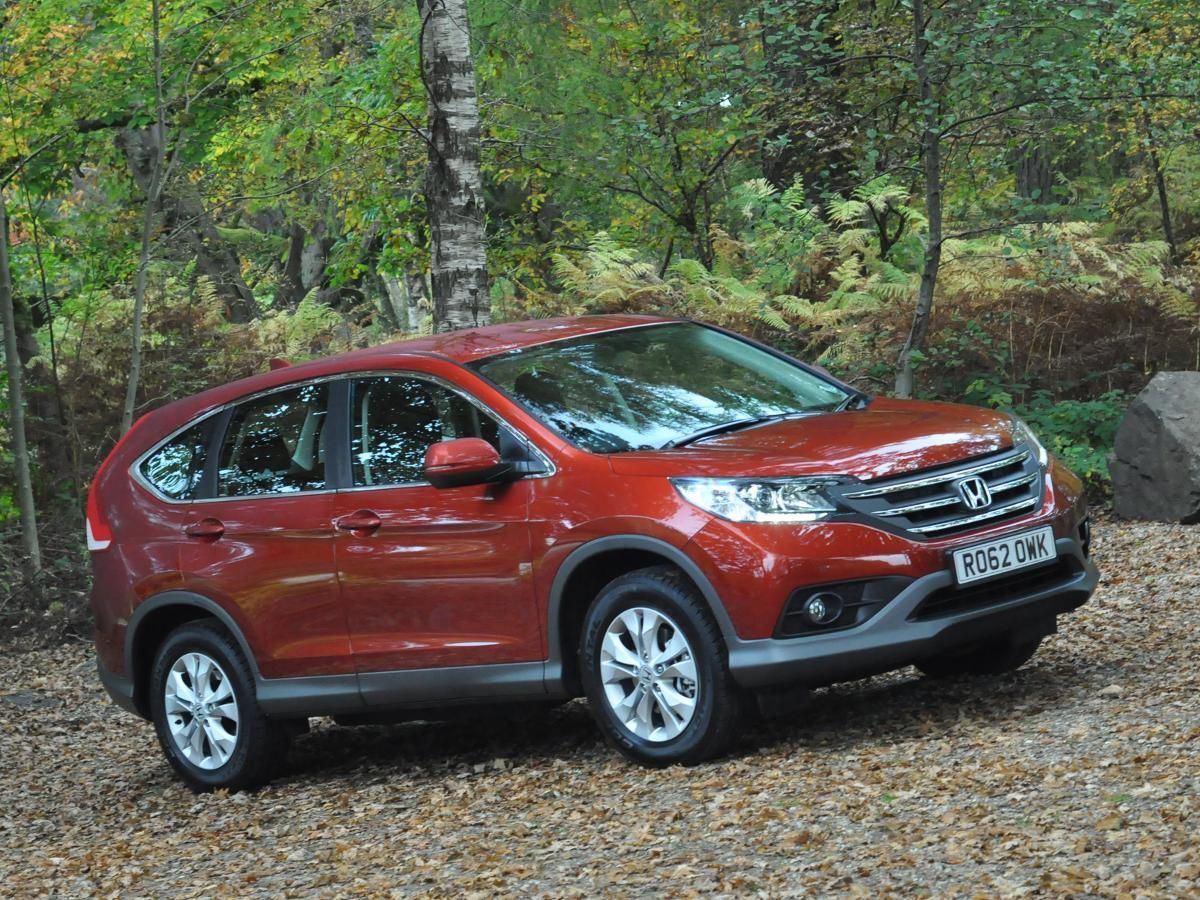 The Honda CR-V is one of the best five-seat 4x4s. Its cabin is spacious and practical and the 1.6-litre diesel engine combines respectable performance with low fuel bills.

Best on a budget
CR-V 2.0 S
The front-wheel drive petrol is a good buy if value is a priority.
Best seller
CR-V 1.6 i-DTEC SR
This is expected to be the best-seller. Honda says its customers are happy to pay the extra for a higher-spec model.
Blow the budget
CR-V 2.2 i-DTEC EX auto
This will put the biggest dent in your savings.

The fourth-generation Honda CR-V is a much more assertive-looking car than its predecessor. Whereas the old model was inoffensive to the point of blandness, the new model has a more prominent grille and deep-set headlights which inject some personality, especially at the front. The strong shoulder line and pronounced wheelarches make the car look more athletic than the old model when viewed from the side.

While the CR-V may not match an Audi Q3 for showroom appeal, the cabin feels well screwed together, with a welcome solidity to everything you see and touch. You’ll find soft-touch plastics on the upper dash and, although the plastics on the lower dashboard and doors feel less upmarket, they’re certainly not shabby. The instruments are dominated by the unusually large speedometer. It’s easy to read at a glance without detracting from the clarity of the other dials. The driving position is sound and there’s more adjustment for the steering wheel and driver’s seat than before. But, we were a little disappointed with the sat-nav, which is functional, but has dated graphics and no 3D driving view.

This is where the Honda really scores over its rivals. The driver and front seat passenger have plenty of room, but it’s the rear of the cabin which impresses most. Adults have plenty of head and legroom, even with the front seats slid right back. There’s no transmission tunnel to speak of, so there’s enough space for everyone’s feet when carrying three passengers in the back. What’s more, there are air vents for those in the rear of the car, something that’s missing from some rivals. The 589-litre boot is larger than many estate cars’, and can be extended to 1,669 litres by folding the back seats down. Pull levers on either side of the luggage space and the rear seats stow away in one quick and easy operation.

The CR-V is a neat and tidy car to drive. Firm suspension delivers good stability on A-roads and motorways without being harsh at slower speeds. It’s not as cosseting as a Land Rover Freelander, but it’s far from uncomfortable. The steering feels a tad lifeless either side of straight ahead, but turn the wheel further and the response sharpens. There’s plenty of grip and little body roll. It’s not an exciting car to drive, but it is very capable. All versions are four-wheel drive, except for the 1.6-litre diesel-engined models and petrol S and SE trims, which are available with two-wheel drive.

There’s a choice of petrol or diesel power, but we expect the 1.6-litre diesel engine will the most popular choice, thanks to its low emissions. Although it’s the least powerful engine in the range, it has more than enough performance for everyday use, especially as it’s two-wheel drive only and lighter than the 2.2-litre model. At least the larger-engined model is appreciably quicker, with Honda claiming a 0-62mph time of 9.7 seconds, and its 258lb/ft of torque giving it plenty of punch for overtaking. It’s a quiet engine, too, which helps make the CR-V a relaxing car for long drives. Buyers have the choice of a six-speed manual or a five-speed auto. The auto changes gear cleanly, but isn’t as decisive as the best automatics, so we prefer the manual. The 2.0-litre petrol needs to be worked much harder than the diesel, but performs well enough to be worth considering.

The CR-V should prove inexpensive to run, especially if you choose the 1.6-litre diesel engine. This averages more than 60mpg and emits less than 120g/km of CO2, making it particularly attractive to company car drivers and matching the most frugal SUVs. Even the larger diesel engine (with a manual gearbox) returns a creditable 50.4mpg and emits 149g/km of CO2 in S and SE trim, or 48.7mpg and 154g/km if you choose a higher spec SR or EX.  Choose the auto and economy worsens to 42.8mpg and emissions increase to 174g/km, or 41.5mpg and 180g/km on the more expensive versions. The front-wheel drive petrol model returns 39.2mpg and emits 168g/km, which is 5g/km less than the four-wheel-drive petrol. Honda resale values are usually a cut above most mainstream rivals although don’t expect the CR-V to hold its value as well as an Audi Q5 or BMW X3.

You should have no worries on this score. The old CR-V – and Hondas in general – usually perform very well in reliability and customer satisfaction surveys. The engines are developments of the existing units and are well proven. So confident is Honda, its buzz-words for the CR-V are: “reliable, capable and reassuring.”

Every car comes with Vehicle Stability Assist and front, side and curtain airbags for both front and rear-seat passengers, all of which helped the car to a full five-star rating in Euro NCAP crash tests. Top-spec EX cars are available with high-tech options like Honda’s Collision Mitigation Braking System, which slows the car automatically at low speeds if sensors detect the car is about to drive into the car in front.

There are four specification levels, rising from the basic S through SE, and SR to the top-spec EX. All cars have climate control and cruise control, SE models add parking sensors, rain-sensing wipers and a rear-view camera. SR versions gain height adjustment for the front passenger seat, roof rails and a DAB radio. EX models have a panoramic glass roof, a powered tailgate and leather upholstery among other goodies.

The CR-V is a thoroughly sensible and practical 4×4. It may be a little pricey but otherwise it’s hard to find any serious flaws. 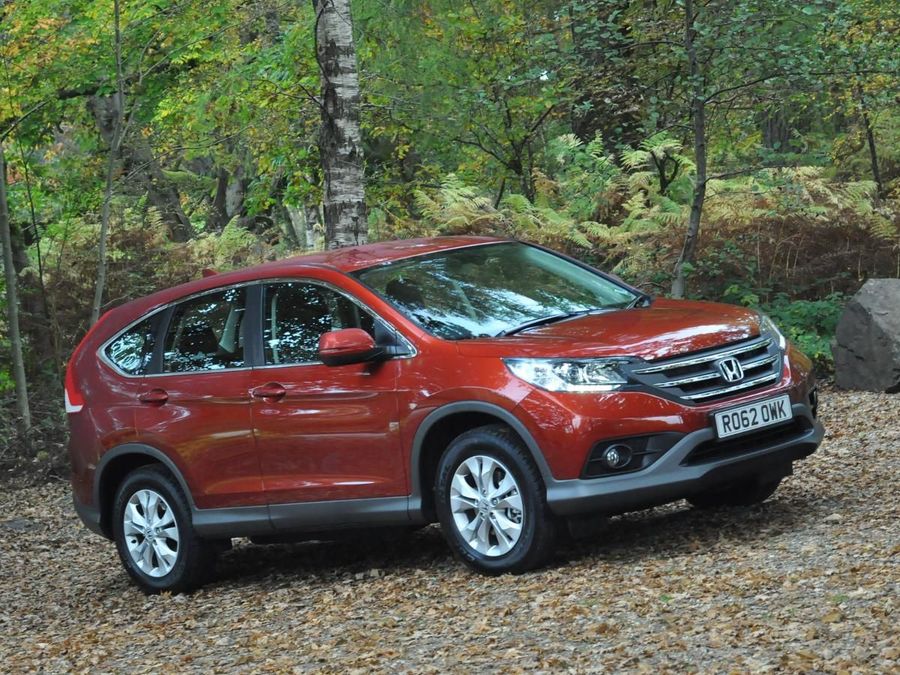