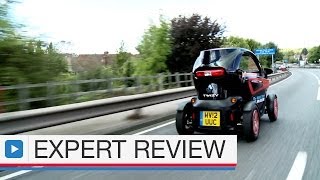 The Renault Twizy is fun in the right circumstances, and pretty much unique. It makes a great zero-emissions city runabout and it costs pennies to run, but it has some major limitations and will only suit a very small number of people.
Our verdict

Is the Renault Twizy a good car?

Running costsSafetyFeaturesReliabilityInteriorPerformance
The Twizy is one of the cheapest electric cars you can buy, and costs less than half as much as Renault’s own Zoe. The reason for this is largely because the Twizy technically isn’t even a car – it’s a quadricycle, or four-wheeled motorbike.

Apart from the low outlay up-front, running costs are almost negligible: there’s no road tax to pay, it’s exempt from the London Congestion Charge and electricity costs will be very small, with the cost of a full charge little more than a pound.

You will have to budget for a one-hour service each year, however, and insurance costs – although low – are a little higher than those of the most basic superminis, including cheaper versions of the Renault Clio .

With 15 used Renault Twizy cars available on Auto Trader, we have the largest range of cars for sale across the UK.

There are no results. Search all brand new deals