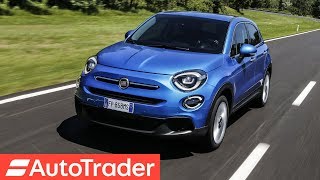 The 500X takes the retro styling of Fiat's popular 500 hatchback and transfers it to a compact SUV format. Customers for this type of car have lots of choice, including cars that are objectively better, but if you're sold on the looks and prepared to overlook its flaws, the 500X has much to like about it.
Our verdict

Running costsSafetyFeaturesReliabilityInteriorPerformance
Prices for the 500X are average for the class, being more or less on a par with the Nissan Juke and Renault Captur but lower than those of the Ford Puma and Volkswagen T-Roc.

However, the 500X doesn’t have particularly great predicted resale values compared with these rivals, which over the course of several years of ownership could mean higher overall costs.

The cost of service, maintenance and repair is also likely to be higher, while . comparing fuel economy figures for the 1.0-litre engine in the 500X with rival equivalents doesn’t reflect well on the Fiat either. Overall, the 500X won’t cost too much to own but it doesn’t make as much financial sense as its key rivals.

With 410 new and 733 used Fiat 500X cars available on Auto Trader, we have the largest range of cars for sale across the UK.