View gallery
The very nature of having such a wide range available makes knowing what you should go for actually tougher rather than easier.

So, taking the hugely popular adventure bike category as an example, at one extreme £7500 will buy a virtually brand new, novice-orientated BMW F750GS or, at the other, an eight-year old, fully-loaded BMW R1200GS Adventure with 40,000 miles on the clock. So which, taking, everything into consideration, performance, equipment, condition etc, is best? The reality is usually somewhere in the middle, ie a three or four-year-old quality, litre-class machine in good condition and under 20,000miles.

With that that in mind we taken a good, long look at what’s available for this budget across a range of the five most popular categories – retros, all-rounders, nakeds, the aforementioned adventure bikes and sports machines. We’ve looked at their performance and abilities, reliability records, quality and used values and come up with our recommendations. In some categories we were spoilt for choice, so have made mention of a number of brilliant bikes with which you won’t go wrong. All of them, however, are great bikes in their own right with proven records and which are also fantastic value as used buys.
1. BMW RnineT – the classy retro
There are plenty of retro bikes available for under £7500 including a whole range of Triumphs, Ducati’s Scrambler family and Royal Enfield’s new and hugely popular 650 Continental/Interceptor. Most, however, are built down to a price, fairly underwhelming performers and primarily aimed at novices. But if you want something that’s a step up in terms of performance, specification and class there’s still a decent choice. Triumph’s top-of-the-range, 1200cc, 96bhp Thruxton café racer is classy, entertaining and a significant performance step up from its Bonnevilles, yet a low-mileage 16-plate can easily be had for under £7500. Honda’s sublime, substantial but slightly soft CB1100 four can be had on an 18-plate with barely 4K miles, too. But for our money, BMW’s classy and brilliant RnineT remains the best of the bunch. Launched 2014 based on R1200R, 110bhp mechanicals it beautifully combines retro style with modern dynamics, is fun yet versatile, classy but durable and £7.5K will now easily buy you a 14-plate 9K-miler. And, if you want something newer, the more basic RnineT Pure (with steel not alloy tank and more basic suspension and clocks) offers just as must style but can be had on a 17-plate example with 5K miles for the same money.

Find a BMW RnineT here.
2. Honda VFR800X Crossrunner – the overlooked allrounder
The Crossrunner may be one of the most overlooked Honda motorcycles of recent years but that ignores the fact that it’s also a brilliant allrounder and by being so overlooked also makes it a brilliant value used buy. First introduced as a more upright, semi-adventure-styled VFR800 in 2011 its versatility and brilliantly flexible V4 powerplant were praised but its slightly odd looks hit sales. The second generation version from 2015 improved its looks and cemented its reputation for usability and all-round class – but it hasn’t caught on caught on. That’s partly due to rivals like Yamaha’s newer 900 Tracer grabbing the headlines and partly due to it lacking trendy modern features like a TFT dash and loads of electronics. Forget all that, however, and the Crossrunner is excellent: neutral easy handling, typically brilliant Honda ergonomics, quality build and proven reliability and durability and, best of all, that unique, characterful and flexible V4 powerplant. And, with used prices suffering, you can easily get a sub-10K-mile, 17-plate example for your £7500. View gallery
3. Triumph Speed Triple 1050 R ‘94’ – the definitive super naked
Litre-class ‘super nakeds’ is another category where, with a £7500 budget, prospective buyers are spoilt for choice. What’s your poison? A multi-cylinder, 160bhp weapon? £7500 will get you a decent, 15-plate BMW S1000R. Fancy an exotic Italian? A low-mileage, 16-plate Ducati Monster 1200 can be yours. But, for our money, a better compromise and the best of the bunch is Triumph’s still class-defining triple, the Speed Triple 1050. The familiar ‘foxeye’ version was introduced in 2012 and received its latest refresh in 2018 including a power boost to 148bhp and new electronics. £7500, however, will buy you an almost-as-good, ‘mid-generation’ 138bhp model in desirable ‘R’ trim complete with Ohlins suspension front and rear to go with its quality Brembo brakes, brilliant handling, grunty triple performance and all-round classy charisma. What’s more there’s plenty available, a large and devoted online community, loads of customizing options and your budget may even grab you a limited edition, 20th anniversary ‘94’ example! 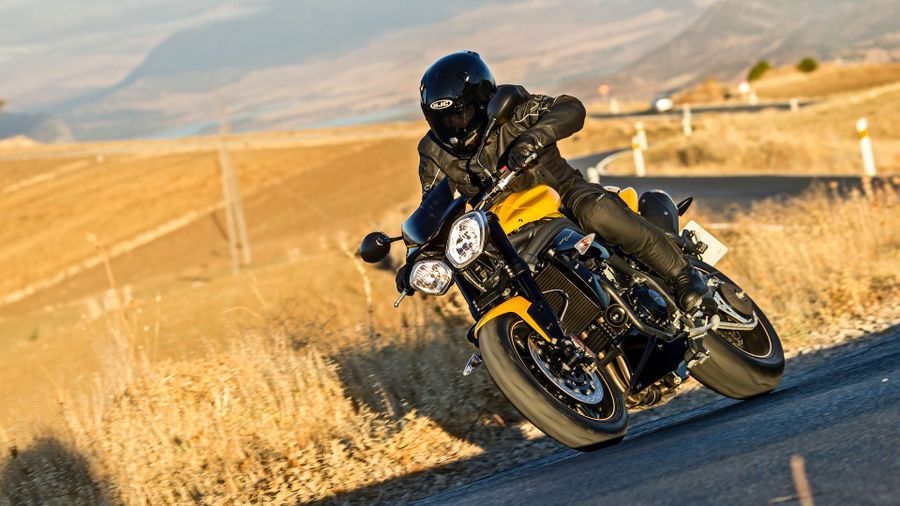 View gallery
4. KTM 1190 Adventure – the supreme adventure bike
When you think about top drawer, fully-loaded adventures bikes you’d be forgiven for assuming most are out of reach at this price – and you’d have a point. After all, a brand new, fully-kitted BMW R1250GSA is currently upwards of £18,000, a top spec Triumph Tiger 1200 starts at £15K and Ducati’s latest Multistrada 1260 Grand Tour starts at just shy of 19 big ones. But it’s not all bad news: if you think a little smaller, a perfectly decent BMW F800GS Adventure comes into this budget, as do 17-plate, 20,000-mile versions of Honda’s excellent CRF1000 Africa Twin. Our pick of the bunch though is another bike that’s cruelly overlooked and now been superceded. KTM’s 1190 Adventure came out in 2013, boasted a Multistrada-rivalling 150bhp, bristled with advanced electronics and quality components and also came in a more dirt-orientated R version with larger wire wheels and longer travel suspension. Both are brilliant bikes both on and off-road and, best of all, poor residuals compounded by both being replaced in 2017 means good examples can be had for a snip. £7500 will buy you a good, 14-plate ‘R’ still with under 20K on the clocks and, performance and ability-wise, it’s a match for any current offering. View gallery
5. Suzuki GSX-R750 – the purists’ sports choice
As with adventure bikes, full-bore, high-end sports machines is another category where, usually, money talks. After all, Ducati’s latest V4 Panigale starts at only just under £20K with most of its Japanese rivals not being that much cheaper. But there is an alternative – and a very affordable one at that. For years we’ve been used to sports bikes being either 600 or 1000cc but until very recently Suzuki offered a middle ground, the GSX-R750 which, for many purists, was an ideal blend of nimble handling and real world performance. The latest version was last officially offered for sale in the UK in 2016 (due to tightening EU regs) and combines a healthy 148bhp with more than enough handling and braking performance to satisfy anyone – at least on the road. Best of all, late, used but immaculate versions from 2015 or 16 with as little as 3000 miles on the clocks can now be had for under £7500 and if you’re lucky you might even find one in classy 30th anniversary or MotoGP replica livery. A brilliant all-round sports bike for bargain money? If that isn’t having your cake and eating it we don’t know what is!