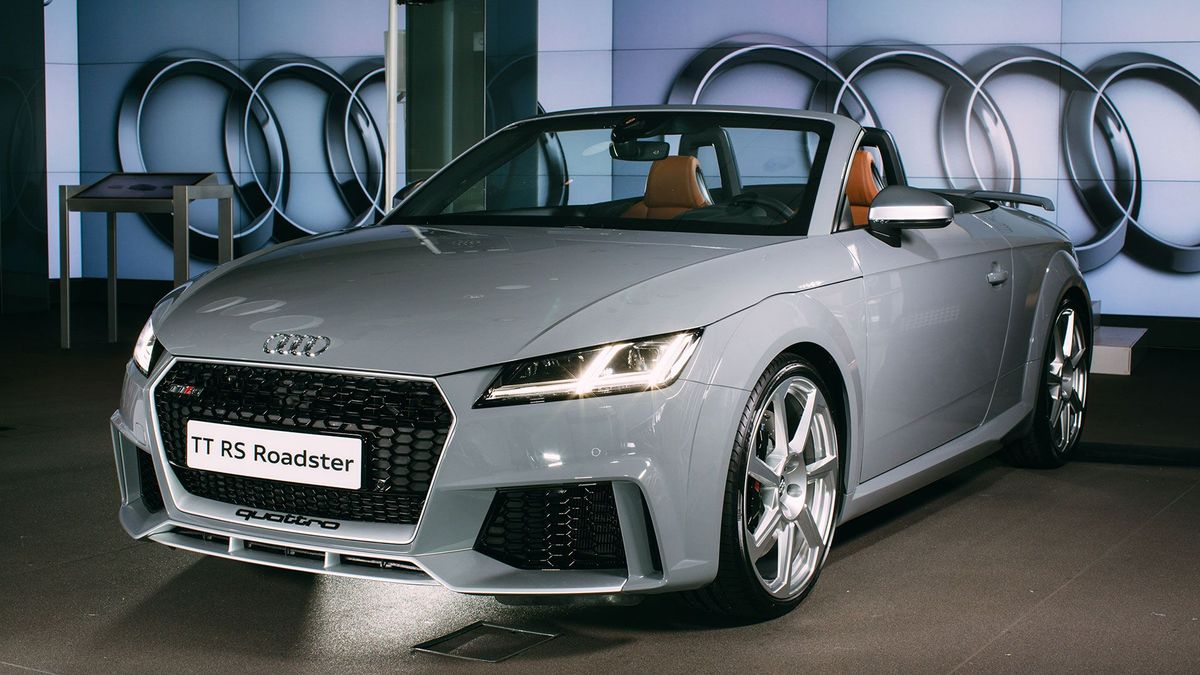 First published: 25th April 2016
Share on Facebook on Twitter
Audi has simultaneously revealed its new TT RS Coupe and Roadster - its fastest ever five-cylinder production model - with the hardtop unveiled at the Beijing Motor Show, and the Roadster at a special event at the Audi City showroom in London.

While rival sports cars like the Porsche 718 Cayman and 718 Boxster have downsized their engines, the TT RS features a new, lighter version of the familiar 2.5-litre five-cylinder turbo engine, with the power and torque increased to 395bhp and 354lb ft.

That impressive power output is sent to all four wheels via a seven-speed S tronic dual-clutch gearbox and Haldex all-wheel drive system - the only transmission option currently available. It also translates into some scarcely believable performance figures, with the TT RS coupe completing the benchmark 0-62mph sprint in 3.7 seconds, the heavier Roadster is 0.2 seconds slower, but still quicker than any version of the Porsche Boxster.

So if you hook up the launch off the line, this former hairdresser's car will be almost half a second faster away from the lights than a Mercedes C63 S AMG coupe or a Porsche 911 Carrera S, and just 0.1 seconds slower than the new Audi R8 Spyder - which has double the cylinders, and made its UK debut alongside the TT RS after first appearing at the New York Auto Show. 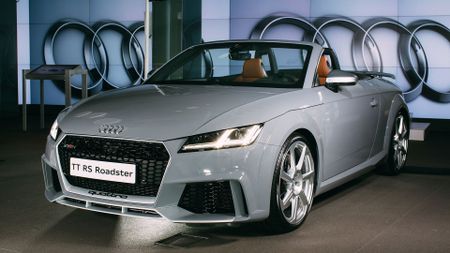 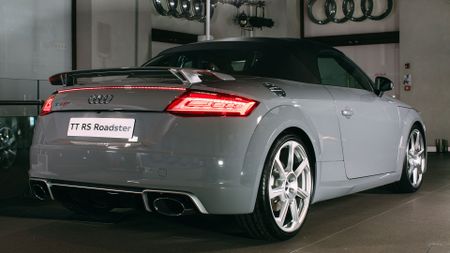 View gallery
Other technical highlights include variable ratio steering that has been tuned specifically for greater response in the RS model, lowered suspension which sits 10mm closer to the floor than the standard TT, although a set of adjustable magnetic dampers are available as an option, as is a bespoke RS exhaust system to maximise the rorty sound of the engine.

To cope with the ferocious performance, the brakes have been uprated, with the standard front discs now 370mm across with eight-piston callipers for maximum stopping power, although track day enthusiasts may want to specify the optional carbon ceramic discs, which are lighter, and more resistant to wear and fade during heavy use.

One of the designers responsible for the new TT RS told us "this car is about long distance recognition, and then very fine detail up close" and to take care of the first part the RS has several design tweaks to separate it from the standard car. Large air intakes flank each side of the hexagonal grille, there are a new 19-inch set of alloy wheels, and a pair of big bore exhausts and a big fixed spoiler at the back - although those who aren't a fan of this added aggression can delete it as a no-cost option.

The TT RS also features a world-first technology which is likely to find its way onto several other Audi models in the future: OLED rear lights. This technology first appeared on pricey televisions a few years ago, and allows for a more intricate light design, higher contrast, and better viewing angles, and they should last longer and consume less power than standard LEDs. 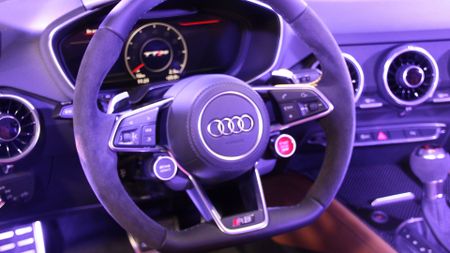 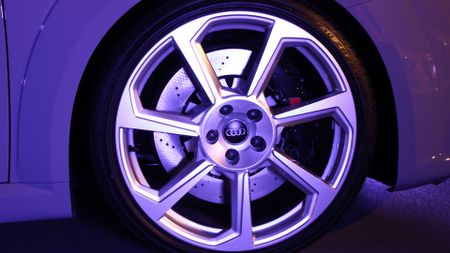 View gallery
On the inside, the TT RS has a few key upgrades to justify the increase in price over the 306bhp TT S - when it goes on sale this summer it'll cost around £50,000 - almost exactly the same as the 718 Cayman, and over £10,000 more than the TT S. You get quilted leather sports seats with RS logos, and the steering wheel borrowed straight from the new R8, with a bright red starter button and drive select controller on either side of the wheel, plus subtle red rings around the row of circular air vents.

Sat on the other side of the showroom, and revealed in the UK for the first time was the TT RS's bigger brother - the all-new R8 Spyder. As with the coupe, it's powered by an epic 5.2-litre V10 engine mounted behind the driver, but for now the Spyder is offered with just a single power output (532bhp) and completes the 0-62mph dash in 3.6 seconds. A more powerful 601bhp 'Plus' model is likely to join the range by the end of the year.

The top speed of the R8 Spyder is 197mph - just a few slower than the coupe, and the latest model is also 113kgs lighter than the previous model thanks to extensive use of carbon fibre in the chassis, and a whopping 50 per cent stiffer too. Audi claims the new model, which has a redesigned fabric roof, will be more refined when cruising too, with reduced wind noise.

As with the TT RS - order books for the R8 Spyder will open in summer, with prices likely to start around the £130,000 mark. It'll be looking to take on the turbocharged Porsche 911 Cabriolet and potentially, a drop-top version of the McLaren 570S. 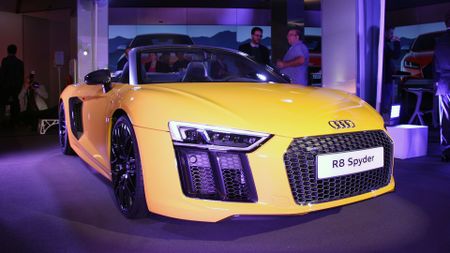 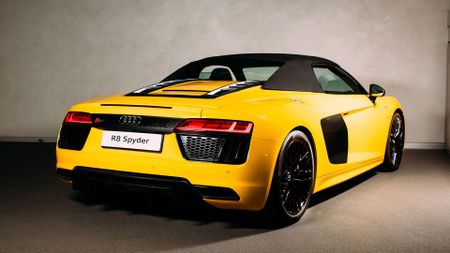 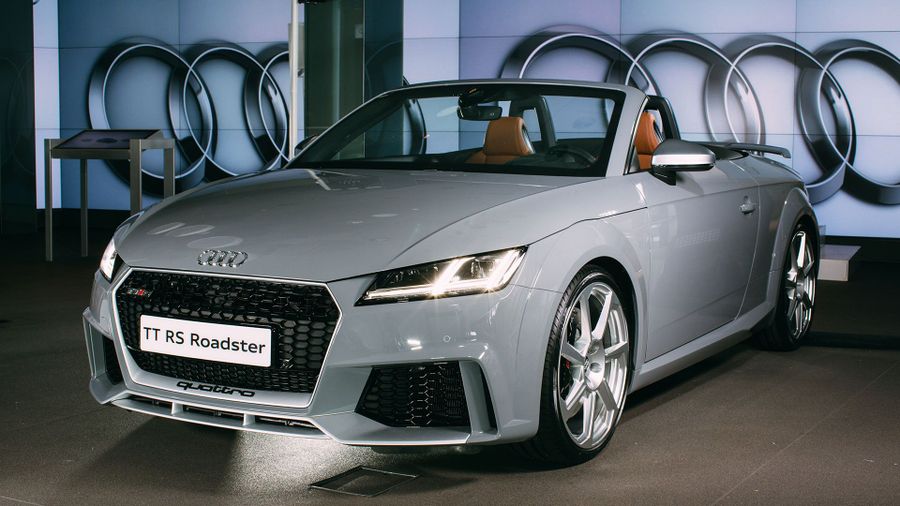