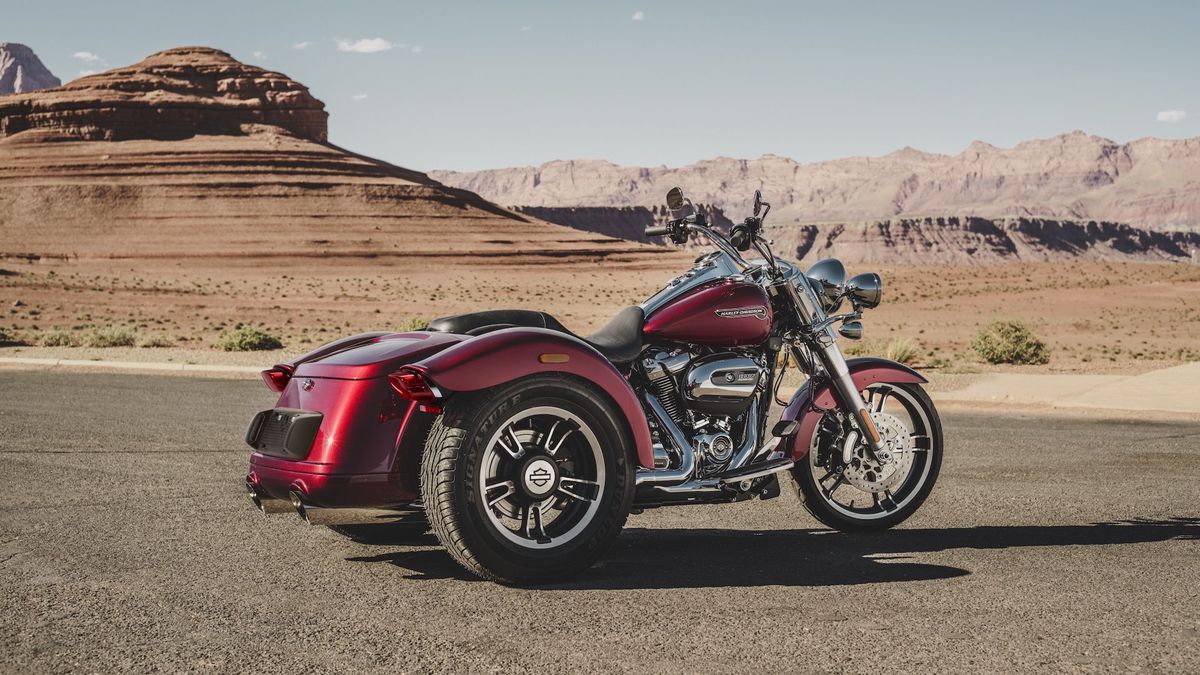 View gallery
Three-wheeled motorcycles are no longer confined to home-built ‘trikes’ or bolted-on sidecars – many of the leading manufacturers, Yamaha and Harley-Davidson among them, now produce their own, while the designs available, ranging from 100bhp ‘leaning’ sport-tourers to learner 125s, and from full-dress Harley tourers to sporty ‘Spyders’ means there’s now a three-wheeler for everyone.

The main reason why any three-wheeler appeal’s over two is simple – they don’t fall over. A ‘bike’s inherent instability can be a safety concern for some riders, and be physically daunting for weaker, smaller or perhaps disabled ones.

Some three-wheelers can also be ridden on a car – not bike – licence, negating the necessity for a car driver to apply for a new licence, complete CBT and so on.

Three-wheeled vehicles have some particular licencing requirements. If the front wheels are more than 460mm apart it is legally classified as a tricycle and can be ridden on a full car licence by anyone over the age of 21. If you’re under 21 or don’t hold a full car licence you’ll need to pass the relevent motorcycle qualification on a two-wheeler. Driving tests for three-wheeled vehicles are only available for those with a physical disability.

But three-wheelers are not all good news. They’re usually more expensive than their two-wheeled equivalent, are physically larger and heavier so are more cumbersome through traffic and can’t offer the same dynamic thrill, either, even though the modern breed of ‘leaning-three-wheelers’ come close.

So, what’s out there exactly? What do they offer and which are the best? Here’s our current Top 5 ‘Best three-wheelers’ to help you decide…
1. Harley-Davidson Freewheeler – the traditional ‘trike’ with class
Legendary American cruiser firm Harley has been at the forefront of motorcycle trikes all the way back to the 1930s when it made its first ‘Servicar’. Today it still offers its ‘TriGlide’ (basically a three-wheel version of its ElectraGlide full dress tourer, for just over £31K and, if that isn’t enough, a specially-customised ‘CVO’ version (standing for Harley’s ‘Custom Vehicle Operations’ division) for a whopping 44 grand. However, if all that’s too much and you fancy a more basic, frills-free version you might want to customize yourself, Harley’s Freewheeler, introduced in 2017, offers the raw, Harley V-twin cruiser experience, complete with latest 114ci ‘Milwaukee Eight’ engine, but with the addition of an extra rear wheel (and a boot!) for ‘just’ £25K. Yes, it takes some getting used to (a reverse gear helps), is big and exposed to the elements, but it’s a proper, ‘old school’ trike with the right badge which Harley buffs who can’t manhandle its conventional two-wheelers would be advised to consider.

Find a Harley-Davidson Freewheeler here.
2. Yamaha Niken GT – the ‘leaning’ sport-tourer
Yamaha’s radical and sophisticated Niken introduced in 2018 is basically a leaning, three-wheeled version of its popular Tracer 900. But instead of one conventional 17inch front wheel held by a pair of telescopic forks, two parallel 15inch wheels are held by separate suspension arms, which provide substantially more grip, yet also cleverly allow the Niken to lean – without falling over. It works impressively and commendably but arguably hasn’t been the success hoped for, partly due to its near-£14K price. However, an updated and improved GT version was introduced in 2019 with two 25-litre panniers, a taller touring screen, heated grips, comfort seat and centre stand which suits its strengths better. No ‘bike’, maybe, but this is as close to it as three-wheelers get – and you’ll always draw a crowd.

Find a Yamaha Niken GT here.
3. Can-Am Spyder RT – the car/bike hybrid
The Can-Am Spyder is a fairly unique proposition among three-wheelers, being a ‘Y-shape’ design with two, non-leaning wheels at the front and a single drive wheel at the rear – and one that’s cruelly largely overlooked in the UK. Launched in 2008 by huge Canadian off-road/utility vehicle specialists Can-Am Bombardier it’s been a big hit in the US, effectively is half-convertible car/half motorcycle and was fully updated for 2020. It’s powered by a 115bhp Rotax-built triple with paddle gearshift, now features a huge colour TFT screen and the RT is its top spec ‘touring’ model, starting at a whopping £26,599. A more basic Spyder F3 model is also available, starting at £16,899 with a naked, ‘entry-level’ ‘Ryker’ model costing just £8899. Cynics argue that it has neither the dynamism of a bike nor the comfort and protection of a car but it does deliver a ‘wind in the hair’ experience with more luggage capacity and security than a two-wheeler, especially if you keep to wide, open roads. 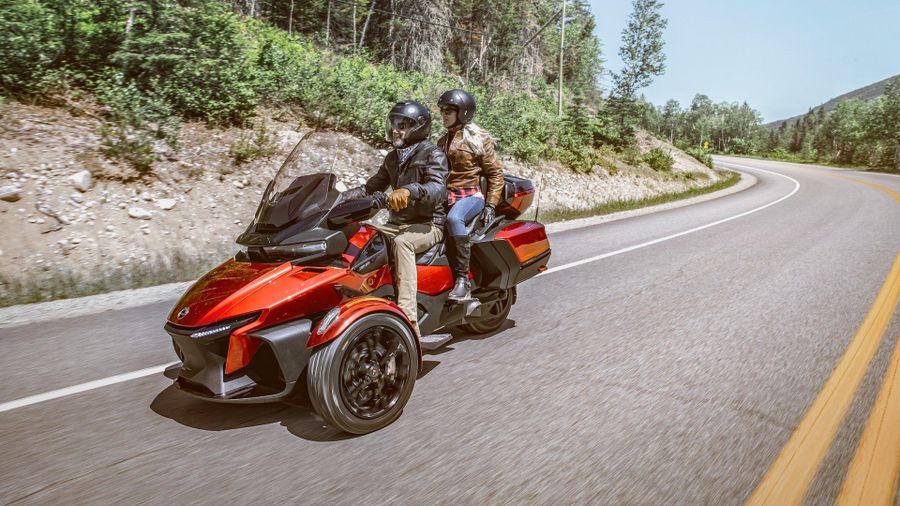 View gallery
4. Piaggi MP3 300 HPE – the original ‘revolutionary’ commuter
The popularity of leaning three-wheeler scooters, all using innovative front suspension systems that allow twin, parallel front wheels to ‘lean’ like a traditional two-wheeled motorcycle yet at the same time provide far more reassuring grip, so avoiding accidents, all dates back to the original Piaggio MP3 in 2007. That bike’s success, providing traditional scooter commuting ability but with the added security and reassurance three wheels brings, has led to a whole family of successors and made it today the mainstay of Piaggio’s range. The latest versions are all now larger, midi or maxi scooters ranging from 300 to 500cc with prices up to £8700 but the new, sporty 300 HPE starts at nearer £6K, is a doddle to ride, produces around 26bhp and makes a brilliant commuter. 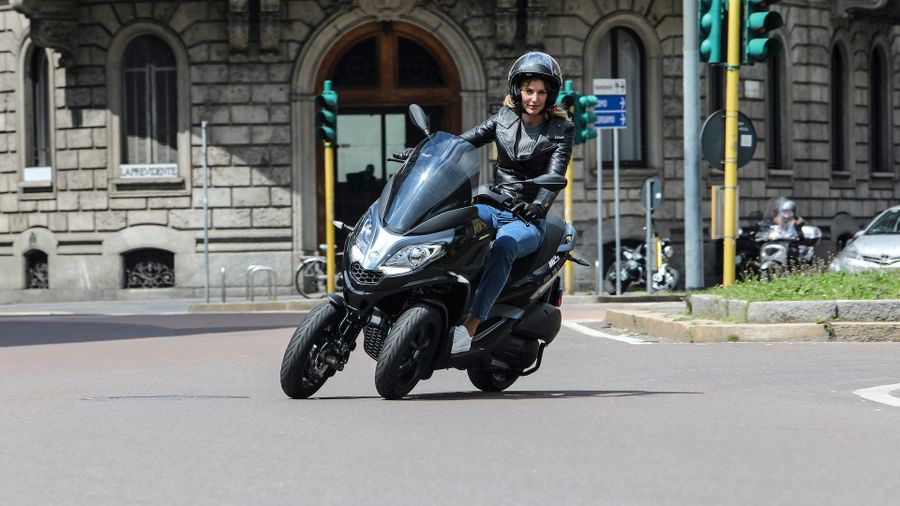 View gallery
5. Yamaha Tricity 125 – the one for learners
Following Piaggio with its MP3 range, of the Japanese major manufacturers it has been Yamaha, which has explored leaning three-wheelers the most. It’s first offering was not the 2018 Niken (above) but the Tricity 125 scooter in 2014, which is similar the MP3 but has larger front wheels for added stability and also a 11PS 125cc single cylinder engine which makes it eligible to ride on L-plates and the best for learners. It’s also the most affordable, costing from just over £4000. The Tricity 125’s success has also now led to a larger version, the Tricity 300, as introduced in 2020, which can be ridden on a car licence, produces 27bhp which is good for around 85mph and costs just over £7500. 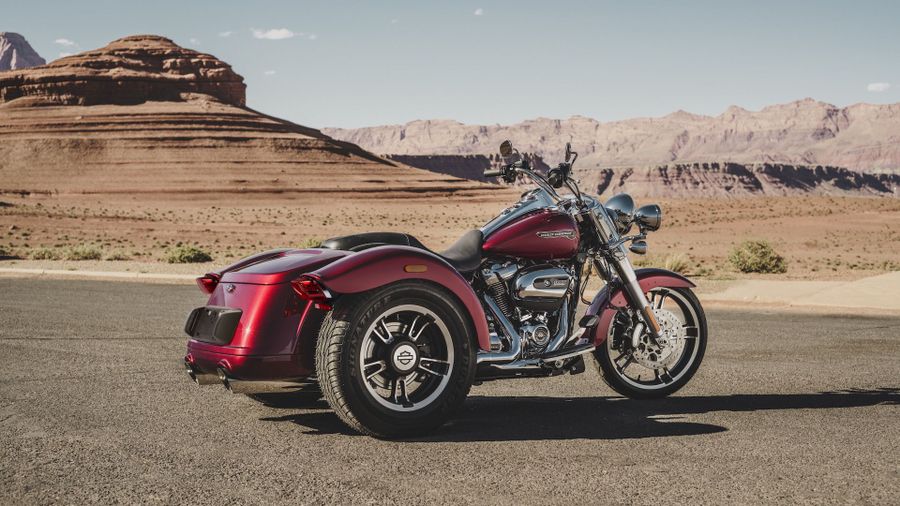