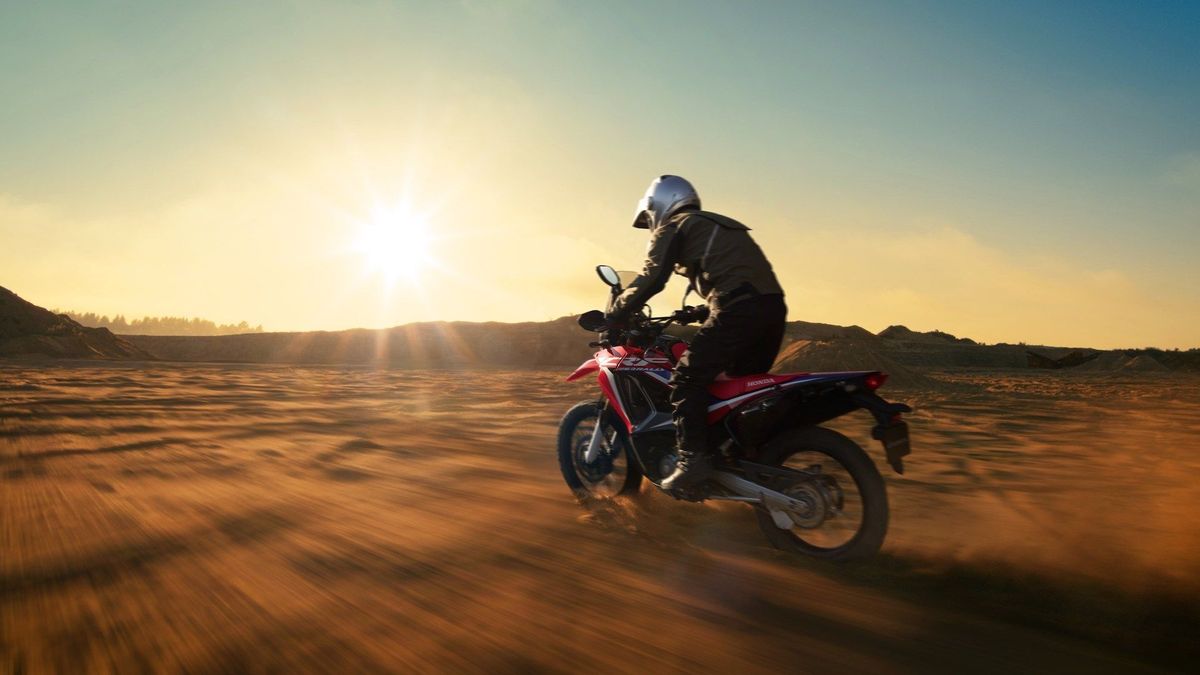 View gallery
After all, with well over 40 different types, sizes and specialities of adventure bike now available – and more again added for 2021 – which is the best for you?

For your delectation and delight there are now beginner-friendly, sub-700cc adventure bikes with, at the other extreme, fully-loaded, 1200cc+ luxury heavyweight versions. There are single-cylinder lightweights and four-cylinder powerhouses. And there are also now ‘adventure bikes’, which, despite their style and origins, have absolutely no pretensions at being able to cope off-road, while, conversely, there are also more off-road-targetted types, which are genuinely capable in the dirt, yet also coping admirably on-road.

Yet even within that latter type there are now more bikes than ever to choose from with, again, more newcomers for 2021 – which is where we come in to help. So, if you’re after a new adventure bike for 2021, want something that’s genuinely capable in the dirt as well as on-road – read on: here’s our experts’ pick of the five best ‘off-road’ adventure bikes for 2021, in capacity ascending order…
1. Honda CRF250/300 Rally – the ‘entry-level’ lightweight
Honda’s smallest adventure bike (‘Big H’ also offers the monster 1200cc V4 Crosstourer, excellent CRF1100 Africa Twin, underrated but ‘road only’ 800cc Crossrunner, commuter-style NC750X and A2-friendly CB500X) is also, arguably, its best off-roader. Launched in 2017 it’s a lightweight single based on the worthy CRF250L trail bike but with a larger fuel tank, fairing and screen for added weather protection plus other detail changes. As such it’s a great, easily manageable off-roader with significantly improved long-distance road ability, although, with only 23bhp, it isn’t a bike for sustained, two-up, fully laden motorway miles. That said, an update to 300cc form for 2021 improves this significantly by raising peak power to 27bhp. So, if you’re planning local-ish rides with a fair bit of dirt fun, at £5649 for the 250 (300 prices have yet to be released) it’s more than worth a look. (KTM also offer a ‘small’, single-cylinder adventure bike, the 390 Adventure with a punchier 43bhp at a similar £5499, but this is a more road-orientated offering.)

Find a Honda CRF250 here.
2. Yamaha Ténéré 700 – the best value all-rounder
One of the best new bikes of 2019, the Ténéré 700 is a true dual purpose, adventure-style bike that revives Yamaha’s historic ‘Ténéré’ desert racer model name and is based on the brilliant MT-07 twin cylinder roadster. With a slightly detuned, 72bhp version of that bike’s 689cc parallel twin it’s both punchy and tractable; with decent, long travel suspension, a dedicated frame and proper off-road wire wheels, it’s a credible off-roader and with a reasonable screen and comfort it can be a credible long distance touring adventure bike, too. Best of all, though, starting at just £9147, the Ténéré’s great value as well. An adventure bike that’s accessible to all, a genuine off-roader and great value? No wonder it’s proved so popular. And, if you want more (the base Ténéré’s spec is a little ‘budget’), there’s now also a blinged-up ‘Rally Edition’ in special heritage racer replica blue livery and complete with crash bars, Akrapovic can, new bash plate, rad and chain guards and more from £10,447.

Find a Yamaha Ténéré 700 here.
3. KTM 790/890 Adventure R – the best off/on roader
Although Yamaha’s Ténéré 700 is a brilliant, ‘middleweight’ adventure bike – it’s not the only one. BMW has a variety of now 750 and 850cc F-GS parallel twins, even in uprated and more off-road specific ‘Adventure’ form which, although failing to sparkle, are certainly capable. While Austrian off-road experts KTM, who are more usually known for their large capacity, dirt-capable V-twin adventure bikes, have also launched their take on the middleweight adventure bike in 2019 – the 790 Adventure. Based on the even more punchy 95bhp parallel twin which debuted on KTM’s 790 Duke roadster a year earlier, like many KTM Adventures the 790 comes in two forms – a standard version and a more dirt-orientated ‘R’. And it’s this latter bike which adventure riders wanting a true dirt machine should take most seriously. Where the Yamaha is built down to a price slightly, the R wants for nothing. It has top spec, multi-adjustable, long travel WP suspension, proper 21/18inch off-road wheels, quality electronic rider aids including four rider modes and a slick, full colour TFT dash. It’s a brilliant ride, too, both on and off-road – probably the best compromise anywhere. But at £10,999 it’s nearly £2K more than the Yamaha (which is almost as good) and maybe that’s why KTM are improving it further for 2021 with an even punchier 890 engine, although as we write that bike’s price – and abilities – have yet to be revealed. 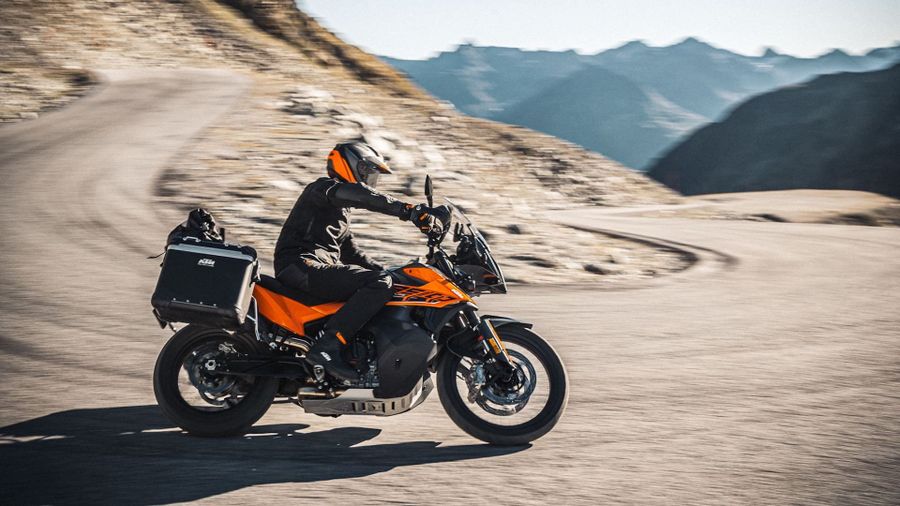 View gallery
4. BMW R1250GSA – the original true ‘adventure’ bike
BMW came up with the original GS way back in 1980 and its big, boxer-twin powered ‘go-anywhere’ model established the template for the modern adventure bike when it introduced the first R1150GS Adventure variant in 2002. That bike was basically the standard GS but with added off-road and long distance ability c/o off-road suspension and wheels, extra crash protection and the now signature, monster long-range fuel tank. Given global publicity by Ewan MacGregor and Charley Boorman in the ‘Long Way Round’ TV series, it proved a huge success, becoming so popular that, along with the standard GS, it and its more recent evolutions have been best-sellers ever since. Now 1250cc and 134bhp via BMW’s latest ‘ShiftCam’ boxer shaft drive powertrain, with a truly versatile chassis, decent off-road ability, bags of classy touches and BMW accessories, the GSA remains a ‘two-wheeled Range Rover’ that does it all. True, it’s also something of a mammoth that can’t match smaller, lighter bikes off road, prices now start at nearly £15K (before you’ve started adding on extras) and 2021’s special edition ‘40th Anniversary’ version with special paint and extras is even more at over £16K, but the GS is still the benchmark adventure bike which, in Adventure trim, is also a credible off-roader. 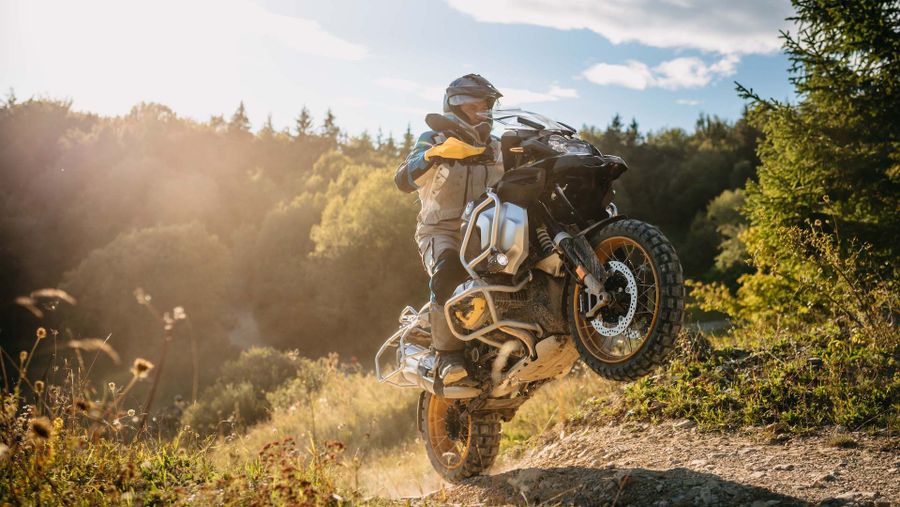 View gallery
5. Ducati Multistrada 1260 Enduro – exotica that can handle the dirt
The big news for Ducati’s hugely- impressive and successful adventure bike, the Multistrada, for 2021 is the replacement of its already potent 1260cc 160bhp V-twin powertrain with an all-new 1158cc 170bhp DOHC V4 developed from that of the Panigale V4 and also now fitted with ‘radar-controlled’ cruise control among other gizmos. It’s a brilliant bike, by all accounts, too – but, like the standard 1260, it’s no off-roader. To cater for dirt fiends, in 2016 Ducati introduced an Enduro version of its then 1200 Multistrada, complete with the usual longer suspension (including double, not single-sided rear swing arm), off-road wheels, larger tank etc, which then grew into the MTS 1260 Enduro in 2019. Despite the arrival of the V4s, this bike lives on for 2021 and, although bigger than the original 1200, is actually a softer, friendlier machine. Though still slightly intimidating and no true off-roader like, say, KTM’s 790 Adventure, it can handle the dirt, is a more then capable tourer, and is just as much of a hugely sophisticated, superbike-quick road machine as the V-twin Multistrada ever was. The Multistrada 1260 Enduro may be pricey, starting at £17,895, but if you want your adventure bike to be off-road capable yet still Italian exotica quick, this is the one. 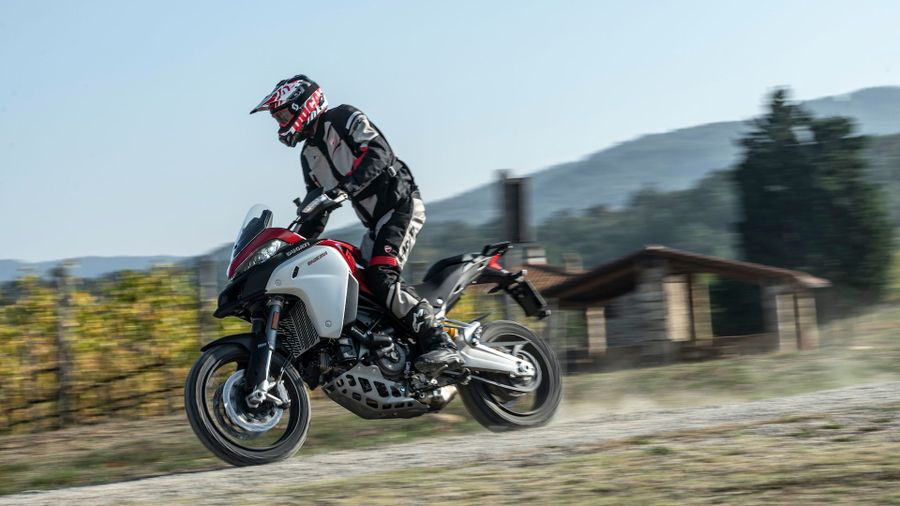 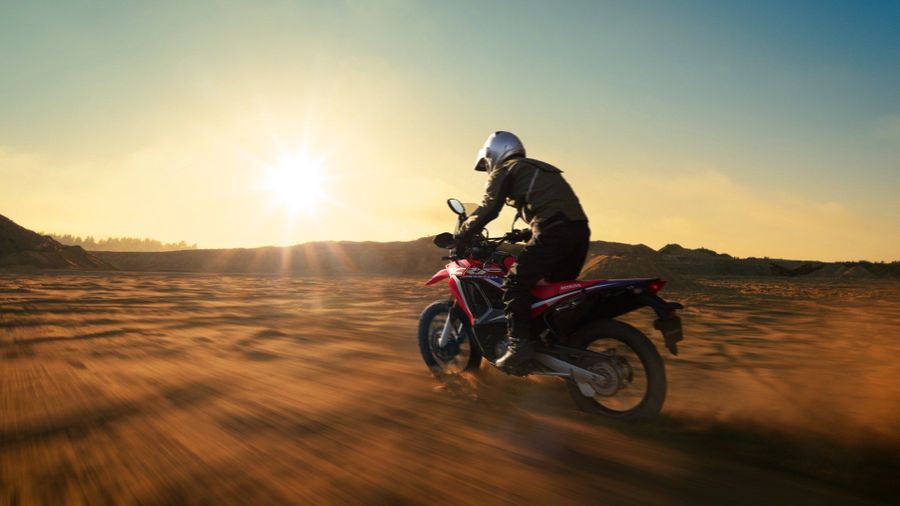