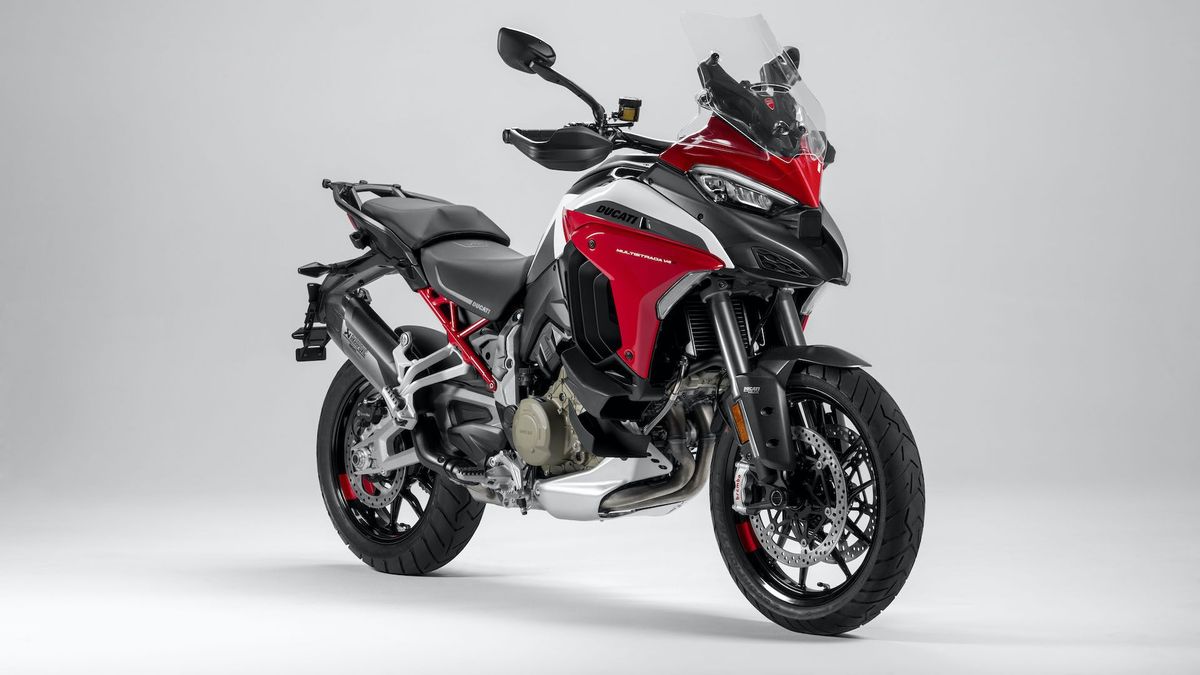 View gallery
2020 may go down as the year of Coronavirus and a disaster for normal day-to-day life – but 2021 is already proving to be a bumper year when it comes to new bikes.

The onset of Euro5 in January and with it tougher emissions and noise regulations, which forced significant updates to many existing popular models, has led to a flood, not just of updated bikes – but also of all-new machines.
In fact, there have been so many new bikes for 2021 – ranging from superbikes from the likes of Kawasaki, Ducati and BMW to impressive new commuter scooters from Honda, Yamaha and more – we thought it worthwhile to do a complete round-up of what’s hot. If nothing else, it’ll give us all something to look forward to, and plan our biking year with, when winter gives way to spring, the pandemic crisis hopefully, finally, subsides and life returns to some sort of normality. So here’s our pick of the bunch (in no particular order)…
1. Ducati – new V4s and more
The Italian firm’s all-new 2021 Multistrada V4, which marries Ducati’s brilliant, formerly V-twin-powered, Multistrada adventure bike with a new, retuned, 170bhp and now non-Desmo version of the V4 engine which debuted in the Panigale superbike in 2019, has been previewed by Autotrader before. Since then, however, this even more desirable Multistrada V4 S Sport version has been unveiled as has a new ‘SP’ version of the Panigale V4, a track-focussed, 214bhp, ultra-light limited edition complete with carbon wheels, the best of everything and costing a whopping £32,000! For us mere mortals, meanwhile, there are restyled, updated versions of the Supersport 950, a refreshed X-Diavel cruiser line-up and, for retro fans, the new Scrambler Nightshift, a moody, twin-seat version of its popular Scrambler 800 which promises a brilliant blend of style and practicality.
2. Kawasaki – the ‘king’ gives you wings!
Kawasaki’s ZX-10R Ninja is a superbike legend. The reigning World Superbike champion (for the past six years in succession in the hands of Ulsterman Jonathan Rea) thanks to its combination of sheer 200bhp speed, slick sophistication and subtle, continual evolution. Throughout all of that, however, its looks have remained largely unchanged – until now. For 2021 the big Ninja gets an all-new, aerodynamics-inspired look incorporating the now ‘must-have’ winglets, is lighter, with improved electronics and even offers improved weather protection and cruise control! The Ninja’s not Kawasaki’s only newcomer for 2021, though, there’s a new, uprated SE version of the Japanese firm’s wild, supercharged, Z H2 super naked while its big, four-cylinder Versys 1000 ‘adventure tourers’ are uprated, too – a base ‘S’ version gets a new TFT dash, quickshifter, taller screen and more while the top-spec ‘SE’ also comes with semi-active Showa suspension. 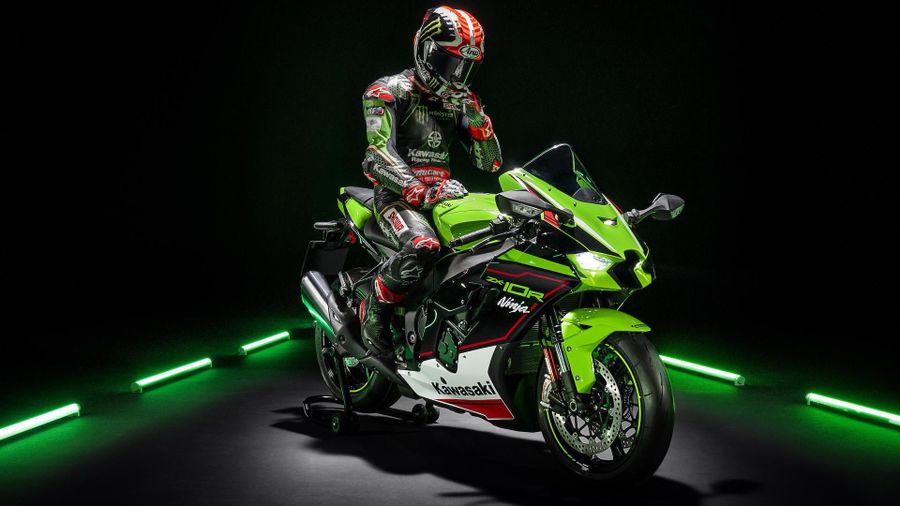 View gallery
3. Triumph – the Trident returns
Again, we’ve already reported the return of Triumph’s famous, historic Trident model name with the arrival of the British firm’s all-new, novice friendly Trident 660 but it’s worth another mention here. It’s a naked, sporty roadster targeted at hugely popular machines such as Yamaha’s MT-07, the key difference being an all-new three-cylinder engine producing a healthy 80bhp (the current MT-07 has 74bhp). That, along with a decent chassis including inverted forks and fat tyres should give class-challenging performance and fun, a triple character all its own and all for just £7195 (the current MT-07 is priced £6700, with a newcomer also coming for 2021, see below). Nor is that the end of the Triumph new-for-2021 story: the Hinckley firm has also added a new Tiger Sport 850 to its extensive adventure bike line-up. It’s intended as a new, entry-level offering into Triumph’s Tiger 900 family, as introduced in 2020. As such it uses the same 888cc triple with different mapping to produce 84bhp down from 94 and, although, spec if more basic it’s still pretty decent with TFT screen, Brembo brakes and more, all for a tempting price starting at just £9300.
4. Honda – more, more… MORE!
As the world’s largest motorcycle manufacturer and biggest of the Japanese ‘Big Four’ factories it should perhaps be no surprise that ‘Big H’ has unveiled more new 2021 models than any other but even we were unprepared for the sheer flood of new and updated bikes it has unleashed for 2021. Many, inevitably, are Euro5-driven updates, including tweaked versions of its popular CB500 and CB650 models, but some are more than worth singling out here. First, there’s the CMX1100 Rebel – an all-new, big capacity cruiser, Honda’s first in years, with a similar style to the novice-friendly CMX500 Rebel it’s inspired by but with the parallel twin engine from the Africa Twin adventure bike but retuned to 86bhp (from the Twin’s 100bhp) to give more torque and character. Being Africa Twin-derived also means Honda’s novel DCT semi-automatic transmission is available, another first in the class. Prices start at just £8999. In addition, Honda’s popular NC750X gets a facelift, as does the X-ADV ‘adventure scooter’, there are new 125, 350 and 750 Forza scooters, a new, even more economical CB125F commuter, an updated version of the cute MSX125 Grom monkey bike, the CB125R is improved further with a more powerful engine, the list goes on… 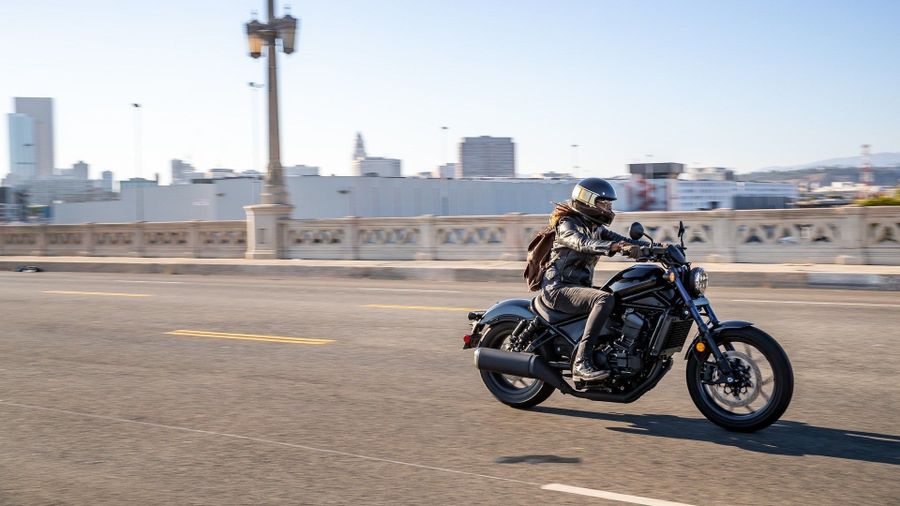 View gallery
5. Yamaha – fresh, new MT families
If Honda is leading the way for new 2021 Japanese bikes historic rival Yamaha isn’t far behind. The biggest news is an almost total overhaul for its hugely successful MT-07/MT-09 roadsters and their adventure-sport spin-offs, the Tracer 700 and 900. Both roadsters not only become Euro5 compliant but get all-new styling, a new dash and switchgear and improved brakes. The three-cylinder 900 (the 700 is a twin, but based on the same engine architecture) is enlarged slightly to 889cc giving a small performance boost, gets a new Deltabox frame and is joined by a new, uprated ‘SP’ version with multi-adjustable forks and an Ohlins rear shock. The Tracer versions get significant updates, too. The 700, which was refreshed and facelifted in 2019, is renamed the Tracer 7 and is now joined by a GT version complete with panniers, comfort seat and larger screen while the 900 similarly becomes the Tracer 9, gets the MT-09’s engine and chassis updates, new styling, dual TFT screens and is also joined by a GT version. Nor does Yamaha’s news end there: on the upside there are two new 125cc scooters, the NMax and the D’elight while, on the slight down, the previous R6 supersports is axed, although a track-only ‘R6 Race’ lives on… 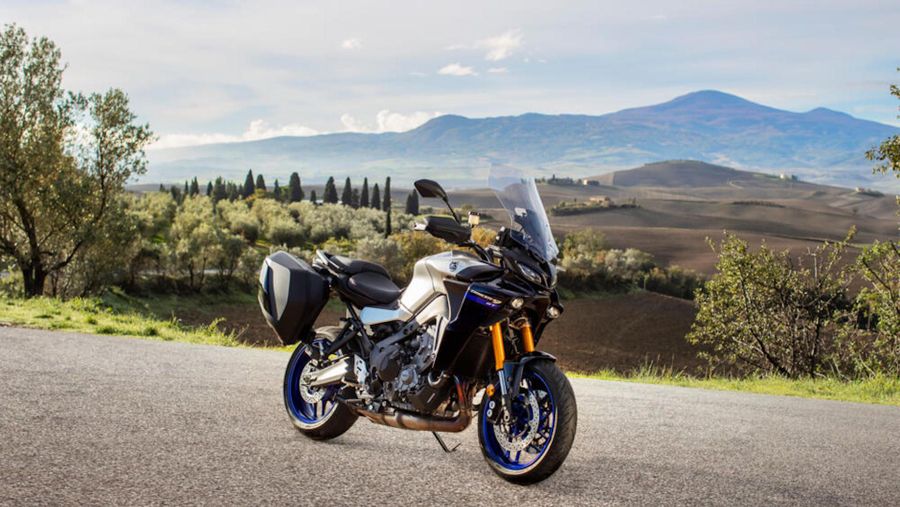 View gallery
6. BMW – new R18 Classic and S1000R
Of the non-Japanese manufacturers German giant BMW has arguably the biggest range of 2021 new models on offer – and there’s something for everyone with updates to its heritage, adventure and sports machines and in capacities ranging from 310 to 1250cc. Two of the most significant newcomers, the new M1000RR superbike and updated R1250RT, have been covered here before but equally significant are more recent additions including a new ‘bagger’ version of its R18 cruiser and an all-new S1000R super naked that’s now based on the latest S1000RR superbike and is lighter, more sophisticated and better-looking than ever. Elsewhere, BMW’s entry-level G310R also receives a Euro5 update as has its popular R nineT retro line-up, which also get new LED lights, a styling tweak and improved electronics. Three versions are available: the standard R nineT, the more budget R nineT Pure, the enduro-styled Scrambler and the Urban G/S, all with new paintjobs. There are also new ‘40th Anniversary’ editions of its best-selling R1250GS adventure bike, plus also the F850GS version. 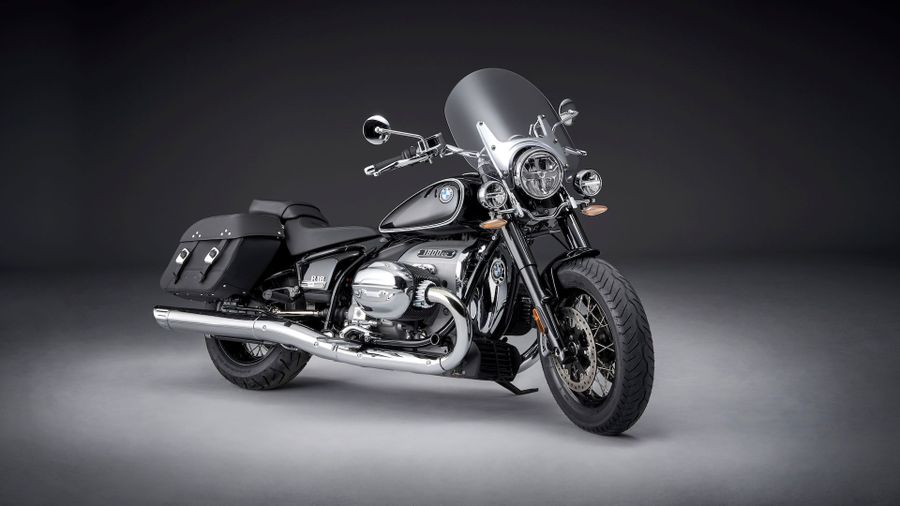 View gallery
7. KTM – new 890 Adventure
The Austrian off-road specialists biggest news for 2021 so far is its new 890 Adventure – although we’re still hopeful of seeing an all-new 1290 Adventure sometime soon. The 890 is basically a larger, more potent replacement for the 790 Adventure which itself was only launched in 2019. It uses the 90cc larger 889cc parallel twin which debuted in 2020’s 890 Duke and which puts out 103bhp and 73.8lbft. Much of the chassis is the same as the 790 but there are also uprated brakes and improved electronics including riding modes, traction control and even cruise control.
8. Suzuki – not much to see here…
Of the Japanese ‘Big Four’ manufacturers, Suzuki has far and away the least new offerings for 2021 – so far. The hugely-anticipated new Hayabusa hyperbike has yet to be officially unveiled while changes elsewhere are so far limited to Euro5 updates to its 650cc V-twins – the V-Strom 650, SV650 and retro SV650X – along with some new paintjobs just so you know you’re getting the new one…
9. Aprilia – RS660 shines out
OK, so this is relatively old news, the Italian firm’s new middleweight sports twin being unveiled as far back as the back end of the summer, but it’s still so good it’s worth a reminder here. The sweet Italian supersport is powered by a 99bhp, 659cc parallel twin that’s essentially half Aprilia’s 1100 V4. The chassis is light yet roomy and real world comfortable; it’s got a quality spec including impressive electronics, it looks great and is priced just £10,150 – all enough, in fact, to make you wonder if this could the start of a new, relevant, affordable middleweight supersports class. 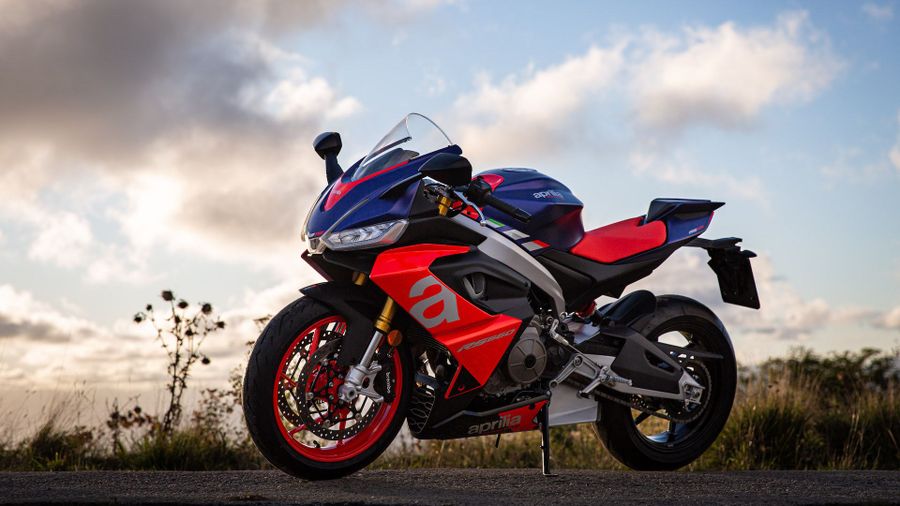 View gallery
Anything else?
Yes – most certainly. The rise of Chinese-built brands continues with Benelli and CF Moto both introducing significant new, larger capacity models for 2021. Benelli’s new Leoncino 800 comes in two guises, both powered by a parallel twin producing 82bhp – a stock roadster model and a trendily-styled Trail version complete with knobbly tyres, wire wheels and upswept pipes. While, not to be outdone, newcomers CF Moto, previously best known for its up-to 650 range of roadsters and touring machines has also unveiled three new 700cc machines – the 700 CL X roadster, 700 CL X Sport and 700 CL X Adventure. Who said there wasn’t anything to look forward to in 2021!
Looking for a brand new bike?
Browse over 3,500 here. 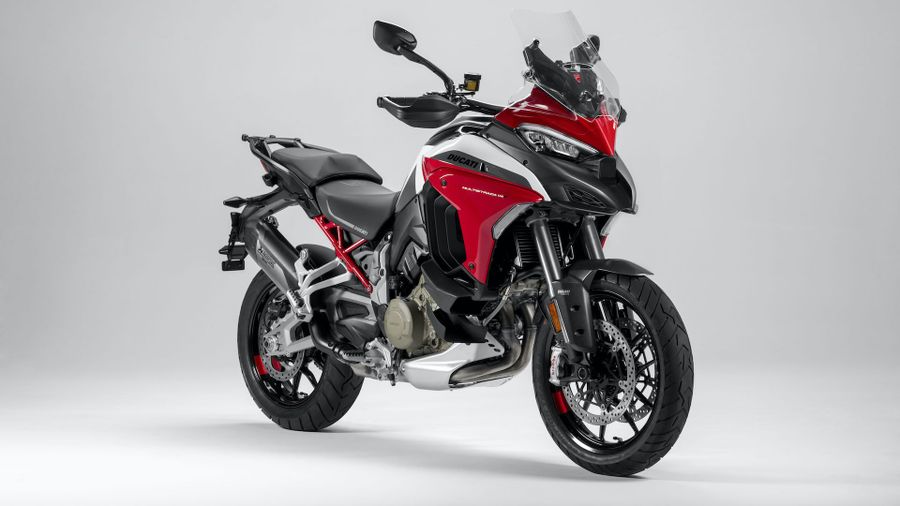