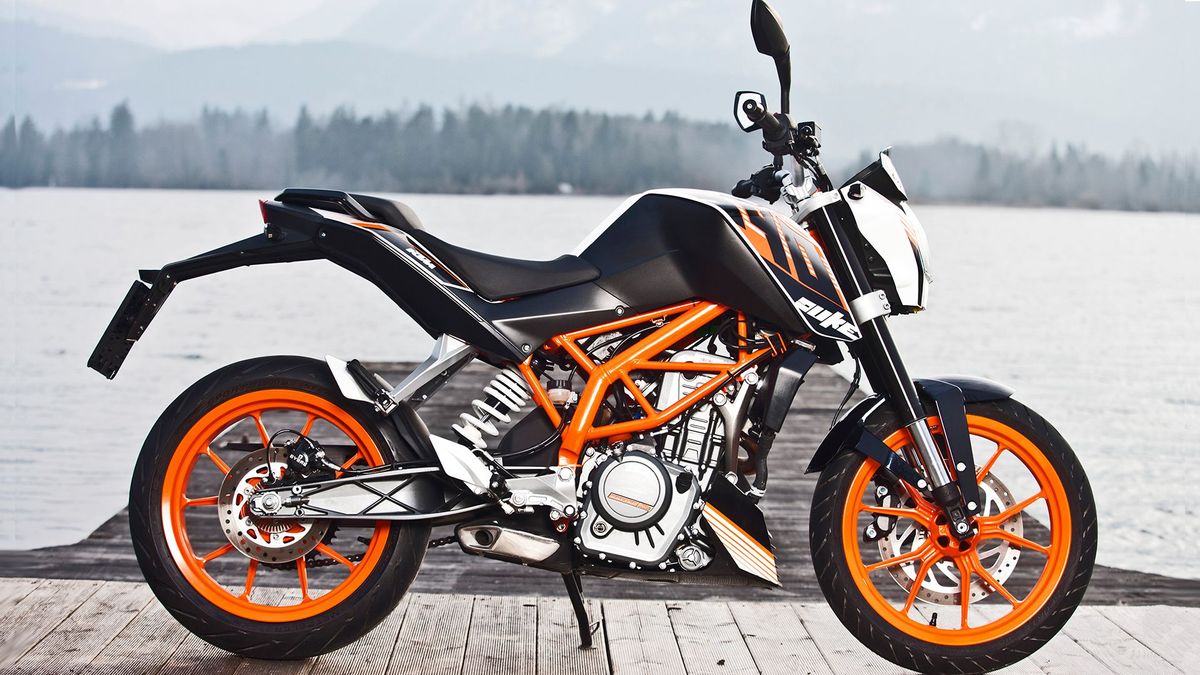 KTM’s stylish, Indian-built single is capable, well equipped and entertaining, whether you’re an A2 licence-holding novice or have been riding for years. It has some tough opposition from Honda’s CB500 twins, but the Duke is a classy bike with an attractive price tag.

The Duke is a simple machine but it’s reasonably practical, at least for relatively short journeys. It’s reasonably quick, handles well, is light and manageable, and should prove reliable. Weather protection is minimal but that’s to be expected in this class. Storage ability isn’t great: the plastic tank means you can’t use a magnetic tank bag, and there’s not much room under the seat. A typical fuel consumption figure of 60mpg gives a respectable range of well over 100 miles from the 11-litre tank.

As a fairly small-capacity single, the Duke is pretty inexpensive to run. Fuel consumption dropped below 60mpg with hard use but averaged 75mpg under more typical riding, according to the instrument panel. Wear on items such as tyres, chain and brake pads should prove relatively light, too. And resale values should hold up well.

How reliable is it?

his will be an important test for the Indian-built single. There have been a few concerns about quality of the Indian-produced singles although KTM insists their standard is identical to that of Austrian-built machines. All 390s for European sale are built at Pune in India, then shipped to Mattighofen for inspection and dyno testing before being delivered to dealers. Some issues are mentioned on the forum at https://www.ktmduke390forum.com as might be expected, but there’s no pattern of serious trouble

You don’t expect much equipment as standard with a budget-priced naked single but the Duke’s basics are competent enough, including the well-designed instruments and switchgear. And there are plenty of accessories available if you want to spend money on upgrading it. These include an alarm, soft luggage, racing footrests and an LED “illumination kit” for the fuel tank. There are also crash-bars for the engine, and bungs to protect the forks and swing-arm. 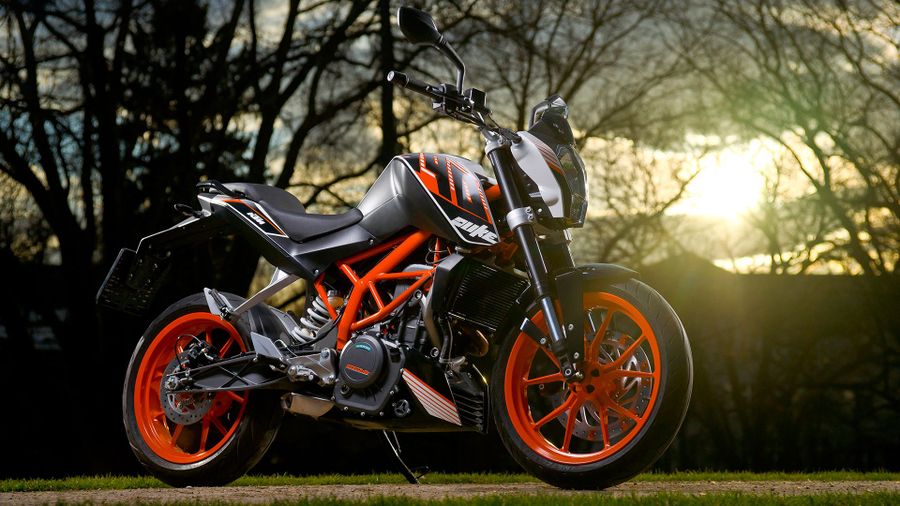 View gallery
“ For this sort of money, it’s certainly a very desirable bike if style and entertainment are high on your list of priorities ”

The Duke provides good looks, a cool European brand name and lively performance that’s right on (or in fact slightly over) the maximum that a bike can deliver on an A2 licence. It’s respectably practical so makes sense even if you have a full licence, especially because it’s cheap to run and so competitively priced, at £4,499 with ABS. For that sort of money it’s certainly a very desirable bike if style and entertainment are high on your list of priorities. 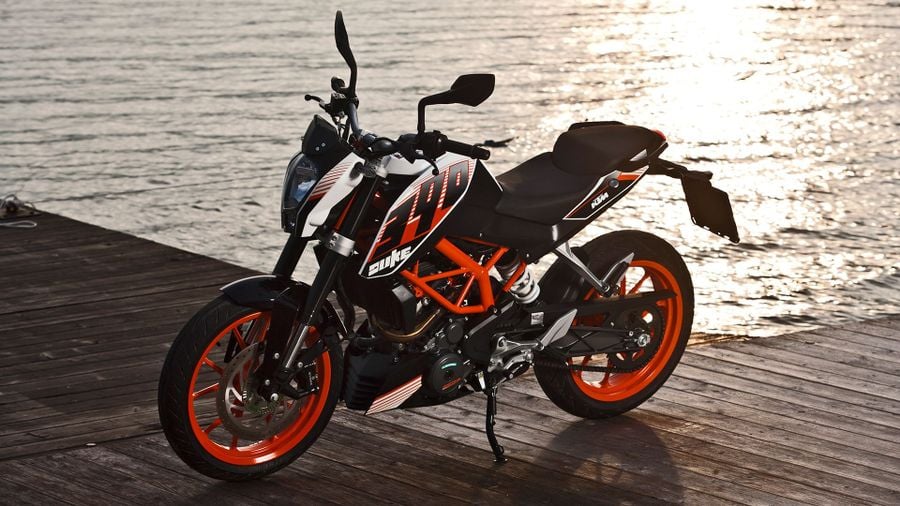 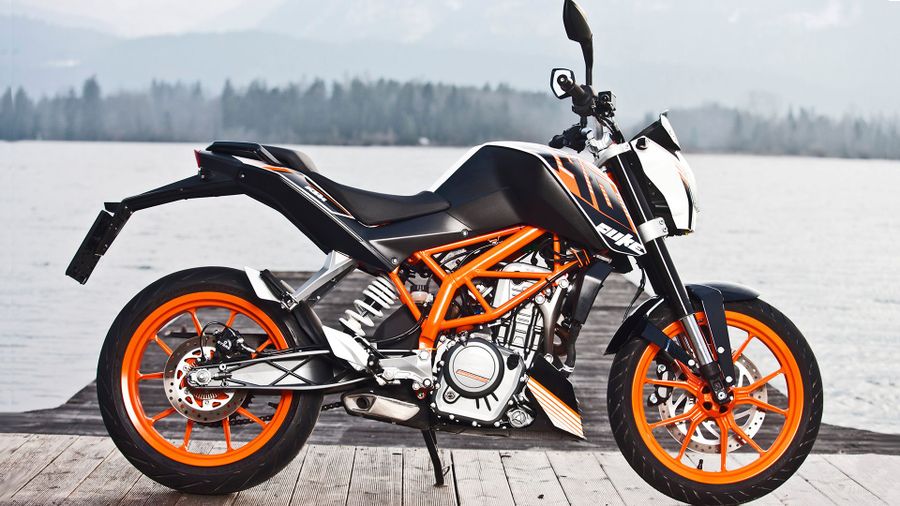 View gallery
“ The 390 looks typically sharp and edgy, with its stubby, angular shape, and its bright orange frame and wheels ”

Like most KTMs over the years, the Duke was styled by Kiska Design, the firm based near the bike manufacturer’s base at Mattighofen in Austria. The 390 looks typically sharp and edgy, with its stubby, angular shape, and its bright orange frame and wheels. It loses a bit for coming in just one colour scheme (although the white-based one is fine), and some more for looking so similar to its smaller siblings.

The Duke is typical of a mid-sized naked bike to sit on, with an upright riding position and slightly raised one-piece handlebar. Its footrests are quite high and rearset, but despite being tall I didn’t find my legs getting cramped. At 800mm the seat isn’t particularly low, but the bike is light enough to make life fairly easy for shorter riders. The seat is quite firm and thin but has a useable pillion seat, with grab-handles that double as bungee points. 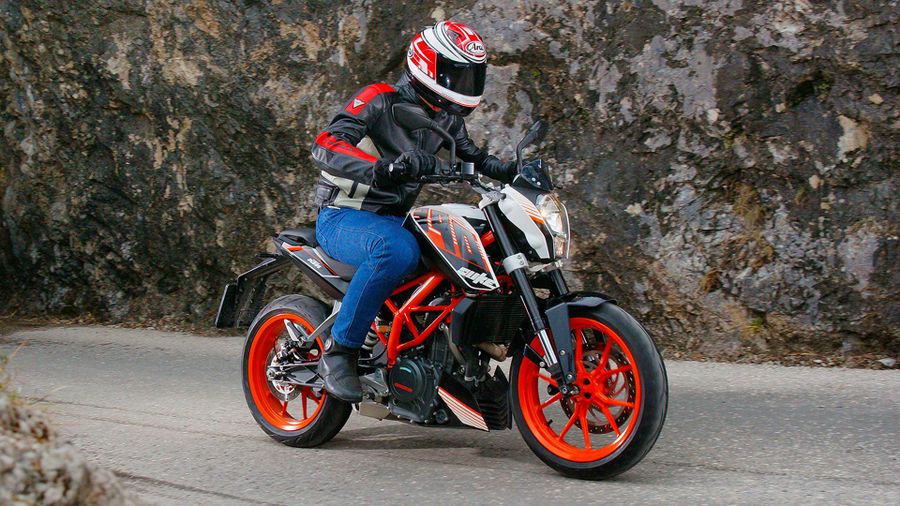 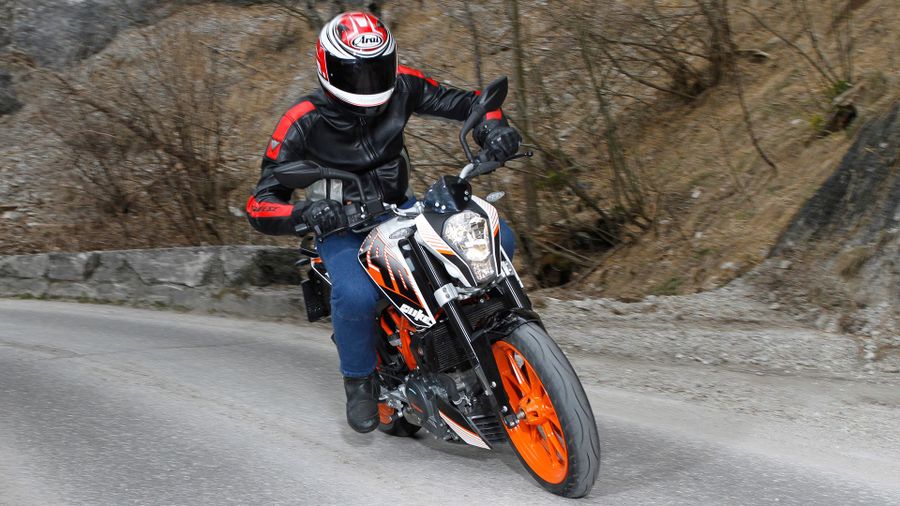 The Duke is as lively, responsive and manoeuvrable as you’d expect of a slim and light single. The controls are easy to use, and the 375cc dohc, four-valve engine pulls from low revs with a very smooth throttle response. With six gears the KTM was never going to be as effortless as a scooter, but it’s easy to ride in town.


The 390 might be a simple road-going single but, being a KTM, it still has a reasonably sporty character. Its 44bhp output and light weight (just 139kg dry) mean it accelerates to 70mph quickly. At that speed it’s smooth and relaxed, especially by single-cylinder standards. There’s enough power to get to 100mph, with a little more to come.


For maximum performance, you have to keep the motor spinning towards the 9,500rpm mark at which its maximum output is produced. But the engine is impressively flexible for a mid-sized single, so inexperienced riders shouldn’t have any problems. The 390 actually has to be restricted slightly for A2 licence holders, using a different ignition map that cut a couple of horsepower, because in standard form its power-to-weight ratio is just over the 0.26bhp/kg class limit.


Braking power is not quite so impressive. The front disc is slightly bigger than those of the smaller Dukes (300mm against 280mm), but the four-pot Bybre radial caliper needed a fairly firm squeeze of the lever. Perhaps it’s unfair to complain, though, when an efficient ABS system comes as standard. 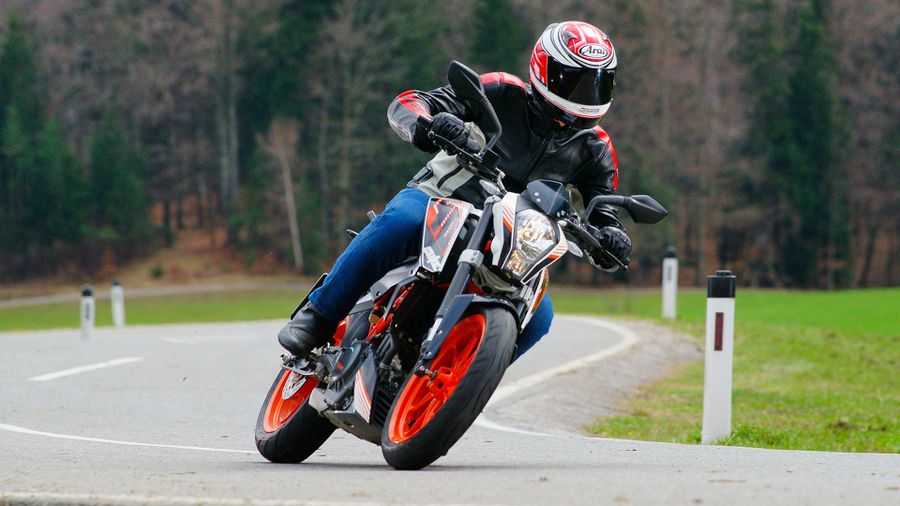 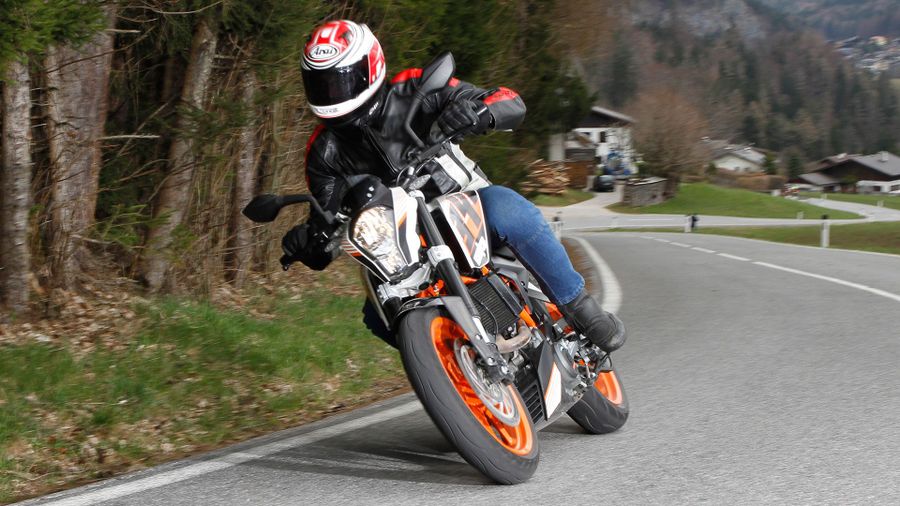 View gallery
“ The Duke’s light weight, reasonably sporty geometry and wide handlebars mean it can be flicked into bends with ease ”

The 390’s tubular steel frame layout is identical to that of the smaller singles. Like the 125 and 200 Duke, the 390 wears cycle parts that are mostly made in India by subsidiaries of European specialists. The 43mm forks and rear shock are by an offshoot of WP, KTM’s own suspension firm. Brakes are single discs at each end from Bybre, linked to Brembo. Wheels are similar aluminium castings with 17-inch diameters, shod with Metzelers instead of the smaller models’ Indian-made tyres.


Handling is very rider-friendly, characterised by a wonderfully agile yet stable feel. The Duke’s light weight, reasonably sporty geometry and wide handlebars mean it can be flicked into bends with ease. Yet its steering is very neutral, so the bike simply goes where it’s aimed. Suspension is fairly firm, so bigger bumps are felt though the seat, but both ends are well enough damped to keep control. This bike has an edge in grip over the smaller Dukes thanks to its excellent Metzeler Sportec M5 rubber.

KTM’s service guide says the bike requires a 90-minute service every year or 3,100 miles, and a two-hour service every two years or 10,000km. Like all KTM’s roadsters the 390 comes with a two-year, unlimited mileage warranty. 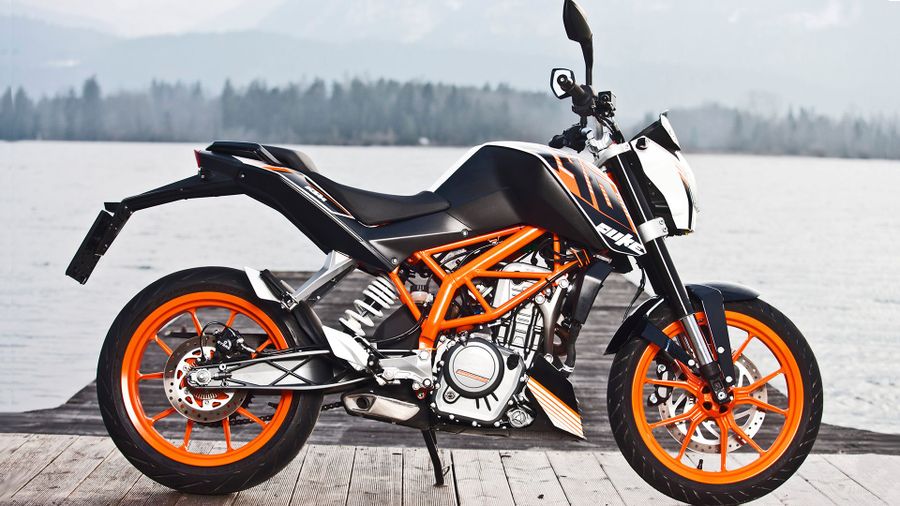