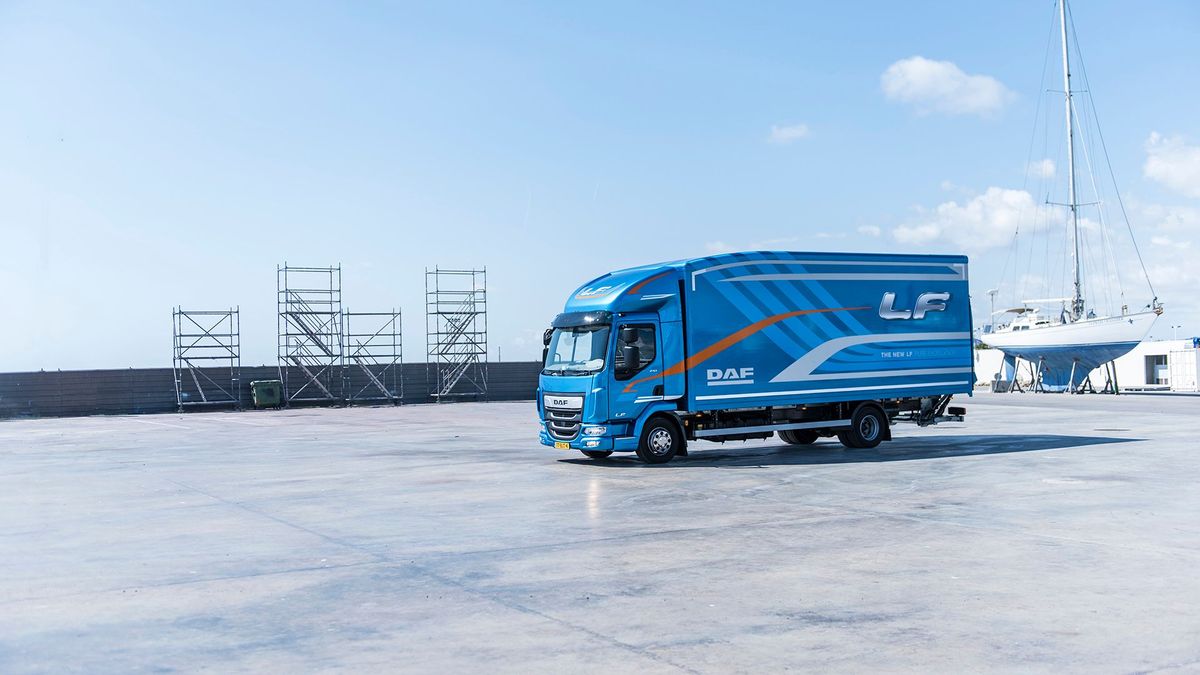 The Leyland-assembled LF (Light Forte) can be traced back to the Leyland Roadrunner, which became the Leyland DAF FA45 in 1991, and then the LF45. It retained Cummins as its engine supplier and moved to a Euro-3 four-cylinder 3.9-litre common-rail engine, with three ratings 135, 150, and 170hp. Also available with a little more oomph was Cummins six-cylinder, 5.9-litre engine offering 180 and a 220hp.

Using the same engine technology DAF introduced Euro-5 engines in 2007, two years ahead of the deadline, with a fourth power rating for the 4.5-litre, the 210hp. To meet Euro-5 it increased the AdBlue rate to hit the tougher NOx limit, tweaked the fuel-injection pressure system and installed new pistons.

In 2013, DAF LF launched its Euro-6 version of the four-cylinder Cummins derived from a smaller 3.8-litre ISF engine, enlarged to 4.5-litres (badged as the PX-5) with three power ratings; 150, 180 and 210hp. While this meant introducing exhaust gas recirculation (EGR) it also saved some weight to offset the new but heavier exhaust after-treatment system.

Initially the transmission was exclusively ZF, with the five-speed, or the six-speed overdrive, and by Euro-4 a six-speed automated was also added to the options.

Moving to Euro-6 and all the added componentry forced DAF to switch from rod-controlled gear shifting to cable, and subsequently seek a new supplier for its five-speed manual, which is now provided by Eaton. ZF continue to supply the six-speed manual and automated transmissions. Today 60% of the LFs sold are fitted with the six-speed automated gearbox.

Regards choice, the exception is the LF City, which is only available with the Eaton five-speed manual. It was the only system that would allow the exhaust pipe to go between gearbox and engine, allowing it to achieve higher after treatment inlet temperatures.

To keep costs down DAF Trucks adopted the same cab shell used by Iveco for the Eurocargo, both of which are built by Renault Trucks. It has been continually tweaked, usually around the same time as a new engine was unveiled.

There are two cab sizes available; the day-cab, and the extended cab. The extended version is available in two guises; the extended day-cab provides extra storage, and the sleeper option is fitted with a single bunk that needs assembling by the driver.

The interior has been enhanced and improved at various stages, with the current model the culmination of evolution rather than any specific revolution. It’s always been an accessible and comfortable workspace for the driver albeit Spartan-like.

‘Confined’ best describes the space in the day-cabs with limited storage beyond the passenger footwell. There is a compartment on the engine tunnel, side pockets in the door panels and two large compartments above the windscreen.

The extended day cab has three additional lockable storage boxes behind the seats as standard; two with 39-litres capacity and one with a 23-litre capacity. Choose the sleeper option and its comfortable for an odd night away, anything longer and the DAF sales team will steer you towards a CF.

The key safety elements are the Advanced Emergency Braking System, Forward Collision Warning, Adaptive Cruise Control and Lane Departure Warning System, which are standard with any LF with rear-air suspension.

Air-suspension remains the expensive option, but since November 2018, DAF, like its competitors, has made ABS standard on trucks with steel suspension.

Historically the most popular specification is the day-cab with the 150hp engine. Since the 150-version is now part of the PX-4 operators now go for the new entry-level PX-5 180hp version as the default engine of choice. Fitted with a six-speed automated box it is simple to drive, responsive and handles with confidence.

However, the 7.5 tonne sector is becoming a little more nuanced and a one-spec-fits-all no longer applies. The new LF City is a new entry-level product fitted with the PX-4 engine, and provides competition for the lighter cab-over options from non-European truck manufacturers.

With a low kerbweight, 3,234kg for the chassis cab, it provides a more versatile specification for the utilities, local council, parcel and allied trade carriers for last-mile deliveries. It has a smaller engine, a five-speed Eaton manual gearbox with a direct-drive top gear and 3.73:1 rear axle ratio.

Here the 150hp version continues to thrive. It is designed to get around town predominately in third gear, it lugs down to 800rpm and chugs along at 15mph, press the accelerator and it will respond accordingly through the peak torque band plateau to 2,200rpm at 30mph. Ideal for the city.

Third gear covers a multitude of sins but it doesn’t cater for everything so if you want to crawl to a set of lights without stopping then second gear is required. Through the city it’ll be unlikely that the driver will need to use fifth gear at all. It handles remarkably well thanks to a short 3.55m wheelbase and is seen by the Dutch as a ‘fun vehicle to drive’.

Like its competitors, DAF has also had to increase its kerbweight to meet Euro-6, but it has gone some way to negate that with LF City.

With EGR being introduced for the first time by the Dutch for the initial wave of Euro-6s there has been a few issues with the diesel particulate filter and carbon build up blocking the EGR valves, as well as drivers switching off the regeneration device in the cab so it could not deal with the problem.

In 2017 the manufacturer announced that the regeneration switch could only be turned off in ADR vehicles, and rejigged the software so that SCR kicks in at low speeds while the EGR only works at greater engine speeds where there is more heat to burn the particles.
Operators are happy with the fuel economy achieved by LF across the 7.5 tonne range, and the enhanced second-generation aftertreatment system has brought down the AdBlue use.

Although a best seller the LF chassis-cab has a competitive price (it certainly isn’t the cheapest) when bought new, making it a purchase made with the head rather than the heart.

In the second-hand market the 150hp/day-cab with a box body registered since 2012 dominates choice, according to the AutoTrader Truck website. There remains a healthy choice among curtainsided, dropside, flatbed and tipper bodies, with a handful of refrigerated van bodies also available.

Residual prices fade faster than its French, German and Italian competitors but being as ‘cheap as chips’ helps generate a healthy appetite among buyers. Because of the volume it’s more likely that its condition, the tyres and mileage will have a greater effect on its price than its specification.

Any LF with greater horsepower and the automated transmission, or with a larger cab, enjoy a little extra bounce regards residuals.

For those buying a new LF, the warranty is limited to one-year full vehicle and a second-year on the driveline.

DAF Trucks operate 138 service points across the British Isles and Northern Ireland, split between private enterprise and the wholly-owned network. This is the largest network of dealers by any one manufacturer.

At present there only one open recall for the LF from the DVSA; ‘a 5.10 type axle the pinion nut may over an extended period of time become loose due to an undersized pinion shaft spline. This may cause the pinion flange to separate and in extreme cases the differential may seize’.

There are downsides to being so popular; the LF is a common sight and its residual price reflects that. However, its number one in the 7.5 tonne sector for a reason.

It is easy to drive and comfortable, it performs very well on the road and there are more dealers in the DAF network than any other manufacturer.

Changes to the engine software for the second generation of Euro-6s is welcomed and it helps cement its status as a money-earning asset for the owner.

Adding a new entry-level model primarily for the urban environment shows the product range is versatile. At Euro-6 DAF has upped its game and its place as number one appears to be secure.

Browse all our new trucks here. 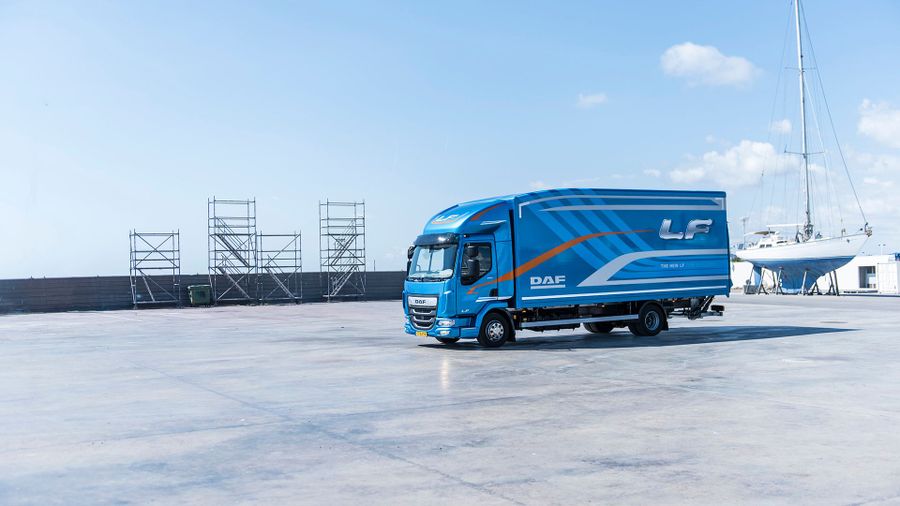